10 Reasons Why Most Men Can’t Handle The Female Empath 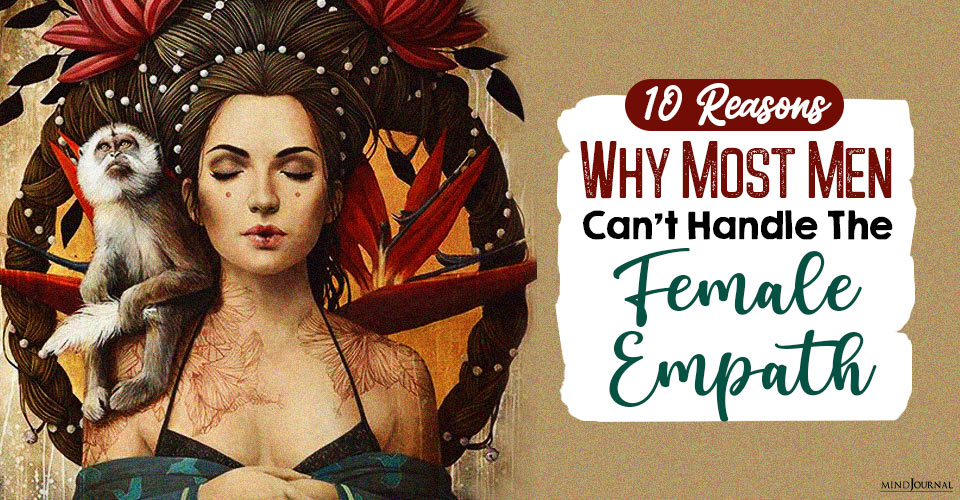 If you are an empath and a woman, then you will always have a tough time finding love in your life, because you will rarely meet a man who will truly understand you and how you work. It’s not a surprise that most men cannot handle a female empath because their hypersensitivity becomes too much for a man to handle.

The more powerful of an empath you are, the harder it gets for men to figure you out. Most men don’t understand the depth of your love and care for those around you. The intense love you show intimidates and scares them, and because they know they cannot handle it, they run away.

Being loved by a female empath is one of the best feelings in the world, but unfortunately, not everyone has the ability to appreciate that or handle that.

1. She has a strong sense of independence.

Society keeps telling men that they are the strong ones, and they are supposed to be the protectors of the fairer sex. Because of this, most men just can’t fathom what it is like to be with a woman who is strong enough to fend for herself and take care of herself. A female empath is perfectly capable of handling anything that life throws at her, and she would do it with a smile on her face.

A female empath doesn’t need a protector or a bodyguard, she wants a partner who will be her true equal. She will protect him just like he would want to protect her. And that is something most men cannot seem to accept.

Female empaths are extremely persevering people who never quit or back down from difficulties; she keeps on finding new ways to deal with them with only victory in her mind. She will never stop fighting for what she wants, no matter how tough the situation might be. She will keep on working hard to make her dreams a reality.

Her inner strength and mental capability are something most men cannot handle, and they feel she is too much for them. Because she wants her life to be in proper order, most men struggle with this, especially those men who suffer from control issues.

Related: 13 Traits Of A Real Empath

Just because she is an empath, that doesn’t make her weak, broken, or incapable. Rather her empathy makes her one of the strongest people in this world. Yes, life can sometimes be more difficult for female empaths, but that doesn’t mean she will be some man’s charity project. She doesn’t need a man to step up and save her.

The weight of her ability is hers alone to bear and she is perfectly fine carrying it all by herself. Yes, a good man can help her share the burden but if he underestimates her by thinking that she is incapable of dealing with it herself because she is a woman and an empath, then she will blow his ego to bits.

4. She struggles with intimacy at times.

It’s a very common thing for female empaths to struggle with intimacy, be it physical or emotional. This is one of the biggest reasons why they have difficult relationships. As a female empath, she is an extremely guarded person who doesn’t trust anyone that easily; a man needs to show her and prove to her that she can trust him fully.

It takes a lot of time for her to open up and be vulnerable in front of someone, and if a man genuinely loves her, he will wait for her to do so instead of rushing her. Pushing her to do something is never going to work, and it will just make her close down more.

5. She has a passionate and intense soul.

Doing things by halves is not an empath’s style. A female empath will pour her heart and soul into everything she does and this includes all of her relationships. She looks for the deeper meaning behind each and every little interaction and when she commits to someone, she commits for a lifetime.

Most men struggle to live up to these expectations and some might not be strong enough to tie themselves to another person in that manner. This is really unfortunate because when a female empath loves you, she loves you with every fiber of her being, and finding a love like that is really rare.