What I Learned While Growing A Moustache 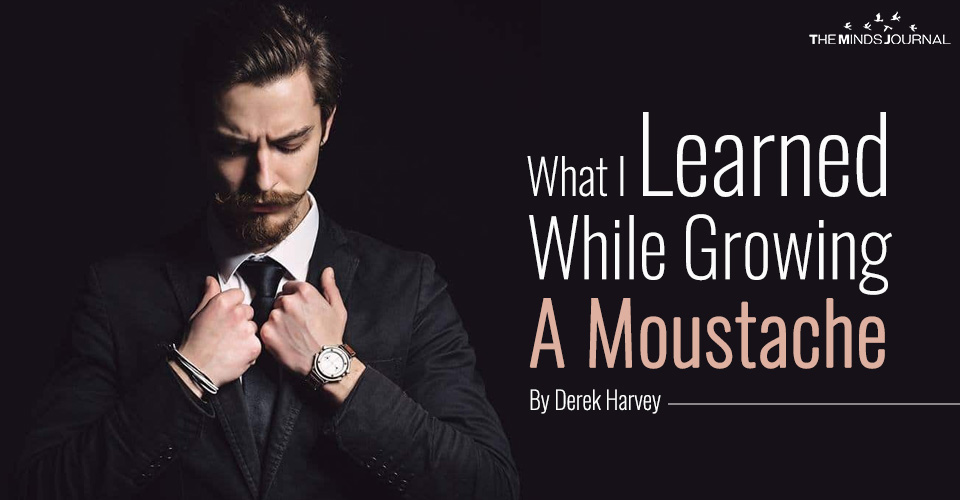 For the month of November, I grew (am growing) a moustache.

I haven’t had facial hair since the last time I grew a moustache, which was 3 years ago.

There’re all kinds of nuisances and annoyances of having a moustache. Those small, coarse hairs annihilate my upper lip like a band of ninjas, stabbing my face with their tiny sword-like points. And the itching…oh, how I loathe the itching. The itching is bad enough, but when I go to scratch I get attacked again from the tiny ninja squad. Oh, the woes of manhood.

But there’s something else that’s also a bit annoying. Growing this sweet ‘stache has revealed yet again, that:

Having a moustache on one’s face can be quite provocative especially when there’s not one normally there. I often do double-takes when passing a mirror, almost frightened by the image. Is that a cop from the 80’s or a criminal? A cop from the 80’s, of course.

But here’s the problem: I don’t talk about prostate cancer or men’s health issues unless someone brings up my moustache. Not because I don’t want to, but because I often forget the moustache is even on my face!

But I’m not sure what I’ve been more bothered by: not bringing awareness to men’s health issues or people ignoring I have a moustache.

Here’s are three different responses from people this month:

This is by far the most popular stance.

Didn’t see me? I look exactly the same. I’m just exercising my facial-hair-follicle-freedom. I have rights, you know!

There’s always this brief pause before a friend or family member says hello or embraces me. It’s like they’re trying to figure out if what is on my upper lip is on purpose or not. I mean, if it weren’t, I’m SURE they’d try to help me out.

“Hey man, you’ve got a caterpillar crawling across your face or something kind of looks like a moustache.”

2. PRETEND IT’S THE COOLEST THING IN THE WORLD.

“Nice work, Derek! Rockin’ the moustache. I like it.”

Don’t lie to me. Seriously. I don’t even like it. If I don’t like it, surely you don’t like it. It’s kind of weird (at least at this stage. not-quite-full-grown-‘stache stage). If you had a daughter, you’d probably try to shield her for fear of me being a creeper.

3. PRETEND YOU’RE MY REAL FRIEND AND TELL ME THE TRUTH.

Only one person did this. While most avoided the obvious, and a few sprinkled on some moustache glory, one friend supported me with the truth.

He laughed out loud when he saw me.

I’m not talking about a giggle or snicker. No, no those are way too gentle of words.

He belly laughed for a good amount of time before he could even speak. And when he did speak, he said,

Now that’s a true friend. Someone who will tell you like it is. Someone who isn’t afraid to hurt your feelings, your pride, or your manhood.

Someone who tells you the truth even when you’re trying to do something for a good cause.

Why don’t people say what they really think or feel? Why do we avoid communicating what we actually want to say?

Read Getting a Professional Profile Picture: The Good, the Bad and the Ugly

MY THEORY? LACK OF CONNECTION.

But unless we become vulnerable, we’ll never truly feel connected. And if we’re not connected, we’ll never actually say or do what we think.

I tell my wife everything. Absolutely everything. All my victories and shortcomings are shared with her. She knows the best of me and the worst of me. And vice versa.

If I intentionally kept things from her, I would damage the connection. And of all the people I need to stay vulnerable with, it’s my spouse.

And the beautiful thing about vulnerability and connection is the freedom that results. You can only be free when you’re willing to be vulnerable.

Yes, you’ll probably get hurt sometimes. But you’ll also experience the deepest, most meaningful relationships of your life.

So the next time you see someone growing a moustache or doing something different, don’t avoid it or pretend to like it.

I'm a husband, father, writer, and leader who is passionate about bridging the gap between our life and our dreams. I want to inspire you and give you hope for your future.View Author posts