How Does A Man Know If He’s Courageous? 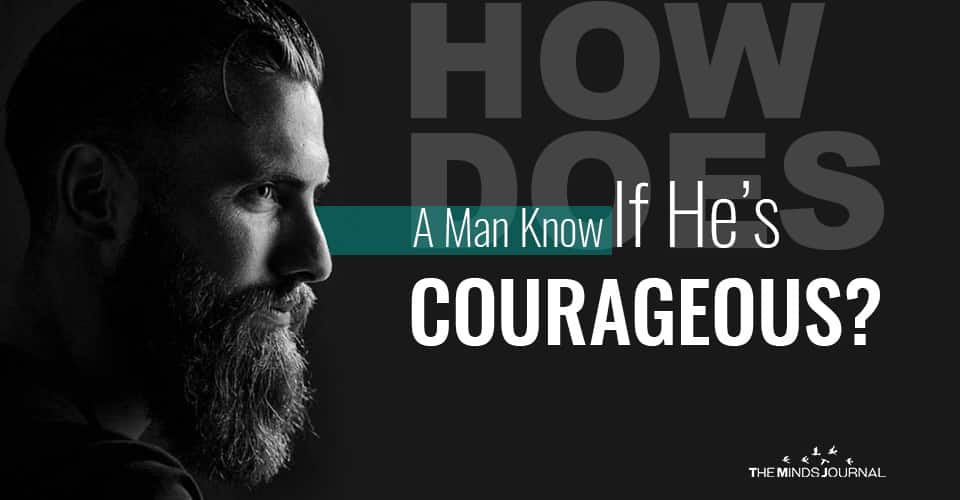 As a man, have you ever felt that you have not had any such experiences in life that made you feel courageous and confident?

How does a man know he’s courageous?

This a plea for a right of passage, a right to feel masculine, and have enough satisfactory proof that it’s unshakably true. Without courage, we shrivel away from things that matter, grow cowardly in our thinking, and fail to meet the challenges that make us strong.

But times have changed! We as men have no fight these days of modern fads and conveniences. We have no World War, no Great Depression, no extreme racism to combat…no worthy battles. No, we’re the fortunate ones living in the “Land Of Opportunity & Prosperity” where anyone can achieve anything, or so we’re told, even convinced. If you’re lacking faith, all you must do is believe in yourself and certainly, it will be so, or better yet, a myriad of coaches and guides exist at your fingertips and for a mere $10,000 (seems to be the magic number), will show you the way to the infinite light of your humanly bliss.

It’s rhetoric! We’ve heard it all before!

We’re in a culture of me-centered, narcissistic first-ness, all blanketed with a spiritual talk on thriving and blissful living. Don’t get me wrong, I’m part of this movement and in some ways support it, so I will not be another writer, cowardly arm-chair-quarterbacking the world with cynicism and careless disregard. On the contrary!

It is just that my good ole’ Texas Bullshit Meter starts redlining when NOBODY speaks of the challenges, the struggles, the aches and pains, and the dust and the sweat of both defeat and victory.

Can we manifest the eternal greatness of the universe? ABSOLUTELY!

Can we tap into the rich storehouse of the divine and experience the bliss of miracles? ABSOLUTELY!

On April 23, 1910, at Sorbonne in Paris, President Theodore Roosevelt delivered this speech that captures the heart behind thriving, titled, “The Man in the Arena.”

“It is not the critic who counts, nor the one who points out how the strong man stumbled. The credit belongs to the man who is actually in the arena, whose face is marred by dust and sweat and blood. He strives valiantly; errs and comes short again and again yet knows great enthusiasm, great devotions. He spends himself in a worthy cause; and, at the best, knows, in the end, the triumph of high achievement.  The man who, if he fails, at least fails while daring greatly, so that his place shall never be with timid souls who know neither victory nor defeat.”

So how does a man forge himself in a time when there are no great trials and no great dilemmas that causes life to hang dangerously in the balance?

We’re a generation of entitled pusses, myself often included. That’s how many men feel and as a result, we must compete on the battlefield of acquisitions and titles being deemed worthy only by the comparisons when we look right and left to look into the eyes of our fellow brother when the starting pistol fires, usually at birth.

We have been fighting, striving, and struggling only to be too tired, hearts full of dismay by the time we reach our promised land.

We men, we’re exhausted. Tired of a changing metric we’ll most likely never hit and living in the agony of defeat since the thrill of victory is short-lived, never celebrated as a new metric is set. Our trust in our women has waned and we too recognize we’ve contributed greatly to their own demise from the pedestals of sacred femininity, requiring our brides to butch-up, get busy, and do the things we’ve failed to do. We’re carrying the heavy yoke of shame and we need (yes NEED!) each other so desperately.

Nobody taught us to just BE, how to find joy in the simplicity of what the Chinese called “chopping wood and carrying water”.  We are kept as wild stallions put out to stud never fully feeling that wreath of victory upon our necks and so we LONG for a celebration that if goes unmet, turns into a brothel of debauchery in grand tribute to our penis. We are only as good as our last race and our personal stock fluctuates in massive proportion to the fad du jour of magazines shoved down our throats while waiting in line to pay for market goods. We escape in drink, in food, in sex, even in things we’re told are “good” such as religion or pleasing another, only to weaken further than last remaining drop of hope buried deep within us as the temporary intoxication fades away leaving the dreaded hangover.