We have all dated people we knew were not right for us from the very beginning. But when it turns into pattern and habit, then you might actually end up in a toxic relationship that may be too messed up to get out of.

Dating is often a fruitless search. Though they are filled with hopes and expectations at the beginning of each relationship, they are too often disappointing and even disillusioning in the long run.

Yet, many single people continue to put huge amounts of their time and energy into every possible option for a long-lasting partnership. Despite multiple setbacks, they keep reaching for that elusive needle in a romantic haystack. When they describe their adventures to me, I’m often amazed and so impressed at how they somehow find the resilience and optimism to keep trying. And yet they do.

The media responds by offering a smorgasbord of ready online adventures. From well-established dating sites to the plethora of ever-new ways to explore the dating market, today’s relationship seekers might easily spend many of their waking hours searching for the one person who someday will make it all worth it.

Because life has other demands, it’s becoming more necessary to predict which options are not likely to work out and to focus on those that may be more productive. Dating profiles try to help by offering carefully designed first-impression packages that help each hopeful subscriber present the most desirable picture possible. Whether they are prescribed “meet-ups” that try to take care of physical attraction drop-outs, “fix-ups” that minimize ghosting because mutual friends are often able to track someone who disappears, or chance encounters that pretty much work or don’t quite early in the connection, most relationship seekers try to use every possibility. 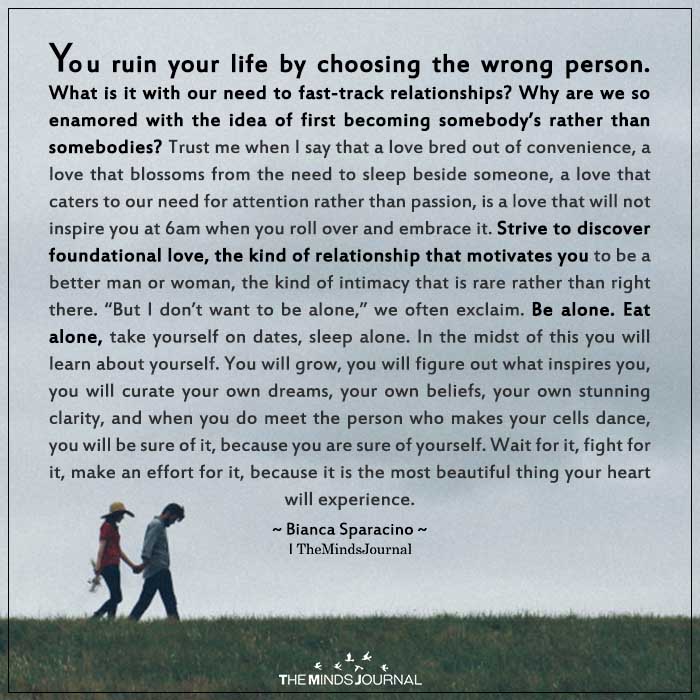 If so many of these honest and willing attempts to find successful romantic partnerships fail so often, what could be an underlying reason that would help ensure better odds?

In my four decades of working with singles and couples, I believe I understand what it is. My premise may not be easy to accept, but if you can courageously consider it, I truly believe that you will be much more successful in choosing the right partner in the future.

To get started, ask yourself how you would answer the following questions:

1) Have your past partners turned out to be who you thought they would?
2) Are you most often attracted to partners who are “out of reach?”
3) Are the qualities you look initially for in a partner those you need for the long haul?
4) Is it important to you that your partners impress others?
5) Is the partner you want available within your current dating options?
6) Are you being realistic in getting what you want based upon what you have to offer?
7) Are your choices more often based more on romantic myths rather than pragmatic possibilities?

Here’s why. Humans are traders by nature. We are programmed to make deals with others. The best of those trades, of course, are those that work well for both. Sometimes they do, but often they do not.

The underlying problem is that many people believe they can make a better deal than they actually are able to. For example, they might think that what they have to offer is worth more over time than it may seem upfront, and they want the other deal-maker to trust in the investment. Or, they’ve been more sought out in a different dating market than in their current one, and haven’t accepted that reality. Maybe their well-intended friends have given them the impression that they are more marketable than they really are. Or, perhaps they’re searching in the wrong places, or it’s just the wrong time in their lives. What if they’ve just happened to move from a location where single people were more plentiful to one with sparser options? It’s even likely that some relationship seekers are simply worth more in one market than in another.

If, many single people aren’t successful because they keep searching or investing in relationships that are not likely to work out, wouldn’t that process be more likely to be successful if they were completely realistic in what they have to offer? If they know who are their likely available prospects, are authentically aware of what they need to keep loving and growing, and have done everything they can to improve their marketability, wouldn’t they have a better chance to find what they seek.

To help you understand how easy it is to be diverted from those more successful encounters, here are some common examples of typically off-the-track experiences that are not likely to develop into significant relationships.

Though it may be more applicable to the younger crowd, the external package is often a high priority for many relationship seekers. Taking good care of yourself is always a good idea, but basic attractiveness is a God-given attribute and some are just luckier than others.

Because many people put more effort into other valuable characteristics when they are not blessed with the top ten percent of physically desirable traits, they often become more attractive over time. But, if someone is only going to maintain interest if the initial package is hot, that growing appreciation may not have time to happen.

If relationship seekers realistically value their physical package as a “seven” on a one-to-ten but keep reaching for a partner who is a clear “ten,” they are going to have to come into that deal “one-down.” That means they have to constantly compensate with their other assets in order to keep that partner around, and may often find themselves contending with new rivals as others emerge who are “more attractive.”

Have you ever noticed a few distinctive signs in your relationship, and realized that you are dating a narcissist?
Read more
Dating

The signs of attraction aren’t hard to read if you know what you’re looking for, and getting a man to notice you doesn't have to be difficult.
Read more
Family

Why Your Narcissistic Mother Hates Your Body

As the daughter of a narcissistic mother, you face countless assaults to your identity, integrity, and individuality. One of the most pernicious forms of assault plays out on the battlefield of your body.
Read more