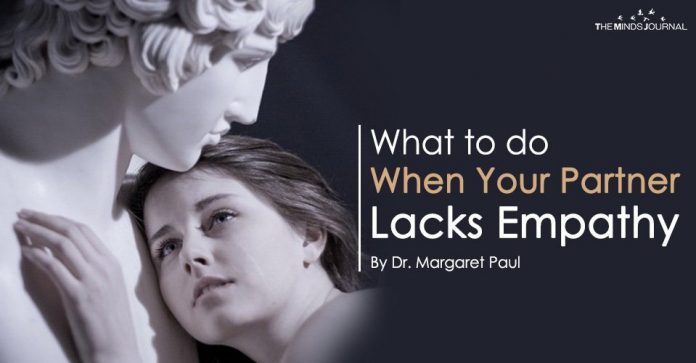 What to do When Your Partner Lacks Empathy

Were you born with the ability to feel others’ feelings? I was, and one of the issues that I had to face was that not everyone is empathic.

This was very confusing to me as a child. In school, I often saw children bullying and making fun of another child. The more the child cried, the more fun they made of him or her. It broke my heart and I would often try to come to the child’s rescue. I was deeply perplexed at how these bullying children could stand feeling the pain of the child or the animal they were hurting. Couldn’t they feel the pain?

I was perplexed too with my parents, who obviously couldn’t feel my pain. How was that possible? Why could I feel their pain and they couldn’t feel mine? I had the same experience in my marriage and it took me many more years to understand that some people either lack the ability to feel empathy, or they shut it down so early in their lives that they have no access to it.

I tend to believe that everyone is capable of empathy, but I don’t know this for sure. What I do know is that many people have learned to shut down their feelings to such an extent that they can’t feel even their own feelings – and they certainly can’t feel others’ feelings.

It’s disconcerting to discover that your partner lacks empathy. This is the situation that Georgia found herself in:

“I was recently involved with a narcissistic man who was completely unable to empathize/care or even think about my feelings and needs. Sometimes I would have to explain how his behavior was affecting me and he would eventually acknowledge he could see how I might feel, but never changed the behavior. Can someone be taught empathy or if they don’t have that ability, they never will?”

Being the optimist that I am, I think it’s possible for people to learn empathy, but they would have to go through an in-depth therapeutic process of reconnecting with their own feelings first and learning to love themselves. In my experience, narcissistic people often do not think they have a problem – It’s always the other person who has the problem. Because they believe they are fine and others are “messed up,” they are rarely motivated to do the inner work necessary to open to their feelings and to others’ feelings. They likely shut down their feelings when they were very young and they might not realize that they lack empathy.

If you are with a partner who is narcissistic and lacks empathy, don’t count on this changing. You need to either accept that this person will likely never truly care about your feelings and the effect their behavior has on you, or you need to leave. Trying to change a person who currently lacks the ability to feel empathy is a waste of time and energy.

Sometimes, a highly sensitive person who shut down their feelings early in life may suddenly find themselves feeling empathy, but I’ve not seen this occur very often, so it’s not something to count on.

One of the hardest things to deal with in a relationship is when you can see the beautiful essence of your partner, but your partner can’t see his or her own essence – or yours. Many people go into relationships because they fall in love with the essence of a person, only to find out that the person’s narcissistic wounded self is in charge most of the time. I’ve often said that we need to be able to acknowledge and tolerate a person’s wounded self – putting it into perspective – in order to create a loving relationship with them. If you are attracted to someone who has narcissistic tendencies but are unable to put their narcissism and lack of empathy into a healthy perspective, then that person isn’t for you – no matter how much you love their essence. Being in a relationship with a narcissist is never easy, and it’s especially difficult for someone with empathic tendencies.

Dr. Margaret Paulhttp://www.innerbonding.com/
CO-CREATOR OF INNER BONDING Dr. Paul is the author/co-author of several best-selling books, including Do I Have To Give Up Me to Be Loved By You, Inner Bonding, Healing Your Aloneness, The Healing Your Aloneness Workbook, Do I Have To Give Up Me to Be Loved By My Kids, and Do I Have To Give Up Me To Be Loved By God Dr. Paul's books have been distributed around the world and have been translated into eleven languages. Dr. Margaret holds a Ph.D. in psychology and is a relationship expert, noted public speaker, workshop leader, educator, chaplain, consultant, and artist. She has appeared on many radio and TV shows, including the Oprah show. She has successfully worked with thousands of individuals, couples and business relationships and taught classes and seminars since 1967. Margaret continues to work with individuals and couples throughout the world on the phone and on Skype. She is able to access her own and her client's spiritual Guidance during her sessions, which enables her to work with people wherever they are in the world. Her current passion is working on and developing content for this Website, as well as distributing SelfQuest, the software program that teaches Inner Bonding and is donated to prisons and schools, as well as sold to the general public. Margaret Paul, PhD information Anxious, Depressed, Addicted, Empty, Relationship struggles, Inner Bonding - The Power To Heal Yourself! http://www.innerbonding.com
-Adverts-