The Pull And Push In A Relationship With A Narcissist 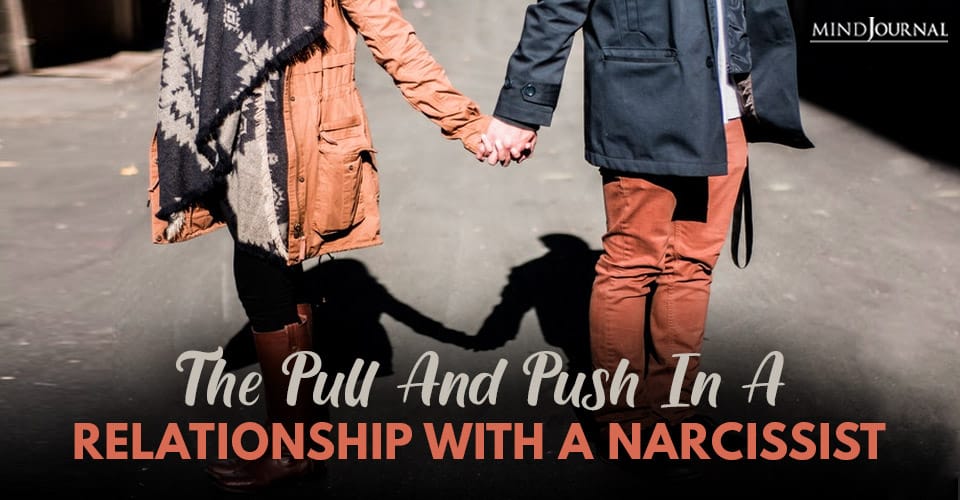 A relationship with a narcissist can be likened to a returning boomerang, ‘a weapon designed to return to the thrower.’

The narcissist’s relationships follow a pattern where they pull you into their web with their apparent charm, wit, kindness, and generosity only to sabotage it all for no obvious reason.

Then, when all seems lost, they switch on the charm again and things return to those initial stages where everything is perfect once again….TEMPORARILY.

These sick and twisted mind games are highly effective methods of manipulation and mind control.

They play with your feelings and emotions. Why? To feed their never-ending need for narcissistic supply and to get a reaction from you, positive or negative. The way they feel about themselves dictates how they treat you. Whether you deserve it or not is not on their agenda.

The Cycle Of Mind Control

Narcissists don’t ‘do’ solitude. They need a company like a car needs fuel. They thrive on narcissistic supply, good or bad, positive or negative, and cannot function properly without it.

The person with NPD wants to get you hooked and will initially appear considerate, amusing, generous, even kind. They will share the same interests and values (mirroring) and if it’s a romantic liaison, they’ll sweep you off your feet. Yes, you’ve met your Princess or Prince Charming.

During this phase known as ‘love bombing,’ you can’t believe your luck in meeting someone who shares your dreams and promises you the world. It’s too good to be true!! Sadly, it’s not. It’s not real.

The narcissist gets bored easily. All the positive supply and adoration is wearing thin. It’s not enough. You’re not doing enough. It’s certainly not their fault and it never is. They blame you. You need to suffer for not giving them the adoration and attention that they believe they deserve.

They will shout or fire insults in your direction in an attempt to provoke you, to hurt you, in an attempt to get you to beg them, to plead with them. If you should happen to let them see those tears as they roll down your cheeks, they’ll be moved, moved to the point of total satisfaction.

You may even be subjected to their favorite weapon, the silent treatment. You don’t deserve their acknowledgment. Their silence is justifiable. As you plead for an explanation, want to know what you’ve done wrong, and promise to do whatever it is to put it right, their fragile ego is given a much-needed boost.

They’ll keep up this behavior for just long enough, long enough to teach you a lesson and pray for their return but short enough so that they won’t lose you, not just yet!!

Now we’ll go back to the beginning. They’ll switch on the charm and you’re back in the web, relieved that once again you’re back where you should be. Everything will be perfect for a while…Until the next time.

The to-ing and fro-ing between being treated well and being treated badly over a period of months or years wrecks havoc with your emotions. A state of confusion doesn’t even come close to describing how you feel. This goes beyond bewilderment as to why this is happening.

And yes, the narcissist is loving every minute. They planned this from the outset. They are masters of manipulation, practicing their tactics in each and every relationship. If the narcissist has done their job well, you may find yourself with no one to turn to, no friends, no family, they have isolated you from everyone you held dear.

If the narcissist believes that you have figured them out and it’s not quite the right time to let you go, they will do everything to keep you from going.

They may promise to change… They won’t.

They may offer to seek help… They don’t need help, they’re perfect the way they are.

They say that it will never happen again… It will.

They may apologize… It’s not sincere.

These are all desperate measures to keep you from leaving. You are not at liberty to decide when the relationship ends. That’s their prerogative.

Related: The Relationship Patterns of the Narcissist: Know the Signs

Eventually, you will decide you’ve had enough of the control and the mind games and you’ll leave the narcissist or they will abandon you in the most callous manner that you can think possible. Either way, it’s not the end.

Don’t fall for their attempts to resurrect the past. It’s futile. Protect yourself, protect your heart. The outcome has already been decided.

‘Never run back to the one who almost brought you down.’