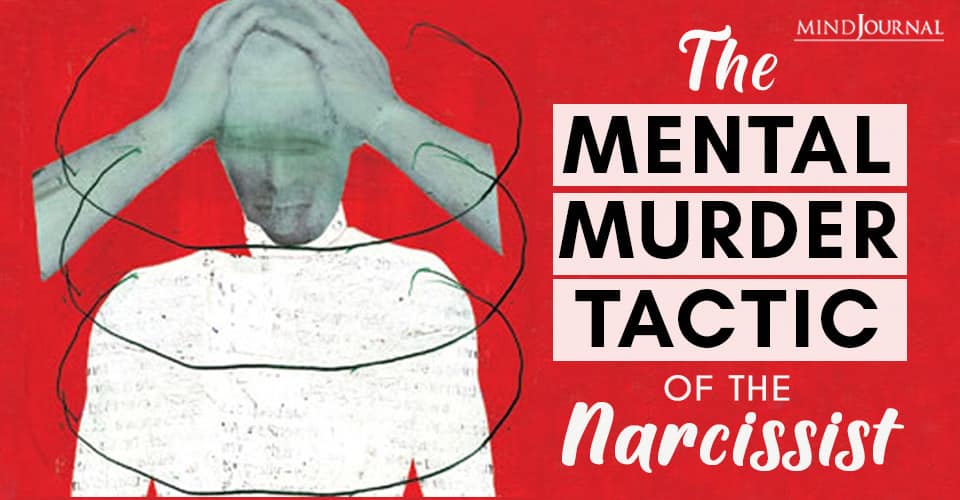 Narcissists have a mental murder tactic that can kill you!

“Narcissistic personality disorder is named for Narcissus, from Greek mythology, who fell in love with his own reflection. Freud used the term to describe persons who were self-absorbed, and psychoanalysts have focused on the narcissist’s need to bolster his or her self-esteem through grandiose fantasy, exaggerated ambition, exhibitionism, and feelings of entitlement.”
― Donald W. Black, DSM-5 Guidebook: The Essential Companion to the Diagnostic and Statistical Manual of Mental Disorders.

Whom do narcissists love most? Themselves.

Whom do narcissists love after themselves? Themselves.

Who can they think of apart from themselves? Nobody.

For a narcissist, it’s always I, Me and Myself.

But, this core composed of I, Me, and Myself is covered by a thick layer of charisma. People around them find them as dashing, admirable, intelligent, wit. They roam around with an aura of elegance and have a really big group of followers who are always busy pleasing and flattering their narcissist leader. It is this image a narcissist carries around.

Related: Why Are Narcissists So Dangerous?

But this is fake. Whatever you are seeing is an illusion because the narcissist is not the person they pretend to be. They are good orators and can convince people, manipulate them. Will all these misleading appearance and manipulative skills, they master the art of illusion.

If you believe in them, you are just becoming a victim of their illusionary tricks. A narcissist, after all, is the master of illusion.

What’s most important to the narcissist is to keep on enhancing this outer charming layer of their identities. That’s where you come in, like a make-up box or an accessory. As long as you can amplify their charm, you are useful to them. When you fail to do so, you are just removed from their lives. Even if you can keep on intensifying their charm, there are chances of you being thrown out. If you hold the risks of revealing the persona behind the charming face, you will be eliminated from their lives because a narcissist is always suffering from the insecurity that their true image will be ruined.

Related: The Effects of Gaslighting in Narcissistic Victim Syndrome

They will trash you in such a way as if you never existed at all and the emotions they shared with you have vanished like camphor all of a sudden. For them, relationships matter as long as they could be beneficial only for them.

Love for a narcissist is self-love.

A narcissist falls in love with a person who can add value to their lives but has no intention of reciprocating the same. It doesn’t matter what kind of relationship you share with the narcissist. You might be a spouse, a child, a teacher, or a friend. If you stop being useful to their lives, they are going to replace you soon. They don’t care about the good moments spent with you. They might have said something which you thought were reciprocations but in reality, they were as fake as the character they carry.

Related: The Narcissistic Personality: Understanding Them And Ways To Better Tolerate Them

A narcissist wears marks all the time.

But if you have an intimate relationship with them, you will get to see their real self…a self which is extremely cruel, egoistic, and self-absorbed. Once they are exposed in front of you, they will try to kill you before you kill them by revealing their true form in front of others.

According to Dr. Keith Ablow,

some narcissists believe that this exposing of their masks is the same as killing them because the outer veil they wear will be ruined and will make them non-existent and they will delve deep into emotional traumas that have their roots in the past.

Related: The 3 Kinds of Narcissists To Watch Out For and Ways To Deal With Them

How do they commit this psychological murder?

They will criticize you harshly; they will ignore you and point out flaws in everything you do. They will make you feel unwanted and fail. Their mental murder tactic also involves blaming you for every negative thing that happens to them and manipulating you into thinking that you are the one who needs to change. They will use all your dark secrets against you till you start devaluing yourself, lose your self-esteem, and self-confidence.

They kill you psychologically and you fall into depression.

But they don’t know who they are themselves. They have fake accomplishments to prove to others that they are great. They believe in their lies, in these worlds constructed by themselves. You were a threat to their lies, to their world. Hence, they removed you by killing you off.

Feel free to share your thoughts about the mental murder tactic used by narcissists to kill you in comments below.