7 Painful Truths About Narcissists All Empaths Must Acknowledge 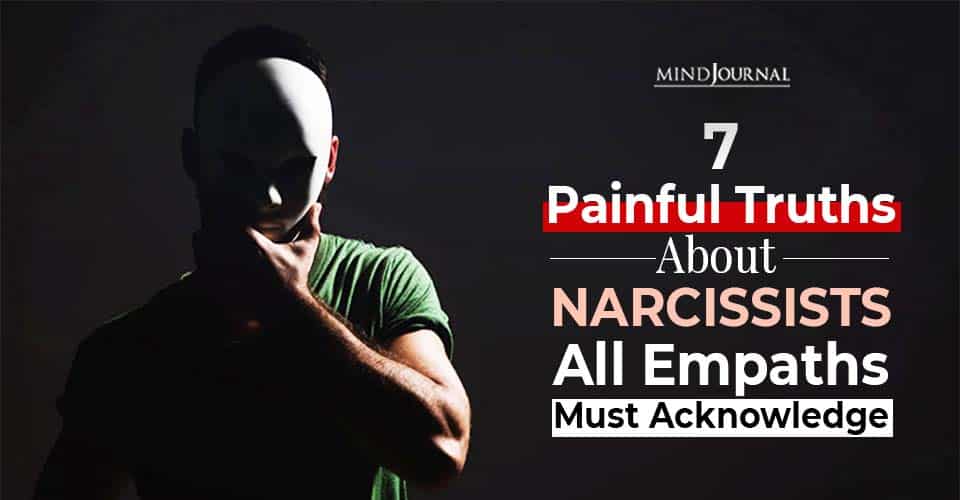 Are you an empath and have you ever been in a relationship with a narcissist? How long was it till you found out the real truths of narcissists?

It’s no secret that Empaths feel it’s their obligation to save the world.  And when they’re being manipulated by a Narcissist, this sense of obligation becomes their whole identity as the Narcissist plays the victim to excess.

What a heavyweight we carry when we decide to take on the burden of another person’s choices or life.

It’s crucial for Empaths to acknowledge that Narcissists are disordered.  When we support them, we are either knowingly or unknowingly supporting a lie, as the person, we think we’re helping doesn’t really exist.

While this fact alone is hard enough to swallow, the following are seven more painful truths that all Empaths must eventually face about Narcissists.

1. The narcissist isn’t a tortured soul who needs your special kind of love.

Almost every Empath who’s ever been in a relationship with a narcissist has held the belief that if they could just show the narcissist how deep their unconditional love ran, then the narcissist would finally have an epiphany where he or she realized that there is a special and rare kind of love available to them, after all.

The love of an Empath certainly has its healing qualities, but it does nothing to change a narcissist’s behaviors or motives in the relationship. Narcissists are morally bankrupt individuals who do not appreciate the things other people do for them.

Instead, they feel completely entitled to whatever love and devotion are directed towards them. Almost every person the narcissist has been involved with gave them this unconditional love but, sadly, narcissists consider such love and devotion disposable.

Want to know more about the truths about narcissists? Read Projection: The Lethal Weapon Narcissists and Abusers Use To Target Empaths

2. Although everyone admires and appreciates your compassionate nature, it also makes you highly attractive to narcissists.

If everyone in the world boasted an Empath’s qualities, we’d live in a Utopia.  But, sadly, the world is full of manipulators who seek out and exploit people with the Empath’s character traits, such as these:

Narcissists look for cooperativeness and compassion in partners because they know that they themselves don’t possess these traits at their most basic level, and excessively cooperative partners will put in the work of two people to keep the relationship going, projecting their own desirable traits onto the narcissist, thereby filling in the yawning gaps in order to make the relationship seem more normal.

This high level of cooperativeness is the most significant trait narcissists look for in partners because they intuitively know that such partners will stay in the relationship with them way beyond reasonable limits.

Empaths are deep thinkers who possess highly evolved viewpoints about people and the world. It’s hard to find anything that makes an Empath feel more alive than finding a kindred spirit to share their thoughts and opinions with.

Narcissists put on a good show, pretending to be enlightened and advanced in modern philosophies, but the truth about their close-minded dogmas is eventually discovered which profoundly shatters the Empath’s heart. Worse, once the relationship begins to sour, the narcissist typically mocks and ridicules the Empath for his or her views and theories.

4. The narcissist is your soul mate, but not in the way you’d hoped.

A person with whom you have an immediate connection the moment you meet — a connection so strong that you are drawn to them in a way you have never experienced before. As this connection develops over time, you experience a love so deep, strong, and complex, that you begin to doubt that you have ever truly loved anyone prior. Your soulmate understands and connects with you in every way and on every level, which brings a sense of peace, calmness, and happiness when you are around them.

Unfortunately, this is not the true definition of a soul mate.  A soul mate’s true purpose is to bring all your wounds, fears, and insecurities to the surface so you can reconcile them.  Don’t mistake this to mean that there is a healed future with the narcissist. They were only meant to be in your life for a season.

Looking to know more about the realities of a relationship between an empath and narcissist? Read The Empath, The Narcissist And The Brutal Reality Of Their Toxic Relationship

5. The narcissist is not the “runner” in what you thought was a twin flame relationship.

Many empaths mistake the dysfunctional undercurrents of a relationship with a narcissist as those of the twin flame runner/chaser dynamic.

Narcissists take advantage of this mistaken belief, using it as a great window of opportunity to disappear from the Empath so they can groom other supply or generally live life on their own terms, which includes pretending to be in a committed, progressive relationship, all while they secretly live life as a single person behind the Empath’s back.

Narcissists excuse themselves for this covert behavior by claiming they love the Empath too much and are frightened by the depth of their love, hence why they feel inclined to “run”.

6. Even if you and the narcissist made contracts together before this lifetime, you must accept the necessity to move on without them.

In the spiritual scheme of things, many people believe narcissists are put in our lives to help us evolve into healed, cosmically aware individuals.

While that may be true, we must recognize when it comes time to sever those ties and vows with the narcissist, which feels devastating for any Empathic individual with strong moral codes. Whereas Empaths want to soothe the narcissist’s hurts and help them feel secure, the narcissist simply wants to siphon the Empath’s compassionate energy like fuel for an engine.

Even after the relationship ends, the energetic ties remain, despite the amount of time that elapses.  And even though you may be apart from them now, you’re still deeply bonded to them energetically. This can drain your energy, as well as cause symptoms of depression and hopelessness.  Therefore, it’s critical to cut the energetic ties with the narcissist so you can move on.

Want to know more about the truths of narcissists? Read Why Empath and Narcissists Are Attracted To Each Other

Most Empaths hold these common beliefs about love and relationships:

Where there’s a will, there’s a way.  Love conquers all.  Everyone has some good in them and deserves the benefit of the doubt.  If you want to be forgiven, you must forgive.  The Ex didn’t have any family or friends, and now I’ve “abandoned” them, too.  I wasn’t perfect, either.

These nuggets of insight might apply to other areas of life, but not to toxic relationships.  Why? Because it gives Empaths another way to torture themselves.

It doesn’t matter if you were with your Ex for two, ten, or thirty years, it’s time to accept that you did everything within your power to salvage the relationship. The misguided fear that you could have done something differently is based on your toxic Ex having changed the goalposts continuously– and yes, it was deliberate.  This explains why every single Empath believes there is something else they could have done to save the relationship.  It’s a result of conditioning — and overwriting this belief will be part of your healing journey.

Living a healed, balanced, and happy life means accepting these painful truths, even though the Narcissist cannot.  They can’t be healed because for that to happen, they’d first need to acknowledge they are wounded.  Instead, Narcissists use fear, obligation, and guilt (FOG) to keep their targets perpetually catering to their every whim…and overlooking lies and broken promises.

Copyright © 2017 by Kim Saeed and Let Me ReachThis article was originally published on the Let Me Reach website and has been printed here with the author’s permission. Narcissists are not good people from the inside and empaths always learn this the hard way. If you are an empath, and you are in a relationship with a narcissist, then you need to put yourself first and let them go. After, your inner peace and happiness is what matters the most. If you want to know more about the truths of narcissists, then check this video out below: