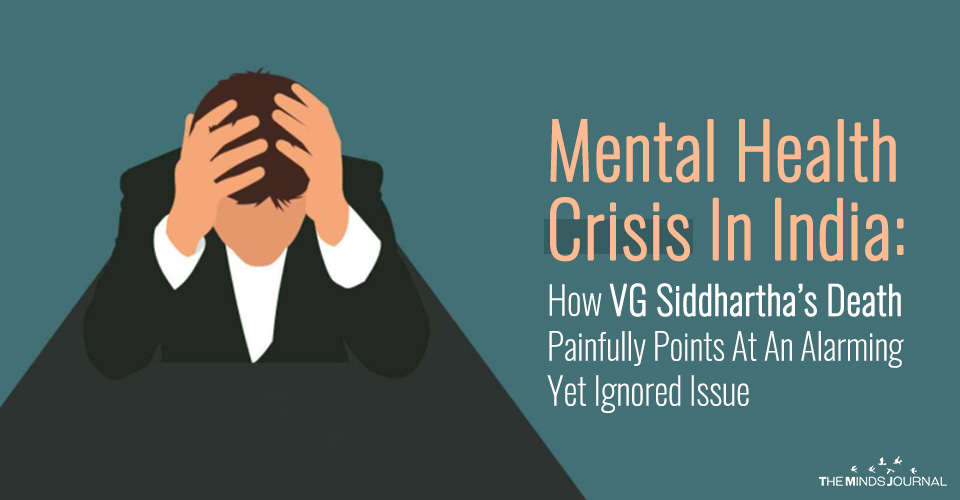 What drives a person to take his own life? What makes a successful entrepreneur to commit suicide? Is it just the money? No. There is a much darker side to anxiety and depression that can force anyone to take the extreme step.

“I have failed as an entrepreneur. This is my sincere submission, I hope someday you will understand, forgive and pardon me,”

– VG Siddhartha, the founder of CCD (Cafe Coffee Day), the popular coffee chain allegedly said in a letter he sent to the board of directors and employees.

The purported note and the tragic suicide of Siddhartha once again brings the focus back on mental health and the lack of understanding about the importance of mental well-being. In India, the statistics related to suicide is alarming with at least one student committing suicide every hour. Moreover, there is one suicide attempt made by someone every 3 seconds in India. The untimely death of the CCD founder now proves that it is high time that we take notice, remove the stigma around mental illness and spread awareness on the importance of mental health for our survival.

Indian coffee tycoon VG Siddhartha was reported to be missing on 29th July, 2019. Reports said that Siddhartha left his car near the Nethravati River, Mangaluru, Karnataka with his driver still in the car. After he was gone for over an hour, his driver panicked and called the police over his mysterious disappearance. Sadly, his deceased body was found by fishermen in the early morning of 31st July after an intense search. The police now claims that Siddhartha committed suicide due to financial pressure and depression.

In a letter believed to be written by the CCD founder on 27th July, he apologised to the stakeholders, the board and the employees. The letter clearly points to the struggles he faced both financially and mentally. It is reported that he had a massive personal loan amounting to INR 1,000 crore. The letter stated –

“After 37 years, with a strong commitment to hard work, having directly created 30,000 jobs in our companies and their subsidiaries, as well as another 20,000 jobs in a technology company where I have been a large shareholder since its founding, I have failed to create the right profitable business model despite my best efforts.”

“I would like to say I gave it my all. I am very sorry to let down all the people that put their trust in me. I fought for a long time but today I gave up as I could not take any more pressure…”

This is not an isolated incident. Unfortunately.

The current statistics on suicide rates in India clearly show that the tragic death of Siddhartha is not a one-off case. According to the British Journal The Lancet,

“Suicides in India are a public health tragedy in need of a plan”.

Over the past few years several seemingly successful entrepreneurs have taken their own lives due to anxiety and depression, driven by the failure of their business ventures.

Sadly, that’s not all. In the present economic situation, CEOs, MDs, entrepreneurs and top-level managers are more prone to anxiety and depression due to various financial and business-related pressures. Hence, these individuals are more susceptible to mental illness.

From farmers, businessmen, celebrities and students to every single individual in the country can experience depression and start having suicidal thoughts resulting in tragic and untimely deaths. The statistics of suicides in India is simply too monumental for us to ignore the impact of mental health in our lives and the lives of our loved ones.

We are facing a serious mental health crisis here. VG Siddhartha’s suicide once again put the spotlight on depression and suicidal tendencies even in entrepreneurs and celebrities, not just poor farmers. Around 800,000 people commit suicide globally every year and among them about 135,000 individuals are Indian residents. According to the 2018 The Lancet Public Health report, India accounts for over one fourth of global annual male suicides and around one third of annual female suicides. In 2016, 130,000 people took their own lives in India, as per the National Crime Records Bureau.