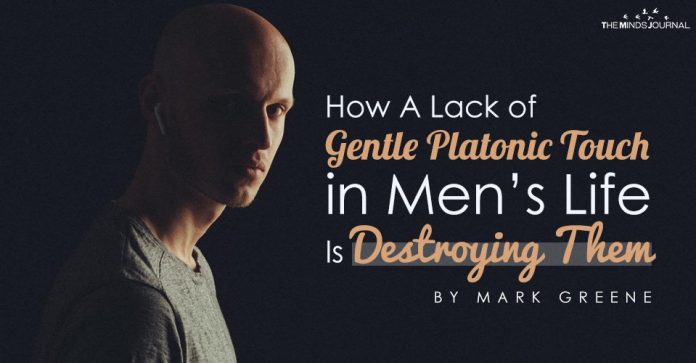 Is it really true that a lack of gentle platonic touch in men’s life is making their life troublesome?

Mark Greene explores how in American culture, men avoid all contact rather than risk even the hint of causing unwanted sexual touch.

In preparing to write about the lack of gentle touch in men’s lives, I right away thought, “I feel confident I can do platonic touch, but I don’t necessarily trust other men to do it.

Some guy will do something creepy.

They always do.” Quickly on the heels of that thought, I wondered “Wait a minute, why do I distrust men in particular?” The little voice in my head didn’t say, “I don’t necessarily trust people to not be creepy”, it said, “I don’t trust men.”

In American culture, we believe that men can never be entirely trusted in the realm of the physical. We collectively suspect that, given the opportunity, men will collapse into the sexual at a moment’s notice.

Those men don’t know how to physically connect otherwise. Those men can’t control themselves. Those men are dogs.

There is no corresponding narrative about women.

Accordingly, it has become every man’s job to prove they can be trusted, in each and every interaction, day by day and case by case.

In part, because so many men have behaved poorly. And so, we prove our trustworthiness by foregoing physical touch completely in any context in which even the slightest doubt about our intentions might arise.

Which, sadly, is pretty much every context we encounter. And where does this leave men?

Physically and emotionally isolated. Cut off from the deeply human physical contact that is proven to reduce stress, encourage self-esteem and create community.

Instead, we walk in the vast crowds of our cities alone in a desert of disconnection. Starving for physical connection.

We crave touch. We are cut off from it. The result is touch isolation. 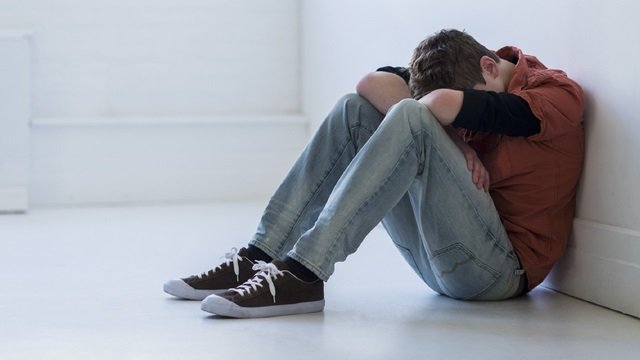 How often do men actually get the opportunity to express affection through long lasting platonic touch? How often does it happen between men?

Or between men and women? Not a hand shake or a hug, but lasting physical contact between two people that is comforting and personal but not sexual.

Between persons who are not lovers and never will be. Think, holding hands. Or leaning on each other. Sitting together. That sort of thing. Just the comfort of contact.

And if you are a man, imagine five minutes of contact with another man. How quickly does that idea raise the ugly specter of homophobia? And why?

While women are much freer to engage in physical contact with each other, men remain suspect when they touch others.

There is only one space in our culture where long term platonic physical contact is condoned for men, and that is between fathers and their very young children.

I found this kind of physical connection when my son was born. As a stay at home dad, I spent years with my son. Day after day, he sat in the crook of my arm, his little arm across my shoulder, his hand on the back of my neck.

As he surveyed the world from on high, I came to know a level of contentment and calm that had heretofore been missing in my life.

The physical connection between us was so trans formative that it changed my view of who I am and what my role is in the world.

Yet it took having a child to bring this calming experience to me because so few other opportunities are possible to teach men the value and power of gentle loving touch.

As a young child and as a teenager, contact between myself and others simply didn’t happen unless it came in the form of rough housing or unwelcome bullying.

My mother backed off from contact with me very early on, in part, I think, due to her upbringing. I can only guess that in her parents’ house physical touch was something for toddlers but not for children past a certain age.

Add to that, the fact that my father was absent due to my parents’ divorce and years of work overseas, and it meant I grew up without being held or touched

This left me with huge insecurities about human contact.

I was well into my twenties before I could put my arm around a girl I was dating without first getting drunk. To this day,

I remain uncertain about where and how to approach contact with people, even those I consider close friends. It’s not that I can’t do it, it’s just that it remains awkward, odd. As if we all feel like we’re doing something slightly… off?

Contact with male friends is always brief, a handshake, or a pat on the back. Hugs with men or women are a ballet of the awkward, a comedic choreography in which we turn our groins this way or that.

Shoulders in, butts out, seeking to broadcast to anyone within line of sight that we are most certainly not having a sexual moment.

We’re working so hard to be seen as sexually neutral that we take no joy in these moments of physical connection.