6 Ways To Deal With Arrogant People 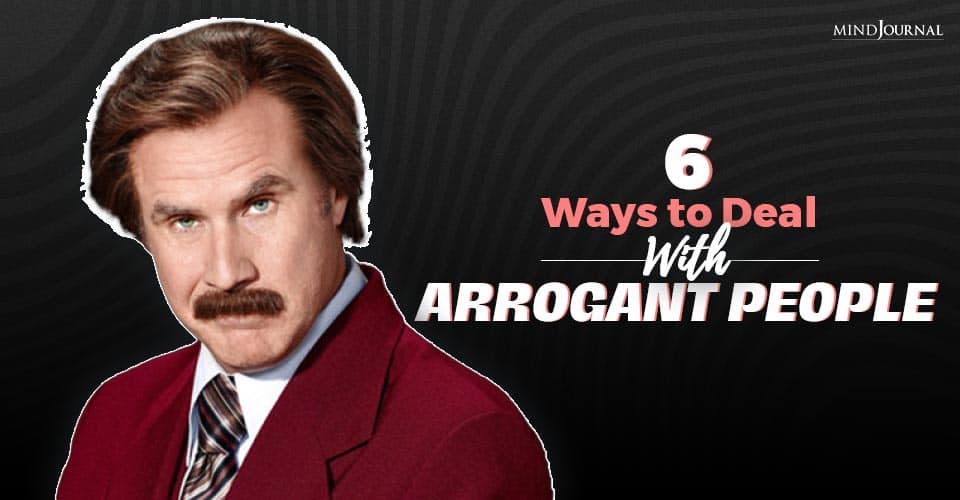 If you have ever had to deal with arrogant people, you will know just how exasperating and annoying it can be. But fortunately, there are certain ways that can help you deal with people who have arrogance seeping out of their pores.

In my understanding, happiness is not a feeling, but the experience of interrelatedness and focused attention. One of the ways to be unhappy is to inhibit our innate ability to relate to people and prevent a sense of “togetherness.” This happens when we are arrogant.

Arrogance creates interpersonal distance and is defined by the Cambridge dictionary as “the quality of being unpleasantly proud and behaving as if you are more important than, or know more than, other people.”1

Arrogance is weaponized pride if you will. Unlike healthy pride — an appropriate celebration of personal or communal accomplishment — it pushes people away.

How do we know the difference between pride and arrogance? After dealing with an arrogant person, we do not feel like rejoicing. Something warns us that the other might or already does harm us to keep alive his or her alleged superiority.

While arrogance can remain a hidden, temporary, and for some a relatively harmless quality, it can also lead to spreading rumors, poisoning the well, attempts to ostracize others, and overt abuse.

Just as no one likes a braggart (see 5 Ways to Deal with Someone Who Never Stops Bragging) no one really likes arrogant people. They tend to throw out toxic darts to assert their position of imagined superiority — and make no mistake about it, their superiority is indeed imagined. Even if they knew more, which often they do not, life cannot be measured.

Life is a splendid non-thing that escapes definition and category; levels of skill do not translate to levels of worth. We reflect the glory of life, but one cannot claim a greater piece than another. The glory is indivisible.

However, such insight protects only so far against arrogant toxicity. What can we do when encountering an arrogant person? Hate or gossip brings short-term relief but long-term unhappiness. Here are some suggestions that preserve your own sense of interrelatedness and mental focus (happiness) while still standing strong and confidently against the consequences of harmful arrogance in your life.

Here Are 6 Ways To Deal With Arrogant People

1. Be compassionate, but don’t try to fix the person.

The need for superiority is deeply rooted and ranges from low self-esteem to an unquenchable thirst for praise to a lack of empathy for those who are or appear to be less accomplished. Only the arrogant person can confront such a problem with sustained effort.

On the other hand, and as always, it brings peace to your heart and potentially to the situation if you can have compassion for the unhappiness of others.

2. Accept the fact that the other indeed feels superior.

There is nothing you can do in the future or have done in the past to make him or her arrogant. He or she suffers from a problem that goes far beyond you. Most important, understand that accepting feelings of superiority in another person does not mean that you must feel inferior in turn. Look at it as a game that you can refuse to play.