Why You Should Forget What You Have Learned About Narcissists 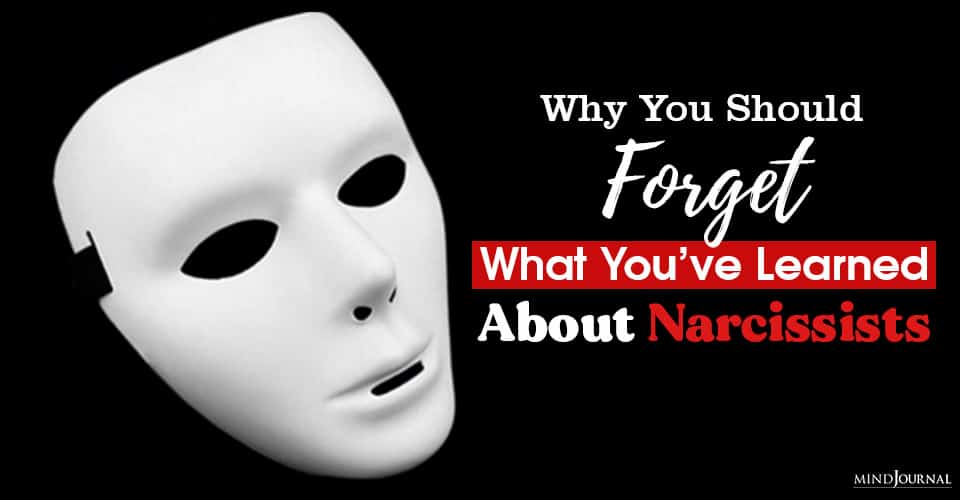 Narcissists do not seek out partners. They are not involved in meaningful relationships. Instead, they are puppeteers in their own theatrical performance. It’s time to forget what you have learned about the narcissists. Here’s why….

The people in narcissists circles are just unknowing actors, and the world is the stage. To the narcissist, these performers are not seen as actors, but as inanimate objects resembling humans. By the time you might find yourself in this terrifying act, you have already realized that it is not an improv show. The narcissist writes the script, which is confusing and often not even given to you. Your role constantly changes without warning, and there is no stunt double absorbing the painful blows for you.

Initially, there is no seemingly obvious way out of the dark theatre that is your new reality. You may find yourself scanning your surroundings in search of an exit, but this isn’t a typical theatre. This one is full of funhouse mirrors, dark holes, booby traps and mystifying mazes. You might find yourself anxiously anticipating intermission so that the lights will come on and your can get up, identify a way out, and run from the drama. Relax, and know that you have access to the wisdom and empowerment that will turn the lights on for you.

It is impossible to escape from a relationship with a narcissist completely unscathed. Awareness about these anti-social predators is spreading, albeit long overdo, so more people than ever are gathering facts to better inform themselves of the warning signs that can alert them to the danger, and allow them to get out early. Simply studying the more common, predictable behaviours of narcissists, can actually lead you to ignore the life-saving, relationship red flags.

Read How You Can Be Sure You Are Not The Narcissist: Your Proof

While there is no one-size-fits-all narcissistic guideline, there are certain characteristic behaviours that appear to describe the majority of narcissists. So, forget what you learned about narcissists.

They will certainly not be all-inclusive, or thoroughly explained here, however, these are a few of the misunderstood behaviours that are all too often incorrectly explained for those who are looking to avoid falling into the trap of these deceitful individuals in the first place.

1. Narcissists accept no responsibility for their behaviours.

If they experience something displeasing, it is the result of something someone else did. They will never admit their wrongdoings, and because they never make mistakes, they will never apologize for their behaviours.

However, this is not the case during their inventing phase: the time when they get to completely recreate a whole new story, a whole new persona, a whole new life with their not-so-lucky someone new. A narc will apologize often when caught up in the throws of this romance.

They will make many carefully calculated mistakes, both large and small, offer a pitiful, vulnerable or even seemingly heartfelt apology each time, and then move on as if an apology is all that is needed. This is part of the grooming process, where they test you and how far they can take their behaviours and still get you to offer forgiveness.

Read The Empath, The Narcissist And The Brutal Reality Of Their Toxic Relationship

2. Narcissists will speed through the beginning stages of a relationship, heading straight to the “I love you’s”.

They can easily appear as your dream guy since they are merely mimicking your own emotions and ideals back to you. They will constantly bombard you with flattery, communication and attention, and seem to be admiring you from every angle.

This is not my experience with these sociopathic beings, and certainly not how it feels from the inside looking out. These may be true for the first couple of encounters, but will quickly drop off, and only return when it is necessary to keep you hanging on.

While it might be clear to outsiders that the budding connection is moving quickly (i.e. moving in together after just a few months), it can actually feel like a drawn-out and exhausting process while you’re experiencing it.

Brandy Fuller Anderson is a counselor, coach, author and victim advocate from Phoenix, Arizona, where she is a single mother to three amazing children. After ten years of graduate education in clinical psychology, and nearly two decades of experience working in counseling, social work, and other social services, she now dedicates her time to her online and Arizona based private practice, writing on communication issues, conflict resolution, infidelity and narcissistic abuse, and spreading awareness on psychopathy and hidden abuse. She has been deemed a credible author and speaker on narcissistic abuse based primarily on her own encounters with a narcissist and ability to offer therapeutic writings for laypeople.View Author posts