An Open Letter To All Shitty Husbands 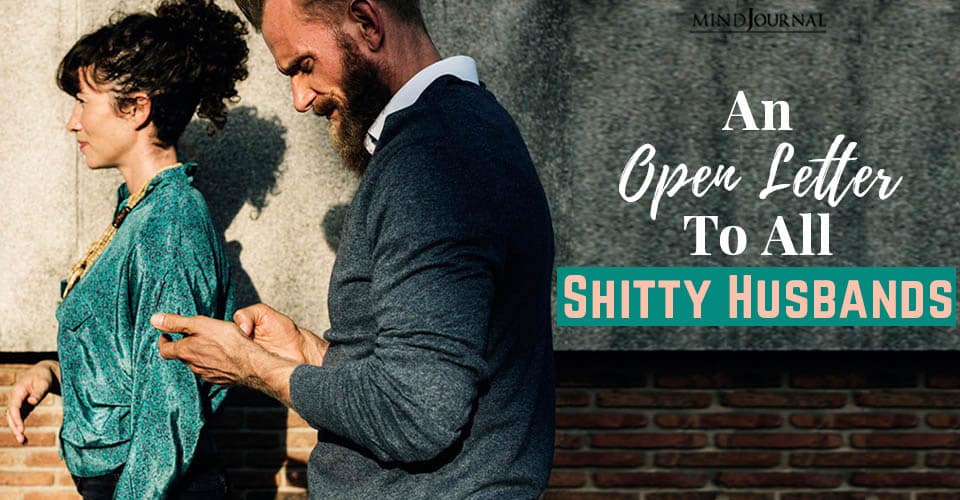 Are you paying close attention to your partner’s needs? Are you playing an active role in your relationship? What if you’re turning into one of those shitty husbands in the world? Gear up before it’s too late to know that your relationship was ending.

My wife felt unsafe because she could no longer trust me.

She didn’t stop trusting me because she worried I might have sex with someone else.

My wife stopped trusting me because she determined that I could not be counted on to be the partner she needed. As a parent. As a housemate. As a lover. As a financial partner.

It wasn’t the big things that brought her to that point. There often aren’t big things in marriage.

She was a youthful, fun, vibrant, happy, joyful young woman.

I begged and pleaded for the girl I knew to come back once I stopped recognizing her. I grew sad and angry when she couldn’t or wouldn’t. I blamed her for not trying.

But I think maybe she wanted to. I think she wanted to feel like her old self again. But she simply couldn’t.

Because she couldn’t trust me.

So she kept her guard up.

Because she didn’t feel safe.

Men (I) Have a Problem

And I think maybe women have this same problem but because of the state of the world in which we live (where men sometimes literally believe they’re better than women), I think the male version is worse.

Men think and feel and experience the world around them in certain ways. We experience things, see things, hear things, digest information, and come to what we consider to be very rational, very logical, very sensible, very correct conclusions.

When you think you’re right, everyone who doesn’t see things the same way must be wrong. Thus, your wife or girlfriend is “wrong” A LOT.

For example, despite loving our wives, forsaking all others, being willing to die for them, and spending every day trying to earn more money and respect and admiration for and from them, our wives often FEEL unloved.

Read: Women Who Remain Single For A Long Time End Up Being The Happiest

And because we don’t think it makes sense for them to feel unloved based on all the things I just listed—because we think it’s crazy, irrational and unreasonable—we pretty much ignore all suggestions to the contrary.

I am mocking and sarcastic. It is a brand of humour my friends and I have enjoyed for as long as I can remember. When I call my male friend a name or laugh at him about something, it is understood that he is my friend, he is loved and respected, and that by virtue of me wanting to be around him and wanting him to be part my social circle, that the comments and laughter are in fun and not mean-spirited.

My wife did not appreciate my mockery and sarcasm directed toward her. She was my wife and deserved a higher standard of treatment, she said.

I accidentally hurt her feelings a lot. I NEVER did it on purpose. So I always got pissed when she’d get mad at me over something I did unintentionally.

The “intent” argument only works for the first time.

If you’re out hunting and you fire a shot that accidentally kills someone in a nearby home you didn’t realize was there, you are unlikely to be charged with murder or homicide. Because it was an accident.

But if you go out hunting again to that same spot and accidentally kill a second person due to negligence? Have fun in prison.

Because I don’t respond to things the same way she does, I never really changed and expected her to adjust to my “correct” way of thinking and feeling and behaving.

Go ahead and keep that up guys and let me know how it works out for you.

She’s going to fall in love and have sex with someone else, and she’s probably going to tell him and her friends what a chump you are.

Red: What It REALLY Means When Your Man Looks At Other Women (Says a Man)

The Thing About Trust

I don’t like to sound like I know everything, because I don’t know anything about you or your life or what you think and feel.

But what I think I’ve learned is that when I feel and experience something, I can feel confident that MANY others have felt and experienced it too. Because we’re not so different, you and me.

I think most men think about trust in the context of infidelity.

I think one of the major hang-ups guys have about committing to a relationship or to marriage when they’re young is that by doing so, they’re effectively promising to never have sex with anyone else again. I don’t know whether men like variety or options or freedom or what, but that’s a big deal when we’re younger.

And that’s dangerous because a girlfriend isn’t that important and is reasonably easy to replace.