The Truth About Dealbreakers In Relationships 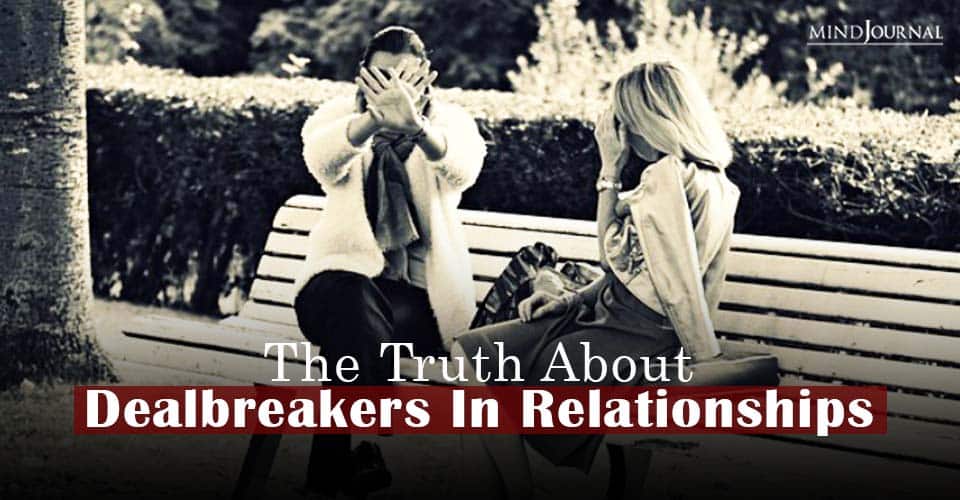 How much can you stand? One of the most frequently asked questions that we get from our readers and students is “What are the dealbreakers in relationships?”

“Dealbreakers” are those behaviors or conditions that one partner is unable or unwilling to tolerate in a relationship. Because “tolerance” is a relative term and subject to everyone’s unique capacity to accept varying degrees of distress or discomfort, there is no generic, one-size-fits-all answer to this question.

Because of this, there is no higher authority that we can defer to that legitimatizes our right to refuse to tolerate a specific practice or behavior on the part of our partner, or to sanction our right to continue behaviors that are unacceptable to him or her.

While one person may be willing or able to tolerate occasional affairs on the part of her husband, another may be unwilling to stay together with a single betrayal. The same goes for physical or verbal abuse, or addiction, or chronic dishonesty, or different religious beliefs, or any of a number of other conditions that may be present in a relationship.

This is not to say that either person is right or wrong in their behavior or in their degree of willingness to tolerate that behavior in another. It is also not to say that we shouldn’t make an effort to work out the inevitably different values that all couples have in regard to their beliefs, attitudes, and behaviors.

What can and often does push a situation from the workable zone to the unworkable zone is an unwillingness on the part of either partner to openly discuss her thoughts, feelings, concerns, experience, and needs. A willingness on the part of the “offending” partner to consider altering his beliefs or behaviors is required in order to create a deeper level of trust and respect in the relationship.

Related: 15 Green Flags In A Relationship That Proves Your Partner Is “The One”

If there is no motivation on the part of an alcoholic to modify his drinking habits, no desire on the part of an abuser to get help in altering his behavior, no willingness on the part of a parent to discuss her child-rearing philosophies openly and respectfully with his spouse, the chances of that situation being or becoming a dealbreaker are greatly increased.

In most cases, the possibility of resolution has less to do with behavior than the perception on the part of one or both partners that there are legitimate grounds to trust that there is a genuine intention to change or effectively manage the behavior or attitude that is causing distress in the relationship.

It is also important that the other partner is open to reflecting on ways in which she may be unknowingly contributing to the situation or to discovering ways in which she can be more effective in dealing with her concerns.

Yet even in cases where there is a willingness on the part of both partners to do their own work that may not necessarily be sufficient. It may not be enough to interrupt the pattern enough to bring about an outcome that restores equilibrium and mutual trust in the relationship.

The longer an unacceptable condition is allowed to continue in a relationship, the more likely it is to become toxic.

A toxic relationship is one in which the level of trust, respect, and goodwill has deteriorated to the point where even the desire and motivation to heal the partnership has been lost by one or both people. At this point, the likelihood of restoring this desire is very low and the prognosis for the relationship is poor.

There are serious risks that couples take in trying for too long to tolerate circumstances that are causing extreme suffering for one or both partners.