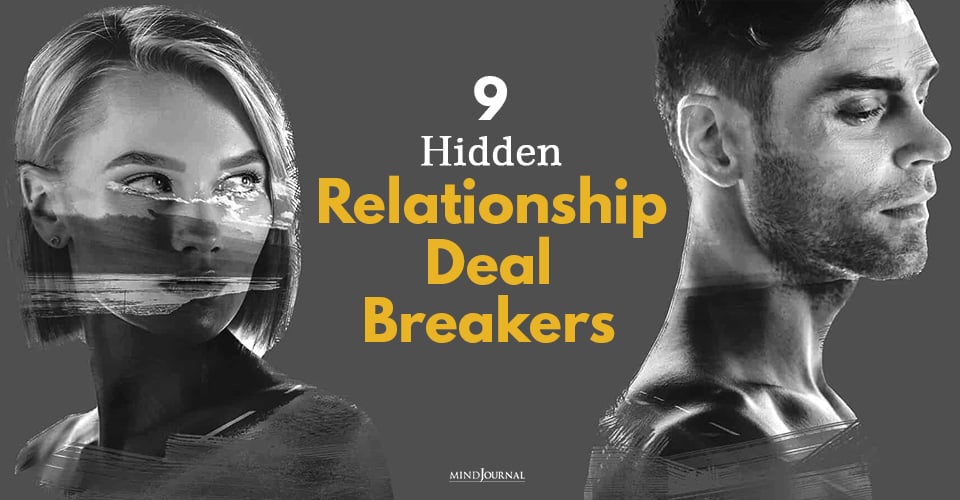 No matter how much you might love each other, and be committed to each other, there are some relationship deal breakers that can creep up on you with time, and threaten to destroy everything that you have built together.

The blush of new love can easily mask potential problems, many of which don’t emerge until a relationship matures. There is so much magic at the beginning of an intimate relationship that most people focus on those aspects, rather than any that could divert them from that joy.

New couples also tend to think that past relationship problems won’t resurface in their current relationship. Sadly, my experiences do not match their optimism.

When the blush of new love subsides, the issues that were potentially problematic from the beginning of any relationship are bound to arise, challenging and sometimes obliterating the wonderful connections that preempted them. If not resolved, they can become deal breakers, potential destroyers of the relationship.

As those less-than-desirable interactions mount, they can trigger negative thoughts, feelings, and behaviors. What might have once caused a mild reaction in either partner now becomes much more intense. Anger, resentment, and impatience begin to increase in frequency, last longer, are more intense, and take longer to heal.

Perhaps those slow, emotional leaks in their relationship love-boat could have been sealed while there was ample time to keep it afloat.

You’ll know that deal breakers are emerging if you are increasingly finding fault with one another in ways you haven’t before. Once these issues are identified, you may still be able to work through them in time to rescue and regenerate your love.

Here are 9 common examples of eventual deal breakers that are often denied or ignored in new relationships.

You may be able to recognize some of them that already exist in your current relationship.

In four decades of practicing therapy, I have never met a couple whose every desire was equaled by the other partner. Every intimate partnership faces the challenge of how to deal with those differences, especially as the relationship matures.

If those unequal appetites are crucial to either partner, there is bound to be strife as the couples struggle to keep them in balance. Over time, resentments and disappointments can mount if they dismiss their importance.

“I like to make love a lot, but without a lot of drama or worry in advance. My partner tells me that she needs a couple of days to warm up. When we finally do get there, it’s always good, but it’s happening less and less.”

“I need my friends. When we were first together, of course, I spent all my time and energy with him. But now he actually gets pissed at me when I want a night or a weekend with them. I just didn’t know that other people were not that important to him.”

“I keep wanting to put money away for our future, but she wants the kids to have every lesson available. I want them to have experiences, too, but we’re living paycheck to paycheck, and I’m getting tired of it.”

“I truly love his family, but come on, every Sunday night for dinner? I want time alone with him and fun with other people. He’s so scared of disappointing his mother. It’s beginning to really upset me.”

“We had so many plans for adventures when we were first together. Now it seems like we are getting to be a really boring, predictable couple. I don’t even want to dream anymore, because nothing changes.”

Related: The Truth About Dealbreakers In Relationships