Depression Triggers Of Each Zodiac: What Makes You Sad Based On Your Zodiac Sign 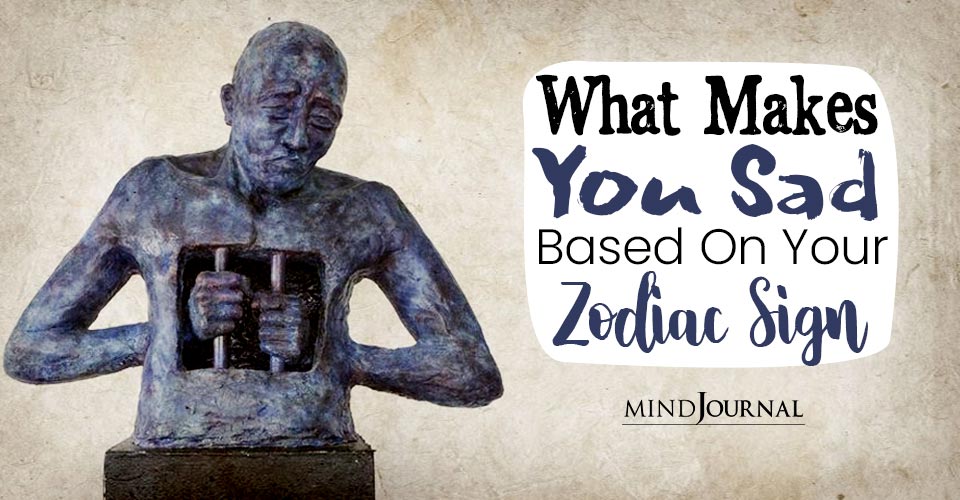 Are you aware of the triggers that send you down the rabbit hole? Learning about the depression triggers of each zodiac can help you manage your emotional health even better!

As much as we might want it to be, life isn’t all about sunshine and rainbows. It’s quite difficult at times and the sooner we realize this reality, the better. Knowing that life is hard leaves you better prepared to deal with it, otherwise, you’re just going to end up disappointed.

There’s no disputing that life is difficult but people’s feelings vastly differ. For example, having to stay alone might really affect one person but it might be another person’s dream weekend.

While all of us have different things that affect us deeply, our star signs can indicate what really depresses each one of us. The depression triggers of each zodiac show us how intricately our astrological placements are connected with our personalities. Though we aren’t all affected at the same level, every zodiac personality has triggers that can make them feel low.

So, what makes you sad based on your zodiac sign? Let’s take a look at your depression triggers according to astrology.

Here are the depression triggers of star signs:

According to the depression triggers of each zodiac, Aries lose it when things don’t work out the way they want them to. Aries feel a lot of sorrow and anguish when they lose control. As natural leaders, they like to take charge of all situations and when things slip out of their grip, they slip into sadness. And don’t worry, they’ll let you know in very clear terms when this happens.

Even though they do it to themselves, Taurus hates stagnating in one place more than anything. They have a tendency to find their comfort zone and dig themselves in deep there, even if they’re bored out of their minds half the time. However, they’re aware that they’re not progressing and it is a huge downer for them.

The depression trigger for a Gemini is a broken heart. Everyone becomes sad when they have their heartbroken but a Gemini will find it ten times more difficult to heal. The resentment they feel at being betrayed or misunderstood will stay with them for the rest of their lives. They’ll put on a brave show for the world but deep down they’re hurting.

Analyzing the depression triggers of each zodiac, you will find that Cancer is the most depressed of the zodiac signs. Coming in with a lot of body issues, Cancers are most upset when they aren’t their best selves.

It might seem trivial to others, but having it all together, matters a lot to Cancers and if they don’t live up to their own ideas, it can cause them to sink into sorrow. However, they vent out their feelings and this makes them bounce back quicker.

According to the depression triggers of each zodiac, Leos burns with the flame of a thousand suns or rather they try to. It hurts them deeply when people aren’t attentive to them.

If they think that someone is ignoring them, their mood will plummet in a matter of seconds. As they’re constantly seeking validation, they can’t handle it when they don’t get it.

As an extreme overthinker, Virgo tends to slip into depression just by going over whatever’s happening in their own life over and over and over again.

They’ll come up with all these fake situations in their own minds and all of them are destined to lead to the worst possible outcome. While they’re very good at predicting when something is about to go wrong, this also prevents them from enjoying the present.

Read 18 Things That Any Anxious Overthinker Will Understand

With high ideals, Libras feel the worst if they think there is something unfair or wrongdoing going on in any given situation. Even if the slightest of hitches occur in any of their well-weighed-out plans, they’ll completely freak out because there would a loss of balance in their perceived “perfect” scenario. This sensitivity leads to them sinking into the depths of despair.

According to the depression triggers of each zodiac, a Scorpio is never more depressed than when they are scared. They usually go through life without any fear, taking all the risks they can and enjoying the advantages of doing so.

But living by their own rules also makes them vulnerable. They risk upsetting their loved ones who sometimes feel hurt and leave Scorpios for good. This thought scares Scorpios and makes them depressed as well.

Loneliness is Sagittarius’ biggest trigger. Even though this is the sign that is most at ease when they are alone, the fear that they might never find the one who would understand them gnaws away at them.

They plan out their lives in solitude but they don’t like living that way for too long. They actually like being alone but only till they realize that loneliness might be waiting at the end of the road.

Going by the depression triggers of each zodiac, Capricorn is mortified by the thoughts of losing their prime. Knowing that they’re growing old is something that deeply upsets them. Somehow they can never wrap their heads around it being a part of life and they are always doing their best to avoid aging.

You’ll even find them going under the knife to maintain their looks but the knowledge that they’ve grown older always gets to them at some point leaving them down in the dumps.

There’s nothing more pleasing to an Aquarius than knowing that they’re right and they like keeping things that way. If you ever point out any mistake they might have made, they’ll be up many nights thinking up ways to show you how mistaken you are for even thinking that they could have messed up.

This constant struggle tears them down because they’re not really good at defensive measures. All the effort takes a toll leaving them to feel sad and cynical.

According to the depression triggers of each zodiac, Pisces is most often brought down by their family. It’s not really the fault of the family but Pisces just feels it more intensely when there is some strife among the members.

They like it when everyone gets along well and if it looks like the relationships within the family are tense, it makes them tense too. Being as high-strung as they are, they’re even more sensitive when it comes to family and this is usually the main reason why they’re upset.

So there you go. These are all the zodiac depression triggers. Let us know in the comments below, what makes you depressed based on your zodiac sign.