The Unmistakable Link Between Unhealed Trauma and Illness 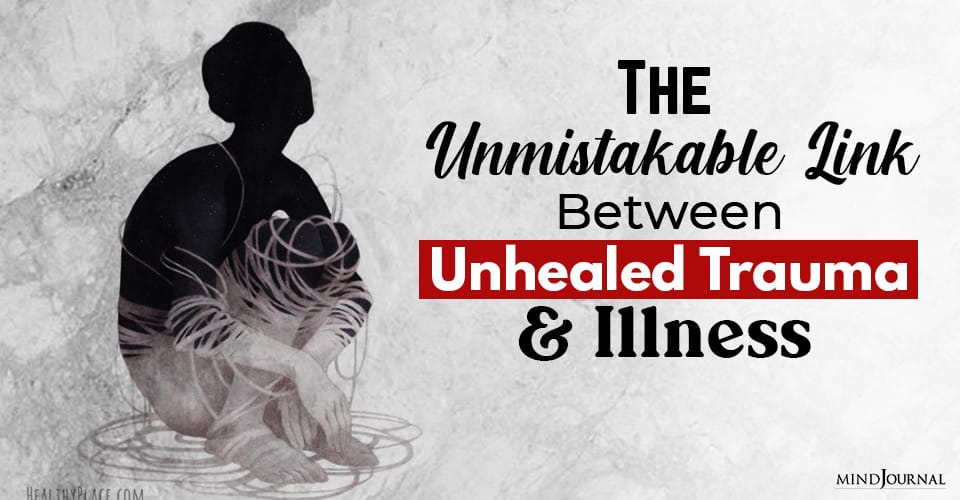 Most of us experience unhealed trauma at some level, not just war veterans who witness and experience horrific terror, but simply by growing up as vulnerable children in a world where many parents are themselves traumatized and can’t always hold that vulnerability safe for a child.

You might mistakenly think that you must experience incest, child abuse, parental abandonment, or living in a war zone in order to be traumatized, but trauma can be much more subtle.

Psychologist Dawson Church, PhD defines a traumatizing event as something that is:

In his book Psychological Trauma, Dawson gives the example of Martie’s traumatizing event, which could have lasting consequences but might be easily overlooked if you were not attuned to the kinds of events that can traumatize a child.

When I was growing up, I idolized my older brother Gary. But he was pretty rough with me. He was six years older than I was. One day when I was three and he was nine, he wanted to have a “wrestling match.” He “won” by lying on top of me. I couldn’t breathe and I began to panic. Gary just laughed when he saw me struggling. I almost passed out. When he rolled off me, I began to cry uncontrollably. My mother came in, and I tried to explain what happened. He told her it was nothing. I was just being a crybaby. Mom told me, “Big girls don’t cry.”

While it might be easily dismissed as just children tussling, this example meets all four criteria for a traumatizing event. Martie thought she was going to die when Gary lay on top of her, so she perceived a threat to her survival.

She tried to cope by pushing him off, but he was too big so her coping attempt failed and she felt powerless. Being smothered by her brother violated her expectation that her family would keep her safe.

When her mother failed to support and comfort her by dismissing her emotions with “Big girls don’t cry,” she was left feeling isolated and alone.

By this definition of trauma, almost all of us have experienced multiple traumatizing events in our lifetimes.

In my case, I had a fairly benevolent childhood, but 12 years of medical training caused me to experience multiple events that meet this criteria for trauma.

I also was held up at gunpoint by two masked gunmen in my twenties and had full on Post Traumatic Stress Disorder afterward.

Most recently, I was attacked by a pit bull and started having PTSD-like flashbacks right afterward.

Knowing what I know about the link between unresolved trauma and physical illness, I wanted to be proactive about healing the trauma right away.

I am lucky to have at my fingertips a variety of gifted and ethical healers who treat trauma. I reached out right away and asked for help. The flashbacks stopped and haven’t come back.

As I wrote about in Mind Over Medicine, there is a substantial amount of data linking mental health issues with physical disease.

This is not to suggest “it’s all in your head.” It’s absolutely in your body!

It’s simply that the physiological changes that occur in the body as the result of unhealed trauma and its associated stress, anxiety, and depression translates into conditions in the body that make you susceptible to physical ailments.

In a landmark 1990 study of 17,421 patients, Kaiser Permanente and the U.S. Centers for Disease Control (CDC) collaborated on the Adverse Childhood Experiences Study, which has resulted in over 50 peer-reviewed scientific articles.

Read 3 Lessons I Learned From Growing Out of Trauma

Patients were interviewed to determine whether they had experienced any of ten traumatizing events in childhood:

I'm passionate about working with people who want to live their best life now, let their brilliance shine, and get what they want. I was once tired of doing a job I no longer loved, juggling the demands of working and parenthood, overwhelmed, and stuck. I went through my own turning point where I discovered what I was truly meant to do, and I gave myself some compassion and time, and decided to design my life the way I wanted to, and courageously moved toward my dreams. (Of course, I hired my own coach, too, to help me get there faster!) I left my 23-year career in corporate Human Resources and I became a certified coach who gets to work with people more directly and see them realize their dreams, too. Fast forward a few years, and here I am doing work I love, finding more joy and success as a coach, facilitator, and writer, and empowered to make every day great. You can, too! I'll be there to bring you the awareness and clarity you need, help you create a plan to make it happen, and stand for you as you boldly make your vision a reality.View Author posts