3 Secrets To Living A Longer, Better And Happier Life 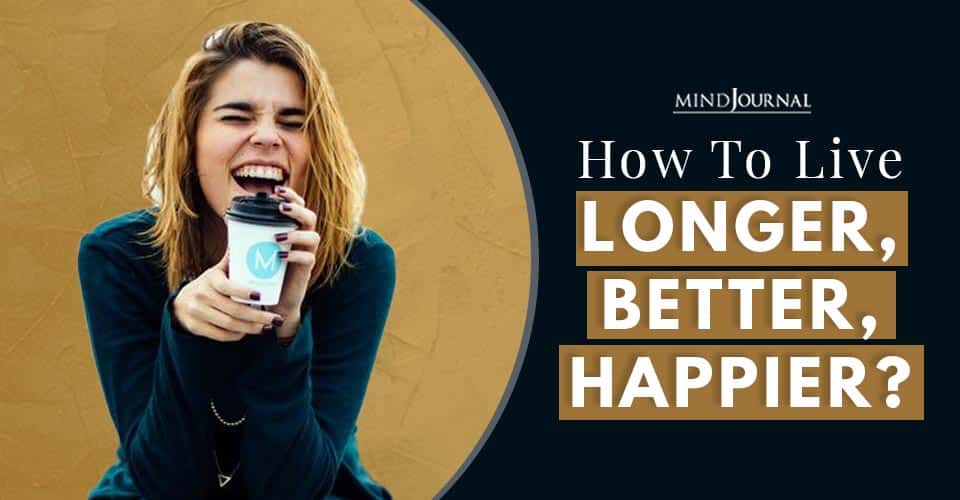 Secrets To Living A Longer, Better And Happier Life

Everyone wants to live a long life, but in order to live a longer and happier life, you need to know, understand, and implement the secrets to doing that.

But what is the “secret” recipe to a healthy longevity?

The secret to a happy, healthy, long life

Let’s take a look at some of the oldest populations around the world, so-called Blue Zones. These are regions around the world where people live much longer than the average person. The five regions are the Barbagia region of Sardinia, Ikaria, Greece, Nicoya Peninsula, Costa Rica, Seventh Day Adventists, Okinawa, Japan.

The people inhabiting Blue Zones share common lifestyle characteristics that contribute to their longevity. Residents of the Blue Zones live in different parts of the world. Yet they have 3 major commonalities that lead to a happier, healthier, longer life.

What do these cultures have in common?

All of these regions eat a mostly plant-based diet, have a sense of purpose in their community, and exercise naturally. No rigid workout, but gentle, moderate, and regular movement throughout the day like walking, farming, and fishing. They live a very similar lifestyle to our ancestors.

Humans evolved as a species that walks, runs, climbs trees and hills, and uses a variety of muscles all the time. Today, in most parts of the world, people use elevators and escalators instead of stairs, drive instead of walk, use dishwashers and washing machines instead of washing dishes and clothes by hand, buy food instead of growing it, and hire people to do even minor repair work around the house instead of fixing things ourselves.

Our society is just starting to realize that these behaviors will not be the optimal long-term solution for increasing mental and physical diseases.

Related: 5 Ways To Stop Taking Your Life for Granted and Boost Your Mood

This is what 100-year-olds in the blue zones eat: Beans, including chickpeas, black beans, soy, and lentils. These staples are the cornerstone of most centenarian diets. Meat is eaten on average only five times per month.

Research shows that the longest-lived are getting 95 percent of their calories from plants and only 5 percent from animal products. About 65 percent of their diet is whole grains, beans, and starchy tubers. Yep, they are not afraid of carbs! No matter where you go, the snack of choice is nuts. People who eat nuts live two to three years longer than non-nut eaters. Amazing, huh?

What is more, coffee is a daily ritual in blue zones areas, as well (Yay!). In all five original blue zones areas, people drink up to two or three cups of black coffee per day! Sardinians, Ikarians, and Nicoyans start their days with a cup, lightly sweetened without cream.

The world’s longest-lived people don’t go to the gym to pump iron, run marathons, or sports clubs. Instead, they live in environments that constantly nudge them into moving without thinking about it.

Nila is a holistic Psychologist, Yoga teacher, and certified (plant-based) nutritionist from Germany. Her unique approach blends the latest science in psychology, nutrition, and eastern mindfulness practices to promote holistic wellbeing. Nila is passionate about encouraging people look within to cultivate a more compassionate, healing and nourishing connection to themselves and ultimately find the truth of who they are - perfectly whole in all their imperfection.View Author posts