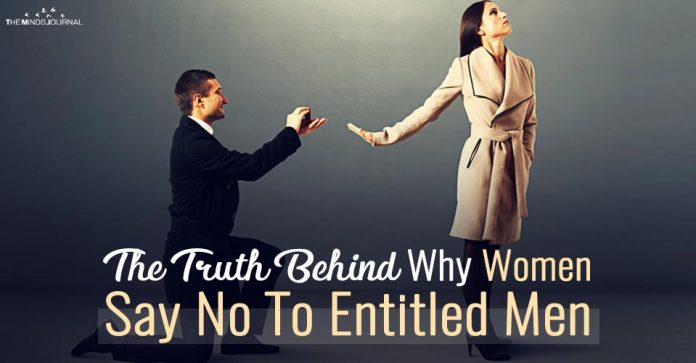 Schadenfreude: The Truth Behind Why Women Say No To Entitled Men

‘Schadenfreude’ : Why are we pleased by others’ romantic misfortunes?

Why do women like to say “no” to attract people? Do we feel good when others feel bad?

My focus here is not on the (many) reasons that might justify saying “no” to men, but rather on why (some) women are happy to do so.

Pleasure at the misfortune of others (schadenfreude)

“It is not enough to succeed; others must fail.” —Gore Vidal

“In the misfortunes of our best friends we always find something which is not displeasing to us.” —Francois de La Rochefoucauld

Schadenfreude (the German term for feeling pleasure from others’ misfortune) has two obvious parts: our pleasure and someone else’s misfortune. These features express the centrality of the personal comparative concern in schadenfreude: the other’s misfortune somehow improves our situation.

In calculating our position, the misfortune of others appears on the credit side. In this sense, schadenfreude is close to envy: in both, the comparison of our fortune with that of another person is crucial. However, contrary to envy, in schadenfreude, we occupy the superior position.

Our personal gain while experiencing schadenfreude is mainly a brief psychological-comparative one. And it is a kind of symbolic and sometimes even illusory gain, as it does not really change our situation. Consider the following case: Oliver divorces Olivia and marries Charlotte, who, after a while, leaves him. Olivia may be pleased about this, but her benefit is not much more than a momentary, superficial boost to her ego.

I have suggested that a typical schadenfreude has three additional characteristics:

(a) the other person is perceived to deserve the misfortune,

(b) the misfortune is relatively minor, and

My focus here is on the issue of deservingness, which is central in many emotions, including schadenfreude and romantic love.

“I like to say no to men, especially the entitled ones who are seldom rejected. I know I’m not hurting them, but I’m sure they wonder why I don’t pursue their chase.” —A married woman

In my recent book, The Arc of Love: How Our Romantic Lives Change Over Time, I argue that as the romantic realm is a major part of our lives, most emotions show up to visit there at one time or another. The guest list contains “negative” emotions, such as envy, jealousy, hate, disgust, and schadenfreude, and the more frequent visitors are “positive” ones, such as sexual desire, admiration, attraction, and happiness. While, in general, partners should mostly be selecting from part two of the list, in cases of inequalities between the lovers, or in those in which love is not profound, envy and schadenfreude are likely to be present. In such circumstances, love is not the only player in town.

In schadenfreude, one believes that the other person deserves his or her misfortune.

The Australian psychologist Norman Feather (2004) demonstrated the centrality of this belief in schadenfreude. He showed that people are happier about the fall of apparently successful people, such as politicians or high-profile celebrities, than other people—and that this pleasure is best explained by the belief that such individuals deserve such misfortune, thereby being somewhat similar to the rest of us.

The married woman cited above further explains her pleasure in saying “no” to entitled men, by referring to the issue of deservingness:

“I love to watch the entitled man’s plumage as he demonstrates his prowess over me. The thought occurs inside my pretty head that he has performed this dance many times before. I have trained myself to understand the nature of peacocking and not to personalize the demonstration. I know it has been performed for many women in his past and not to flatter myself that it is unique for me. This makes the performance truly entertaining, as I secretly smile behind my sincere eyes, that the expected outcome has a surprise ending…I will say ‘No’ to this man. As much as I appreciate the show of feathers, there’s a hidden joy knowing I will turn the mighty peacock away, realizing it was never about me, but more about his collection of many a slain maiden left behind.”

The attitude of this married woman toward peacocking men shows why they deserve to be rejected—her pleasure is associated with the sense that justice has been done. Schadenfreude, then, may not be as immoral as we might think.

Aaron Ben-Zeév
Aaron Ben-Ze’ev is a Professor of Philosophy at the University of Haifa. He received his Ph.D. is from the University of Chicago (1981). Professor Ben-Ze'ev is considered one of the world's leading experts in the study of emotions and romantic love. Among his books are The Subtlety of Emotions (MIT, 2000), Love Online (Cambridge UP, 2004), In The Name of Love (with Goussinsky, Oxford UP, 2008); The Arc of Love: How Our Romantic Lives Change Over Time (University of Chicago Press, 2019). He has a popular blog in Psychology Today, on Romantic Love, which enjoys about one million viewers per 90 days. At the University of Haifa, he was President (2004-2012), Rector (2000-2004), Dean of Research (1995-2000), and Chairperson of the Philosophy Department (1986-1988). He is the Founding and former President of the European Philosophical Society for the Study of Emotions.
-Adverts-

Women don’t want a “Nice Guy”. They may say they do, but what they really mean is that they want a GOOD guy. Here's the difference:
Read more
Dating

How To Deal With A Stuck-Up Woman

You know the kind. She kind of looks at you raises an eyebrow and says something really obnoxious
Read more
Interesting

Top 9 Important Things You Should Know About Liars

Being able to understand when, why, and how people lie helps you establish more honest relationships and prevent disasters from happening due to being falsely informed.
Read more
wpDiscuz
0
0
Would love your thoughts, please comment.x
()
x
| Reply