Why Phone Calls Are Better Than Texting Reveals New Study 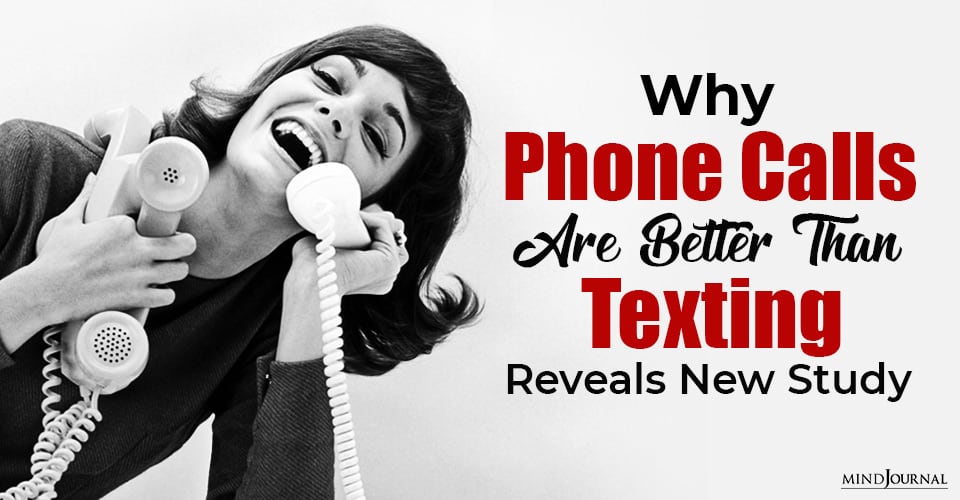 A new study suggests that we undervalue the bonding and enjoyment we get from hearing someone’s voice. Phone calls are better than texting as there is something about the voice, in particular, that increases intimacy.

Like most people, I’ve been doing a lot of texting with friends and family lately. COVID-19 (and the physical separation it necessitates) has made socializing in person very limited, which means I’ve had to work harder than ever to keep my relationships strong and healthy.

But a new study suggests that if that’s my aim, texting may not be enough. To stay close at a time when we all need companionship and support, we’d be better off making phone calls or setting up a video call—doing something where we can actually hear another person’s voice.

In the study, participants imagined having a conversation with a friend they hadn’t been in touch with for at least two years. They predicted how awkward or enjoyable it would be and how close they’d feel if they connected by phone calls versus email. They also said which medium they’d prefer to use.

Then, participants were randomly assigned to connect with their old friends via phone calls or email and to report back on the experience. Though most people anticipated talking by phone would be more uncomfortable for them, those who spoke on the phone were happier with the exchange, felt closer to the other person, and felt no more uncomfortable than those who’d emailed—even if they’d said they preferred to email, not call.

“We think it’s going to be awkward to talk to somebody, but that just turns out not to be the case,” says lead author Amit Kumar. “Instead . . . people form significantly stronger bonds when they’re talking on the phone than when communicating over email.”

This finding also held true for people conversing with someone they didn’t know at all, according to another part of the study.

Participants were told they’d be using voice chat, video chat, or text chat to get to know a stranger. As in the previous experiment, they were asked to predict what the experience would be like and how close they might become to the person. Then, they were paired with a stranger to do a “fast friends” exercise, asking and answering a series of increasingly personal questions, like “What would constitute the ‘perfect’ day for you?” and “What is one of the more embarrassing moments in your life?”

Even though video chatting might seem better than audio alone (because people could see each other’s faces), it didn’t seem to matter—the two methods had similar results.

The power of the voice

These experiments suggest there’s something about the voice, in particular, that increases intimacy.

“There are linguistic cues that come through someone’s voice that suggest a feeling and thinking mind,” says Kumar. “And since connecting with somebody means getting a little closer to their mind, voice-based communication makes that easier or more likely.”

He points to other research that also emphasizes the importance of voice in our communication. For example, people asked to evaluate a potential job applicant found the applicant to be more thoughtful, intelligent, and competent if they’d heard rather than read the person’s job pitch. Similar to Kumar’s study, adding a video to the pitch was no more impactful than hearing the pitch without one.

In another study, people who listened to someone express a political viewpoint that they disagreed with were less likely to dehumanize that person than people who simply read the transcript of their argument. This suggests that talking to people from different political parties (rather than texting or responding to them on Facebook) might help bridge divides.

Jill Suttie, Psy.D., is a staff writer and contributing editor for Greater Good. Her articles cover the science and practice of positive human emotion and behavior, impacts of racial bias, technology, nature, music, and social policy on individual mental health, relationships, and society. Outside of working for Greater Good, she does freelance writing for other publications, has been a featured guest on podcasts, and is a musician with two CD's of original songs, both available on her personal website: jillsuttie.com. She received her doctorate at the University of San Francisco and worked in private practice as a psychologist prior to coming to Greater Good.View Author posts