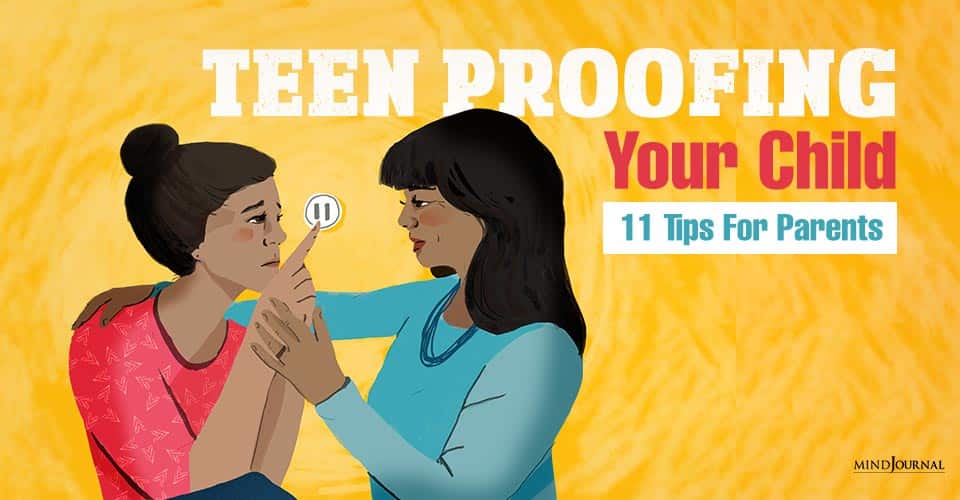 The mother sitting in front of me was in tears. She looked thoroughly defeated, but more than that, she was worried. Her husband, sitting next to her, sighed deeply and shook his head in anger. “We’ve been through this a million times. It’s like hitting your head against granite… and I’m just about done.”

Sitting across from them was their 16-year-old daughter Rachel. Her expression was one of contempt mixed with boredom. She sat slouched in an overstuffed office chair, arms folded across her chest, a thousand-mile stare directed out the window.

Before entering high school Rachel had been an easygoing youngster who seemed to bounce through each day as though she hadn’t a care in the world. Her parents described her as having been “a bright, happy, and outgoing” girl.

Sometime in the middle of her freshman year, however, they noticed a change in their daughter. Their easygoing daughter began to sulk when asked to do chores, and the little arguments around inconsequential topics became more frequent. Shortly after this, the school began to call letting the parents know that Rachel had skipped a class, or had been found leaving the high school campus with a group of other teens.

Around this same time, Rachel’s mood became even more irritable. She withdrew frequently, spending hours behind a closed bedroom door. Getting her to talk at the dinner table had never been an issue in the past. Now the parents felt lucky if their daughter spoke up at all.

As the semester wore on, it became clear that what their daughter wanted most was to be left alone – unless she needed to be driven somewhere, in which case the agreeable and sweet side of Rachel from times gone by suddenly reappeared.

The parents responded to these changes by telling their daughter how disappointed they were in her choices. When this did not have the desired impact they would shift to stern reprimands and punishment. Confrontation and tense exchanges started to punctuate each week.

Rachel’s behavior always showed brief improvement after one of these heated conflicts, but over time she learned to simply agree with whatever her parents said, and then immediately ignored all of their warnings.

Her mother and father unwittingly developed a routine. Each evening before going to bed the conversation would turn to the topic of Rachel’s most recent act of defiance. Back and forth they tossed ideas, expressed their worry, spoke of their anger, and wondered what had gone so wrong. The home that two years before had been filled with laughter and a sense of intimacy was now an emotional war zone.

Anger and conflict had replaced the warmth and sense of oneness they had previously enjoyed. Rachel’s parents were confused. How could such a sweet girl transform into one who was so resentful and rebellious? How could their family life so quickly shift from being a haven of support to a crucible of conflict?

The ‘last straw’ occurred when the parents returned home early from a ‘date night’ and found that Rachel had invited a boy into the house for a date night of her own. Feeling desperate, the parents decided to call a therapist.

The story of Rachel is a familiar one:

A rebellious adolescent whose misbehavior creates years of emotional turmoil within a family. There are, however, ways of making this outcome less likely. Of putting the odds for happy adolescence in your favor.

This is no different from any other aspect of life. If you are preparing to run in a marathon, your training will focus on endurance running. On the other hand, if you are preparing to compete in a chess tournament your training will involve studying common chessboard strategy, and improving your ability to think three or four moves ahead in the game. Running several miles each day in order to prepare for a chess match…. Well, not too helpful.

So what challenges do teens face? To get a clear answer to this question we need to realize that this period of time is the “launchpad” to adulthood. The youngster who recently enjoyed playing with Legos or dolls is now immersed in the business of preparing for adulthood.

The teen’s job during these years is to:

There is no other time in an individual’s life where so many changes are required of an individual in such a short period of time. In case things are not already dicey enough, added to all of this are the following:

This begins to sound like a wizard’s brew designed to drive both teens and parents to the limits of crazy land. The good news. It doesn’t have to go down that road!

What Teens Need To Successfully Navigate The Adolescent Years

To travel through adolescence and succeed, to traverse these years and remain close to parents and experience minimal drama, a few basic skills must be firmly developed ahead of time.

These skills, or aptitudes, include the ability to avoid falling into the following traps:

When the skills needed to avoid these pitfalls are taught from an early age, they are more likely to become deeply rooted in a child’s character. They become second nature. This makes it easier to resist the pressures mentioned above that every teen faces.

Related: Mindful Parenting: How to Raise Kind and Conscious Teens

How To Prepare For Adolescence

What can you do to help your child be ready for the challenges that lie ahead? Several things. Some are easy, others are more challenging, but none of them require superhuman skills. Here is a brief list.

Yes, I know, you’ve heard it before – but let it sink in. All of us parents know we need to do this, and all of us hate letting our children fail.

Even so, we know deep down that setbacks in life are inevitable. They are something each of us faces from time to time. Learning to experience failure, and have it neither define nor defeat you, is how one grows stronger. It is an essential skill for living a successful life.

2. Be supportive but not enabling.

When your child has fallen short in some way, it is helpful to provide support and perspective. When life has dealt them a cruel hand in some way, be the shoulder they can lean on, but don’t treat them as a victim.

Do this by reflecting confidence in their ability to bounce back, to overcome. Help them realize that they may be victimized by fate, or mistreated by friends they had trusted, but help them never lose sight that they are capable of overcoming those heartaches. Those that overcome hardships are victors, not victims.

Related: Why Are Teens So Lonely and 7 Things They Can Do To Combat Loneliness

3. Show your child that you have confidence in him/her.

Confidence is learned. Children learn confidence by seeing it reflected in their parents’ appraisal. (That is one of the reasons for letting children try and fail – it reflects confidence in the child’s ability to persist and eventually win the goal at which he or she had taken aim). Confidence is also learned through experience. Steer your child toward activities within which he or she can excel.

4. Put setbacks in perspective, they are not the end of the world.

When comforting your child in response to some setback in life, provide some perspective. This is not to say you should minimize the distress your child feels, but the events surrounding that hurt need to be realistically viewed. So you end up doing two things at once: comforting your child, and conveying the message “Toughen Up Buttercup.”

5. Place more emphasis on character than accomplishments (the effort put into getting a good grade is much more important than the grade itself).

Character trumps ability. Without character, ability is a hallow thing. A ship without a rudder. Your child’s persistence and effort are more important than the final outcome. The youngster who is naturally gifted and earns straight A’s, but puts forth little effort, is much less ready for adulthood than the child who earns straight B’s by putting forth consistent effort.

6. Build a relationship that welcomes your child’s ideas, even when those ideas conflict with your own.

Speak with interest and genuine regard about your child’s ideas, even if they appear foolish. You need not pretend that they are accurate. You should, however, try your best to help your child understand that you welcome the opportunity to understand his or her perspective. In this way, when your youngster is a teen, he or she is likely to feel more comfortable openly discussing various topics with you.

7. Teach your child how to choose friends wisely.

When children are young parents do best by helping them to choose their friends. These relationships will teach your child what to expect from peers as they grow older. They will also help to shape your child’s preference for the type of friendships formed later in life. When they are in their teens, these foundational friendships will act as guardrails to keep them on track. Badly chosen friendships will act as seductive invitations to behave in ways that have long-term consequences.

Related: 6 Ways Parents Can Communicate With Their Teenagers Better (According To Teens)

8. Teach your child that it is better to follow his/her judgement/moral compass than it is to win the approval of others.

Celebrate every instance of your child following his/her conscience. When faced with the enormous peer pressures of the adolescent crowd, conscience will be the ultimate bulwark against regrettable decisions. Spend time building that bulwark to be as strong as possible.

Performing household chores, not allowing temper tantrums in older children, developing good manners, sticking to routines even when it is difficult, are all ways in which children learn self-control. When confronted with the explosive cocktail of adolescent stress and hormones, self-control is a stalwart friend.

10. Emphasize respect for authority even while emphasizing independent thinking skills.

Children who respect authority figures develop a stronger sense of confidence than those who constantly rebel. They have fewer problems at home and in school. Life is sweeter.

Nevertheless, there needs to be a balance. Your child needs to learn to think independently. To understand that authority figures can be respected, and still be mistaken. This is a process. A gradual process.

By helping your child acquire this perspective the teen years will be relatively free from the unnecessary travails that arise when an adolescent feels obligated to rebel against authority figures.

11. Teach your child to be grateful.

Gratitude provides perspective, instills a sense of connectedness to others (those to whom we are grateful), and encourages generosity. Children who learn gratitude are happier, and this acts as a barrier to the discontent that afflicts many teens.

The teen years can be a wonderful time of growth or a tumultuous period of stress for the adolescent and his/her family. To make the most of these years requires preparation. Specific skills need to be developed that prepare the teen to meet the challenges that will inevitably be faced.

Parents who, early on, begin to develop these skills in their children are much more likely to have teens that emerge from adolescence ready to take their place within the world of adults.

Related: Depressed And Anxious Teens: Experts Give Practical Advice On How To Help (Including Checklists)

You can do this… Start now.

previousWhat Are You Subconsciously Afraid Of? QUIZ
nextDisordered Leaders: Why Are Psychopaths And Narcissists Drawn To Positions Of Power?