20 Identifying Traits Of A Paranoid Personality in Relationships 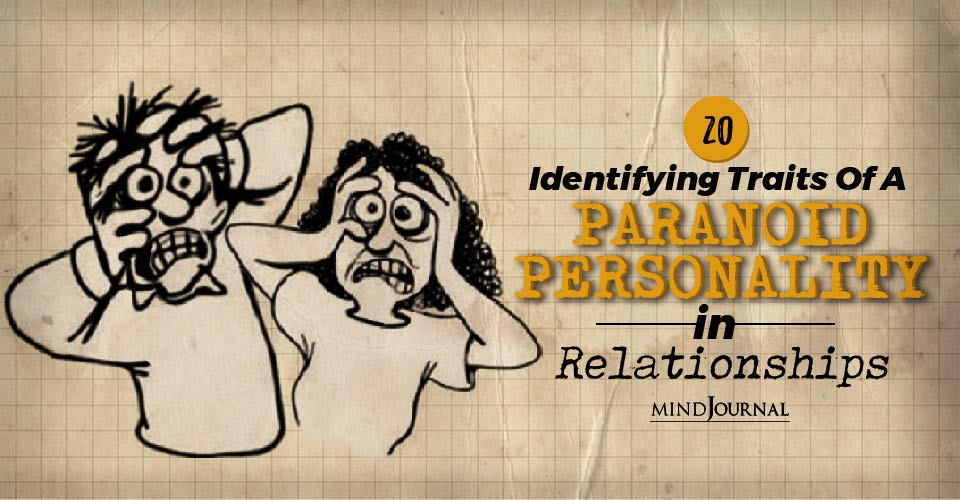 People with paranoid personality disorder happen to suffer from acute distrust. Their unjustified suspicion and hesitancy to confide in others adversely affects their decision-making ability and relationships. Being in a relationship with a paranoid partner can lead to feeling emotionally drained and way more nervous and anxious.

After writing about eggshell relationships a few weeks back, I received an email from a woman I will call Sara. She had also read my book Dangerous Personalities and wondered why there were so many articles about narcissists, psychopaths, and borderline personalities, but very little written about being in a relationship with someone who is paranoid.

I couldn’t answer the why question, but she was right about the lack of written material written about those kinds of relationships. She had been in one for three years and she described the turmoil and unhappiness she endured but she wished “someone had warned me.”

The paranoid personality, in my experience, is often not talked about because it is often mistaken for other personality types or it is outright ignored as just being some form “eccentricity.” Even when I tell people to go back and see the 1999 movie American Beauty and examine closely Frank Fitts dealing with his wife and son, they struggle to understand that Fitts, in that movie, is a paranoid personality.

And that hell Mrs. Fitts was living, that left her silent, downcast, and emotionally dead, is because of him. But that is a movie and life is rarely that neatly packaged. Character disorders, after all, are on a continuum; some are more acute or pathological than others.

What stands out about the paranoid personality in relationships are the behaviors and how they make others feel. Over the years of researching my book, I collected the words that describe the paranoid personality based on what was reported by those who had lived with them or had been victimized by them. There is wisdom in their unfiltered words—the words of those who have lived it in vivo.

Here are some of the words, not all, that they used to describe this personality type from their experiences:

When we hear these terms, it should make us take note. Do I know someone like this? Does this sound like my boyfriend or spouse? Have I sensed and felt this myself?

Words alone may not mean a lot, but in the aggregate, they give shape and form to help us understand something is wrong with the individual they describe—individuals who are, as Stuart Yudofsky, M.D., said, “flawed of character” (Yudoffsky 2005, 312-327).

When Sara started dating this man, she noticed some of the characteristics in the word list above but she either dismissed them, thought they would go away, or did not think they would affect her. She was wrong.

She didn’t know that the paranoid personality is stubborn; there is no pill you can take for it, and that those who live with someone who is paranoid pay a price—usually a high emotional price.

Unfortunately, most people don’t know what to look for. But what if someone had sat down with Sara and said, look for these behaviors, examine how being around this person makes you feel? While it is too late for Sara, who has already lived this, it is not for the rest of us.

Behavioral Traits Of A Paranoid Personality

Consider the aforementioned words from the victims and examine these 20 behavioral traits that are often associated with the paranoid personality:

1. Is seemingly always distrustful or suspicious without need.

2. Is highly moralistic and judgmental.

3. Habitually questions the intentions of others, including spouse, intimate relations, family, or workmates.

4. Is guarded, secretive, devious, scheming, or thinks others around him are that way.

5. Is unbending in thoughts and ideas—stubbornly holds onto beliefs with rigid thinking.

6. Holds grudges for a long time and is not forgiving of slights, even after many years.

7. Is a chronic complainer and malcontent—never satisfied everything is above board or assumes something nefarious is at play.

Related: The 3 Types of Complainers You Should Stay Away From