He Never Hit Me 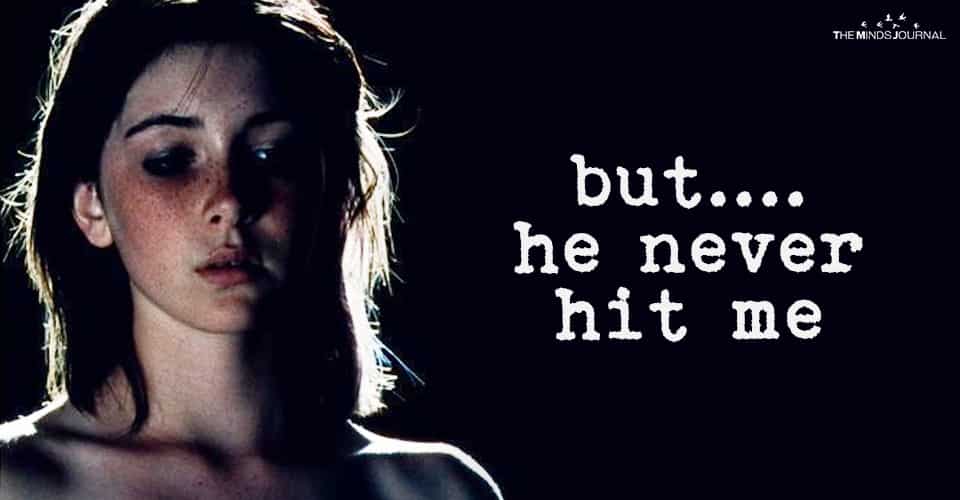 He Never Hit Me…

Warning: This post contains descriptions of intimate partner abuse and may be triggering to some.

How many times did I find myself on his bathroom floor cowering beneath him, feeling the hot spit land on me as he screamed? Stop crying like a baby. You’re crazy. No one else would put up with you.

How many times did I shudder on that floor counting my breaths, bringing myself back from the brink of suffocation during a panic attack that was triggered by one of these maniacal and regular assaults?

How many hours did I remain on that bathroom floor after he had gone to bed, my eyes red with burst blood vessels? How many times did I hear the sound of his snores and realize he had fallen asleep, no more than a meter away, to the sound of me hyperventilating while still in the throes of that panic attack?

There are many reasons why victims of intimate partner abuse don’t leave. Watch out what Leslie Morgan Steiner says about breaking the silence

How many times did I crawl into that bed, rather than into a cab, and wake up with his arms around me, telling me that I brought it out in him? He wasn’t like this. I made him like this.

I needed to change the way I approached him about these things. Be less accusatory. If I just softened my approach, it would allow him to react differently.

How many times did I adjust my approach before I realized the only way to avoid the abuse was not to bring it up at all?

Are you worried about emotional abuse? Here’s How To Know if You are Being Abused

How many emails and text messages did I find? How many parties did we attend knowing that one of the women was there? I learned quickly not to address it so that “I” wouldn’t ruin a perfectly nice evening.

When his family member asked me if a lipstick she had found under the couch was mine, I threw it away and said nothing more of it. Neither did she. Another humiliation has taken in silence.

Related article – How Abusive Relationships Trap us Into Not Leaving

I could see how much he enjoyed being that powerful. How many defamatory lies did he concoct and propagate to my old colleagues and friends when I walked away from him?

How many times did a friend pick me up because he had kicked me out of bed in the middle of the night for questioning him about one of the women? How many times did I go back before those friends had had enough?

How many times did I defend him and justify his behavior when I told a friend about what he had done? When did I stop telling anyone altogether to avoid the shame of the insanity of the circumstances I was somehow in — the shame of being a strong independent woman who couldn’t take care of herself enough to leave a situation that was so toxic? When did I stop expecting more?

How could I explain to someone that I believed it was partly my fault, even though I was embarrassed to hear those beaten woman’s words spoken from my lips.

No one really understood. No one knew him like I did. It was my job to protect him from the truth of what he did to me. I couldn’t let them think he was a monster. I wouldn’t tell anyone. I was entirely alone. But he never hit me.

I let him define reality. I became isolated. It became easier to cut off my support networks completely than to have to lie about everything. Than to face the humiliation of my reality. A part of me knew that once they knew the extent of what was happening, they would force me to get out for good. I wouldn’t be able to go back. I knew I would always need to even in the worst of times. But he never hit me.

I set a benchmark. The red line I wouldn’t cross. The minute he hit me, I would leave. But the truth is, I know I wouldn’t have left then either.

I would have rationalized that in hitting me, he would realize how out of hand things were. Everything would change now. I wouldn’t have left. By hurting me, he showed me he loved me. He cared enough to go that crazy. He cared so much that he was overwhelmed by anger or jealousy or sadness and simply couldn’t control himself.

How can you explain to someone that the abuse was only a part of who he was? How do you explain that to yourself?

There are still days when I remember tender moments and wonder if it really was that bad. I still struggle with reconciling how he could love me to the point of tears and yet hurt me as if I was an enemy.

Like a child, I’m learning to redefine the borders of normal behavior and to realign my expectations. I remind myself that acts of violence can never be acts of love.

For the first time, I see my own reflection in other women who have emerged from the depths of such darkness. Indescribably courageous women whom I have never met, but who have shared their stories and in doing so, saved me.

These women embraced me with their pain and unknowingly convinced me that I was not alone, that I am worthy of more. I hadn’t believed that singular truth in a very long time.

Knowing that others were there has allowed the shame to dissipate. I used to default to the trained belief that I was crazy, overly sensitive or had imagined it all because I could not reconcile the love and the abuse. I have permitted myself to accept that both existed.

Their stories have allowed me to forgive myself. To recognize how arbitrary that red line was. Seeing myself in their eyes has allowed me to name my abuser. To name my experience as an abused woman. And then to let go.

I pray now that my words will travel to the broken woman staring back at them and embrace her. I hope they equip her with the strength and love she needs to raise herself from the depths.

3 thoughts on “He Never Hit Me”