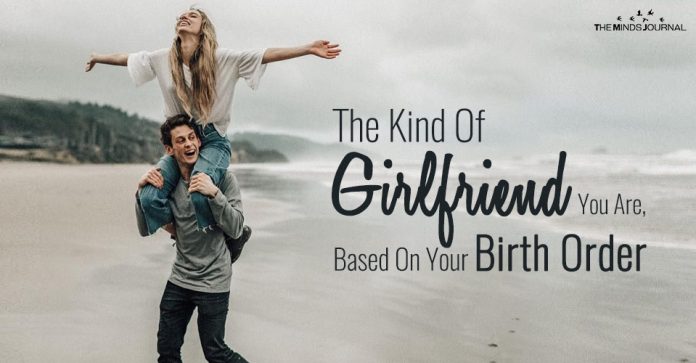 The Kind Of Girlfriend You Are, Based On Your Birth Order

The Kind Of Girlfriend You Are, Based On Your Birth Order

Surprising Ways Your Birth Order Impacts The Kind of Girlfriend You Are.

Our birth order has a huge impact on our character formation, the circumstances in which we are raised, our siblings – everything affects us while growing up.  The impact of all this stays with us forever and affects us and our future relationships. 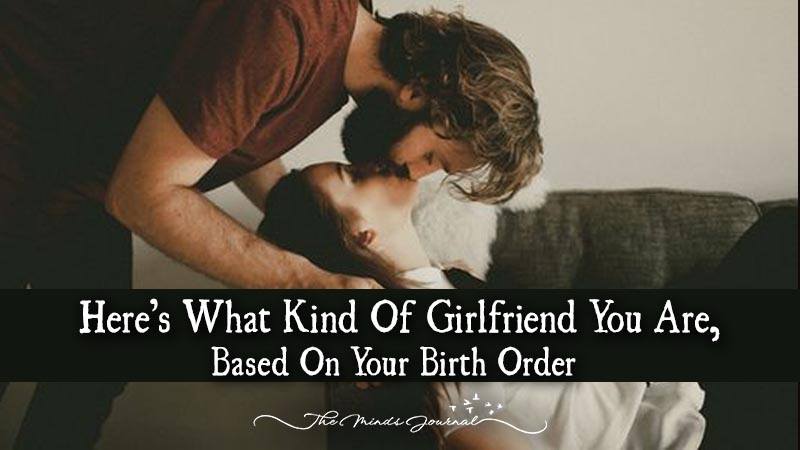 Girls who are the oldest in their family are the girlfriends who just want to take care of you. Their maternal instinct can never be tamed so they always want to make sure you’re in a good spot, have enough to eat, don’t need help with anything…pretty much anything that could fall under the caretaker role. They are the classic, “text me when you get home!” girlfriend — the one is who always going to put you ahead of herself.

Oldest children do have a reputation for being controlling, and so the girl who is the oldest sibling is probably going to be on the more type A end of the spectrum. Think of it as less bossy, and more particular. Will there be arguments because the laundry wasn’t put away correctly? Maybe. But the benefit to being an oldest child is she’s learned how to negotiate. So arguments very quickly become “dialogues” or “discussions” and rarely spin out of control and become an actual fight.

SOMEWHERE IN THE MIDDLE

Middle children have grown up with people on either side of them who were also vying for attention, so dating a middle child means she’s going to want a lot of reassurance. She has a tendency to lean a little towards the jealousy side — not because she’s paranoid or thinks her S.O. is doing anything that would WARRANT jealousy. Her jealousy mostly stems from wanting to be the center of attention (for a change) and be someone’s number one.

Because of her inclination to attention seek, the middle child girlfriend is absolutely a people pleaser. She always wants to make her partner happy — to make sure what’s being said about her is really positive and affirms her place as their favorite. She wants to be the person who randomly comes to mind and makes whoever is thinking of her smile. That is a best case scenario for a middle child.

Babies are the family favorite, and they’re used to being treated as such. Often they’re kind of spoiled and used to being…well…babied. A girl who is the youngest in her family is probably going to be a pretty high-maintenance girlfriend. Youngest children have grown accustomed to a certain level of cushiness to their lifestyle and it’s not one that they’ll very easily give up. They’re the girlfriends who will ask you take out the trash because their nails are wet, or change the channel because they don’t want to get up.

But you’ll never have as much fun with a girlfriend as you will with a youngest child. That youthful energy never quite leaves them and they’ll always be down for something fun and adventurous. A girlfriend who’s the youngest will bring out your inner child like no one else can.

You know that saying, “I’m with my best friend,” that people say about their significant other? That will realistically never apply with a twin. Twins are best friends and have a bond that cannot be replicated or even understood by someone who is NOT a twin. So a girl who is a twin has to find a relationship that’s different with her partner, but equally as special. Sometimes she will unintentionally make her S.O. feel like they’re in the shadow of something they have no way of competing with. So it’s definitely a challenge she has to master to not end up being a girlfriend who doesn’t give enough love and attention to her partner.

Once you take a closer look at the personality traits of Aquarius, you will see how different, unique, and special they truly are.
Read more
wpDiscuz
6
0
Would love your thoughts, please comment.x
()
x
| Reply