15 Things You Can Do When Co-Parenting With A Psychopath 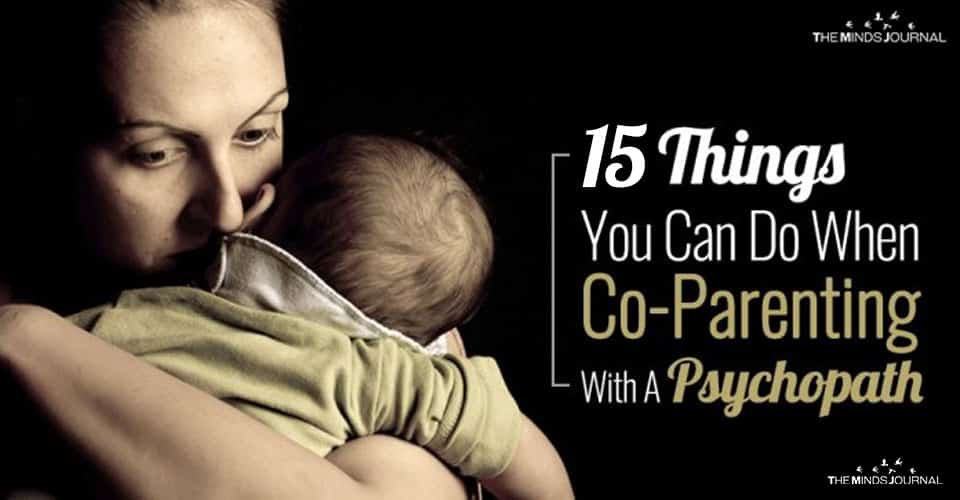 Sociopath, psychopath…they are both similar in regards to the mental state of the individual in question. Either way, dealing with one or the other is truly a special kind of hell.

Sadly, we live in a world made up of many ‘split’ families. Parents are either separated, divorced or in extreme cases, one parent simply moves on and forgets they ever had a child.

As the responsible parent, how do you deal with this? Well, you fight through it, stay true to your child/children and always put them first.

Signs You’re Co-parenting with a psychopath

Here are some signs that may help you distinguish whether or not you are dealing with a sociopathic individual and ways to deal with the hardships of that realization.

Things To Do When Co-Parenting With A Psychopath

1. Practice the ‘Rule of Threes’

Only give someone 3 chances. After that, it’s best to cut your losses and run. One mistake such as a lie, a broken promise or a neglected responsibility should be forgiven since it could be a misunderstanding. The second mistake could be a serious mistake. The third strike should be the final one. Cut ties with them completely. This may be hard to do when children are involved, but if you are dealing with a sociopath and have been for some time…it won’t ever change and this will cause more stress and harm to your child that the pain of one parent walking away.

When you realize you’re dealing with someone who could be a sociopath, make a point of staying away from them. Do not try to cure them or beat them at their own game, you will never ‘win’. Again, this may be hard to do if you are co-parenting, just try your best to keep contact to a minimum. This will allow you to breathe and minimize stress for you and your child.

3. Don’t Try To Reform Them

With studies showing that efforts at curing sociopaths with therapy do not bear fruit, it is best to leave them alone. They will only waste your time and use the sessions to sharpen their conning and conversational skills. You simply cannot cure a sociopath. Only a person who has some humanity in them can be reformed. Those devoid of a conscience are beyond reform.

A sociopath will attempt to drain you of everything you have including your money, emotional well being, power, reputation and status. If they see you as a threat to their deceitful lifestyle, they will come after you. They would want to see you become completely desolate. They might try to get your fired from your job and begin to bad mouth you to friends. Take any possible preemptive measures, but most importantly…know who YOU are and do your best to not let their evil ways bother you.

5. Keep It to Yourself

How to deal with a sociopath? Do not confront the sociopath about their behavior and your plan to cease interaction. This will only backfire on you.

Do not try to accuse them of any wrongdoing. They won’t respond well and it might turn into a fight. You will lose more than they will.

7. Hold Back Your Emotions

A sociopath wouldn’t want to hear about our feelings especially if what you feel reflects negatively on them. Avoid getting emotional whenever you are in a confrontation with them. However, if they feel wronged by you, show them as much empathy as you would another person.

A sociopath will view any sort of ultimatums, emotional pressure and power plays as games or threats.

Do not play mind games with a sociopath. Do not compete with them, don’t try to outsmart them or even psychoanalyze them. Your focus should be on protecting yourself.

Don’t talk about being wrong or right. Sociopaths do not perceive right or wrong. They only understand power, and they want to have power over you.

Sociopaths have perfected the art of pushing people’s buttons in order to get their way with them. It is important to be on the lookout for this. How to deal with a sociopath? Make sure to stay calm and collected no matter what the person says. For example, they might tell you about a party you were not invited you just to rile you up.

One thing you need to realize about sociopaths is that they will use anything you turn them against you. They are professional manipulators, and so you should be wary of what you share with them. Keep communication short and stick to the facts; avoding shareing your address, your bank account, etc. Do not give your personal opinion on anything.

Flattery and compliments are different, and you should learn to tell them apart. Sociopaths use flattery as a tool for manipulation.

Sociopaths have an easy time manipulating those who pity too easily. They will give you all sorts of sob stories to get you to do their bidding. If you are constantly feeling pity for someone who hurts you, then you are probably dealing with a sociopath. Stay away from them. That’s how to deal with a sociopath.

Be careful out there and remember…as long as you are there for your child and create a loving, healthy environment for them…you and your child will have an incredible, fulfilling life. It will be the other parents loss in the end.