7 Reasons Why Good Men Don’t Cheat On Their Partners 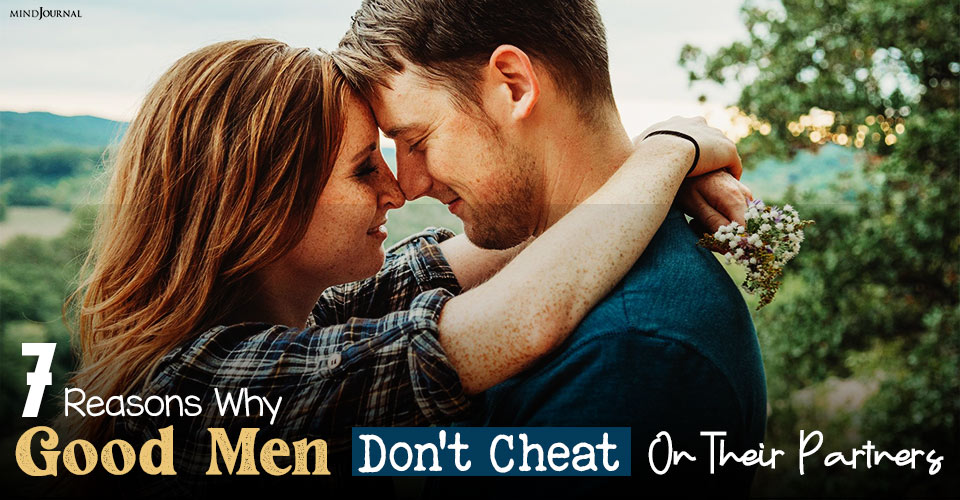 Cheating is one of the cardinal vices that should never be encouraged or taken lightly. No man in his righteous mind would ever think of cheating on his better half, let alone do it. A real man is identified by his commitment to a relationship. So, do good men cheat? The answer is a big, fat NO.

One man cheating can lead to widespread mistrust and a loss of faith in relationships and humanity in general. A healthy society is always cultivated by loyal men ready to commit to their women. The question is, do only bad men cheat?

Related: What Types Of People Don’t Cheat On Their Partners?

7 Reasons Why Good Men Don’t Cheat On Their Partners

Reason 1: Good Men Appreciate What They Have

Men who are good at heart know that life in itself is a gift. They are content with what life has given them and that includes their partners. They value relationships and the feelings others have for them. Good men don’t cheat on their partners and never play around with their emotions.

They acknowledge the love and affection they receive from people. Being content with what you already have is not something you’ll find in people nowadays, but a good man never allows negative circumstances to keep them from garnering a conscience that fuels appreciation and contentment.

After all, the world is made of small things that make our lives worth living. Hence good men value the woman they love and feel grateful to have them in their lives, and that’s one of the reasons why good men never cheat.

Reason 2: A Good Man Has Transcended His Primal Urges

The willingness to mate is central to a man’s primal urges. It has evolved with the primal instinct of procreation in animals. While animals look for different mates with every changing season, men, however, cannot do the same.

To cultivate a society of value and culture, a man needs to control his primal urges. And a truly good man not only controls them but eventually transcends his primal urges to establish a consciousness that values the love that lies beyond physical attraction. Because it is not physical lust, but empathy and emotional bonding that truly strengthens a relationship, and this is another reason why a real man never cheats.

Related: How Do You Know You Have A Good Man: 14 Signs You Have Finally Met A Good Guy

Reason 3: A Good Man Sees Beyond The Ephemeral

While most men get carried away by momentous feelings, a good man knows and values the very essence of everlasting love. Good men never cheat because they know that all the ephemeral sensations are nothing but mere infatuations that fuel impulses, not love.

And if a man were to respond to these fleeting sensations and take them as true love, then his virtue gets corrupted. It is characteristic of an animal to give in to these urges, but if a man were to do the same, his nature is reduced to that of an animal. A good man is always aware of this.

Reason 4: A Good Man Has A Strong Conscience

Our conscience determines our value and the impression we create in society. A corrupted conscience is a prime cause behind heinous crimes.

Good men don’t cheat on their partners because they understand that there should be a strong foothold over the conscience. A carefully constructed conscience on the lines of virtue and integrity is highly valued and cultivated by a good man. Therefore the chances of him betraying his better half are extremely thin if not zero.

This is one of the most significant signs he will never cheat. A man who does not respect his woman cannot be considered a true man. Loving your woman and respecting her at the same time reflects your character. Respect and admiration are two qualities that are waning in this age of conflict.

The fact that we have become more individualistic and overly opinionated implies that we are losing the quality of giving respect to each other. A good man values respecting others, and that includes his better half.

Whenever things involve his partner, he seeks and values her consent. This reduces the chances of argumentative violence that have become so common nowadays.

Reason 6: A Good Man Has Conquered His Insecurities

Most men nowadays tend to get envious of other men when they find their women having a good time around them. This only reflects their hidden insecurity. It clearly points out their inferiority complex and how they’re unsure of themselves.

A good man, however, knows who he is and where he stands. Men who don’t cheat on their partners, love and respect their better half and also cultivate self-worth and confidence.

Hence, a good man remains unmoved in such circumstances, because he knows that he’s not inferior to anyone and that his woman would never have an affair with someone else if she’s truly the right one for him. This confidence automatically elevates his social aura, thus making him all the more desirable.

This is one of the many reasons good men don’t cheat on their partners.

Reason 7: A Good Man Doesn’t Invest His Energy In Such Acts

Cheating involves hiding, lying, postponing, and a lot of calculations to cover up the heinous crime being conducted.

While opportunists spend their days shedding their sweat on these thoughts, a good man knows that it is increasingly foolish to spend your valuable time and energy on acts that in the long run are nothing but counterproductive.

The world to them is a beautiful place to be cherished. Good men create value, nourish them, and immerse themselves totally into it. To them, having affairs, and betraying their loved ones are not only crimes but also tiring and emotionally exhausting.

Real men don’t cheat because they value time and relationships, they always prefer investing more in cultivating healthy emotional bonds than in deceiving the people they love and who love them.

Related: 10 Actions That A True Gentleman Never Resorts To

What are your thoughts about why good men don’t cheat? Let us know in the comments down below!