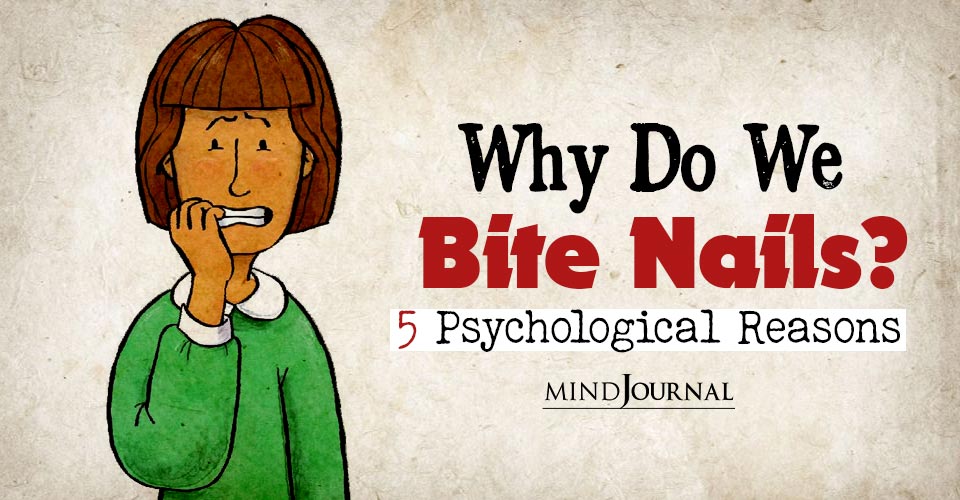 Since we were children, we have been told that nail biting is a bad habit to have, and sometimes it has been termed as a very disgusting habit too. But this is not a habit that everyone has, and for those who do, some of them turn out to be compulsive nail-biters. Even though it’s very easy to criticize them for this habit, sometimes the reasons behind it can be psychological and more serious than how it seems from the outside.

The occasional nail-biting is fine and doesn’t need to be taken that seriously, but when someone obsessively bites their nails, then it’s a cause for concern. Excessive nail biting is also known as onychophagia, and this is one condition that a lot of people suffer from. It is actually quite similar to other grooming disorders such as skin picking and hair pulling. Understanding the psychological reasons behind biting your nails might help you curb this habit, and let go of it for good.

Related: The Long-Term Effects of Childhood Trauma In Adult Life

Why Do We Bite Nails? 5 Psychological Reasons Behind Nail Biting

The behavior of nail biting is normally associated with anxiety, mental pressure, and tension, and doing it relieves some of the stress that you feel in your mind. Sometimes nail biting can originate in your childhood when perhaps you used to bite your nails in order to cope with the stress and pressure at your home or school. Because you were a child, and you didn’t really have a lot of power to handle the negative experiences coming your way, so biting your nails served as a coping mechanism.

The habit of biting nails usually starts at the age of 5 or 6 years, and boys are more likely to have this habit than girls. As children gradually step into adulthood and mature as people, they find it hard to let go of this habit, no matter how hard they may try.

The shadows of their childhood experiences, stress, trauma, and anxiety stay with them well into their adulthood and make it harder for them to let go of this compulsive habit.

Excessive nail biting can lead to deep injuries in the fingers and nails because when you are constantly biting your cuticles, it ends up exposing your nail bed and makes you susceptible to serious infections. And this is one of the reasons why nail-biters sometimes give up this habit of theirs, because obviously it never releases any kind of tension, nor does it make you feel good in any way.

However, when nail biting becomes overly excessive and starts to cause real harm to you, it quickly slips into the self-inflicted violence or self-harm category. If this habit is not treated or controlled at the right time, it can lead to serious consequences such as breaking bones, ripping of the skin on the fingers, and even amputation of the fingers.

3. Being obsessed with perfectionism.

Perfectionism can sometimes play a major part in nail biting, as some people are more likely to bite on their nails when they feel frustrated or bored.

For example, in a 2015 research, some people were chosen to prove or disprove this, in which half of them had body grooming habits, and the other half did not. They were then exposed to situations that had the potential to cause frustration, boredom, and even relaxation, to see whether it triggers them to bite their nails or not.

After the whole thing was finished, they were then asked about how many times did they feel negative emotions such as anxiety, anger, fear, boredom, and frustration during this whole experiment.

It was found that the candidates who were nail-biters felt a strong urge to bite their nails, whenever they were faced with difficult, stressful, and frustrating scenarios. They also felt bored which ended up with them biting their nails, whenever they were left alone for a few minutes with nothing to do. Researchers believe that people who identify as perfectionists find it hard to relax more and find it challenging to do their work at a normal speed, compared to people who are not perfectionists.

As a result of which, they are more likely to get more dissatisfied and frustrated about everything around them, whenever they feel like they are not living up to their true potential and are not reaching their goals. In order to deal with all these troubling thoughts and the mounting stress in their minds, they resort to nail-biting.

4. Compulsive behavior that helps to deal with stress.

Obsessive-compulsive disorder (OCD) can also be a major reason behind nail-biting tendencies. Come to think of it, it actually makes a lot of sense, doesn’t it? Nail biting is kind of a compulsive habit and a way of “relieving stress”, right? Do you feel this really strong compulsion to bite your nails, even though it is causing damage?

Biting your nails is simply a routine thing to do when you want to let go of all the stress that is plaguing you, and try to feel better about whatever it is that is bothering you. Doing this routine, and indulging in this compulsive habit may make you feel like you are dealing with the situation in a much better way, and this is the only way you can feel relaxed.

Just like every other compulsive behavior originates from a place of fear, stress, and anxiety, nail-biting is also the same. Even though it doesn’t help in making any stressful situation better, you might temporarily feel that it is.

5. Oral dependency might be the secret behind nail biting.

Sigmund Freud famously said that the habit of nail-biting can be associated with over-stimulation during a child’s breastfeeding phase. He believed that mothers who overly nursed their babies unknowingly created oral-dependent or oral-fixated adults. Even though there is no solid theory to back up this claim, if you come to think of it, babies are notorious for putting everything they come across in their mouths.

So maybe, this habit has not entirely changed even after someone steps into adulthood. This oral fixation stays the same, only the way of going about it is different.

5 Things You Can Do To Stop Nail Biting

1. Know what your triggers are.

The very first thing you need to do to stop your nail biting is to identify and acknowledge the triggers behind it. Be cautious and notice when you are actually biting your nails, and which situations are causing you to repeatedly indulge in this.

Are you bored, or anxious, and is that causing you to bite your nails? Or are you emotionally stressed out in any way and in order to cope with such a situation, you are biting your nails?

It’s very important to know the triggers that are pushing you towards nail-biting, and the moment you do that, the rest of the process gets easier. You can modify your surroundings to make it harder and more challenging for you to keep on biting your nails.

For example, if you find yourself biting your nails when you are with certain people, then maybe you shouldn’t hang out with them as much, because being with them is making you emotionally distressed. Or, if you are uncomfortable doing something and that’s causing you to bite your nails, then maybe it’s a better option to not do that.

Related: Top 10 Bad Habits You Need To Stay Away From

2. Try to address your latent emotions.

There can be various reasons behind the habit of nail biting, and sometimes those reasons fester beneath the surface AKA latent emotions. These emotions cannot be seen with your eyes, but they are there beneath the surface, silently stressing you out, and pushing you to bite your nails repeatedly. In order to deal with such a situation, you need to point out what you are thinking about, just before you start biting your nails.

What is the internal monologue that is playing in your mind? What are the exact emotions that you are feeling when you are starting to bite your nails? Is there any way you can challenge those unpleasant thoughts and change them to feel better?

More often than not, you might be biting your nails as a coping mechanism to deal with difficult and anxious thoughts that are bubbling in your subconscious. Knowing what these thoughts are, and working towards facing these emotions can help you a lot in dealing with your nail biting.

3. Get a beautiful manicure done.

Getting a nice manicure done will always stop you from biting your nails, because why would you want to destroy that beautiful piece of art?

Splurge on a nice manicure, that will not just make your hands look pretty, but will also serve as a strong motivation for you to stop biting your nails. Whenever you spend a lot of money and effort on something like this, you will always think twice before nibbling on your nails.

4. Keeping your nails short can be very effective.

You might notice that you tend to bite your nails more when they are long because biting off longer nails gives you a sense of satisfaction and makes you feel as if your emotions are easier to handle. So maybe trimming them short and maintaining that length might be a good idea, if you want to seriously stop biting your nails.

The logic behind this move is very simple: if there is not enough nail to grab with your teeth, chewing on them or biting them just won’t hold the same satisfaction. Also, if you come to think of it, keeping your nails shorter is also more hygienic and easier to maintain. So it’s a win-win from every aspect!

Related: How To Get Rid Of Bad Habits Using Psychology: 9 Science-Backed Ways

5. Engage your mouth and hands whenever you feel the urge.

One of the best and most effective ways of stopping your nail biting is by keeping your hands and mouth busy, whenever you feel a strong urge. The moment you feel like you want to bite your nails, try to channel that energy into doing something that will keep your mouth and hands busy, such as maybe squeezing a massage ball, which will not just distract you, but also stimulate and relax you too.

You might want to play video games whenever you feel an overwhelming need to bite your nails, or even chew some gum so that it keeps your mouth busy. Distracting yourself and keeping yourself busy is one of the best things you can practice when it comes to giving up the habit of nail-biting.

Nail biting is not really a good habit to have, and many people try their best to let go of this habit, however, sometimes it’s easier said than done. Nevertheless, knowing the psychological reasons behind this habit might help you understand it better, and even kick this habit, once and for all. Let us know your thoughts in the comments down below!

Want to know more about nail biting and the best way to stop biting nails? Check this video out below!

previousThe Animal You See First Reveals Something About Your Personality: Quiz
nextWhy Sometimes Saying “No” To Your Kids Is So Important