The Only Thing You Need to Know to Get Over Anything 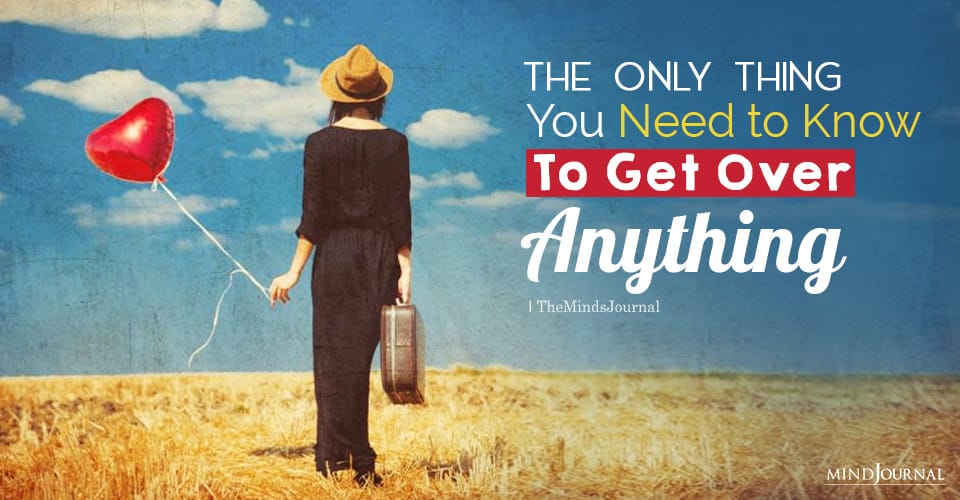 Do you worry too much? Is anxiety keeping you stuck in life? Worries can often keep us from pursuing our heart’s desires and keep us trapped inside our irrational fears. Despite how hard you try to get out, a single ounce of doubt can pull you right back into the dark abyss. But there’s a way that will help you get over anything.

After a lifetime of ups and downs and shucking and jiving to bend myself to job changes, divorces, childhood issues, abusive relationships, financial worries, one gnarly eating disorder, and a whole mix of other crap, I am a survivor. For many years I wasn’t as strong as I am now, I tumbled from here to there, and did what I needed to survive for myself and my kids, but I wasn’t learning anything, wasn’t taking charge. I was merely reacting.

These last couple of years sank the putt for me. I was tired of feeling emotionally battered as if I’d just climbed into the ring only to be clobbered again and go flying out over the ropes. I wanted to triumph over so much that I had merely lived through.

Related: 10 Healthy Ways to Get Through Difficult Times (Insights From Stoic Philosophy)

So I developed a philosophy, a mantra, a simple saying that has moved me over mountains.

“Do it now, and worry about it later.”

The Secret To Courage

“The day you stop worrying will be the first day of your new life; anxiety takes you in circles, trust in yourself and become free.” – Leon Brown

When you are unsure, afraid, held back by anything irrational in your life, this little sentence can give you the shot of courage you need to get through the moment. It’s been a silver bullet solution for me.

For years I craved meat, but my eating disorder dictated I shouldn’t indulge. I resisted for a long, damn time. Weight dropped off, I couldn’t climb a flight of stairs without panting, my iron level bottomed out. I wanted to get better, but nothing and no one I had talked to, reached me sufficiently enough to make a difference.

I decided after a few sessions with the psychologist at the eating disorder center that I would silence the inner me who I knew was full of BS when it came to the silly rules of eating I had made up. I wanted a burger. I wanted a steak. I wanted to enjoy a normal meal with my family at the dinner table and not feel like a freak, or that I had to defend the scant content on my plate.

“Our thoughts make us what we are.” – Dale Carnegie

I applied my saying and went on to overcome my eating disorder. When I shut my mind up and did it anyway, I was scared of taking that bite. Reintroducing meat to my body was a frightening, delectable, finger-licking ride. After I ate the burger, I reassured myself I would be fine, safe, and healthy. I was. And I was triumphant.

Taking the one step to do it, and then proving all would be okay, fueled me to get to the next goal.

I use this saying all the time now. It doesn’t matter the situation. Speaking my mind when I fear repercussions, moving to my loved one’s side when I need reassurance but dread rejection. Do it. If it doesn’t work out, then worry about it.

Apply for that job, you’ll figure out the next step when it becomes clear.

The next time you are tempted to hole up inside your house, or you are frozen with indecision, do what you know you should do, make the right choice worrying you. Think about what happens later. A lot of the time you won’t even have to, because what comes later is usually great.

Want to know more about how you can get over anything? Check this video out below!