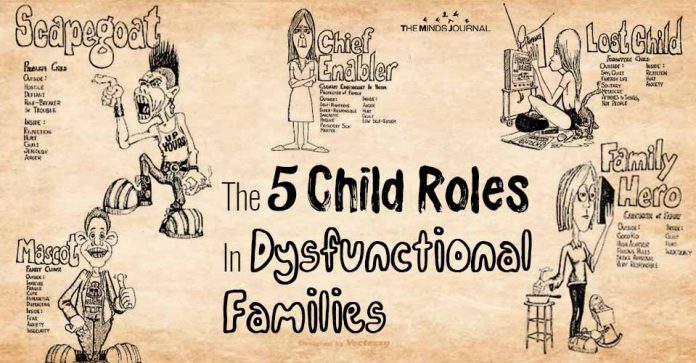 The 5 Child Roles In Dysfunctional Families

They will never argue with or criticize the narcissistic parent and are always trying to get everyone to get along, which also is not possible. They may be the only family member who doesn’t abuse the Scapegoat, but they might if they feel like it’s required. However, even if they do collude in the Scapegoat’s abuse, they will be less abusive than the other family members, tending to take a back seat or even sympathize with the Scapegoat in private. In trying to please everyone, they please no one and grow up feeling impotent and helpless. It’s a no-win situation.

When Rescuers become adults, they tend to unconsciously look for other abusers to “rescue,” having failed to do so in their families of origin. Like Scapegoats, Rescuers are likely to become abused themselves as adults, but it’s hard for them to leave an abuser because of their high level of empathy which keeps them tied to the abuser in their attempt to want to “help” them. They also tend to fall for an abuser’s promises to change and are easily “hoovered” back into a codependent relationship.

Have you ever been attracted to toxic people? Read Why Daughters of Narcissists Are Drawn to Narcissistic Men

In Balkanized families, the child roles can shift. The most common situation is a Golden Child becoming a Scapegoat, often upon reaching adulthood, if they fail to fulfill the unrealistic expectations put on them. (“You were such a disappointment to me!”) If a Scapegoat goes No Contact or leaves the family for some other reason, another child, possibly the Lost Child, becomes the new Scapegoat. Someone has to carry all the family shame. If the family only has two children, the Golden Child may find themselves suddenly scapegoated or serving both roles.

Want to know more dysfunctional families and how they function? Read The Narcissistic Family Tree

Children who serve as both Scapegoats and Golden Children (very common in only children) often develop Borderline Personality Disorder as well as severe C-PTSD and possibly other mental disorders like Dissociative Identity Disorder (almost always the result of severe emotional abuse).

Serving as both a Scapegoat and Golden Child is the ultimate mindf*ck because there isn’t even any consistency. The child never knows if they will be punished or rewarded from one minute to the next. Their only advantage (if they are an only child) is that they don’t have siblings who have been turned into flying monkeys who collude in the abuse.

If the family ever develops a need for a new Scapegoat (if the Scapegoat goes No Contact, dies, or disappears), the Lost Child is usually picked as a replacement, due to their non-confrontational, malleable temperament and lack of any real pre-existing role in the family.

Dysfunctional families are difficult to move on from and can have permanent effects on a child’s psyche and sometimes well into their adulthood.

If you want to know more about the child roles in dysfunctional families, check out this video below: