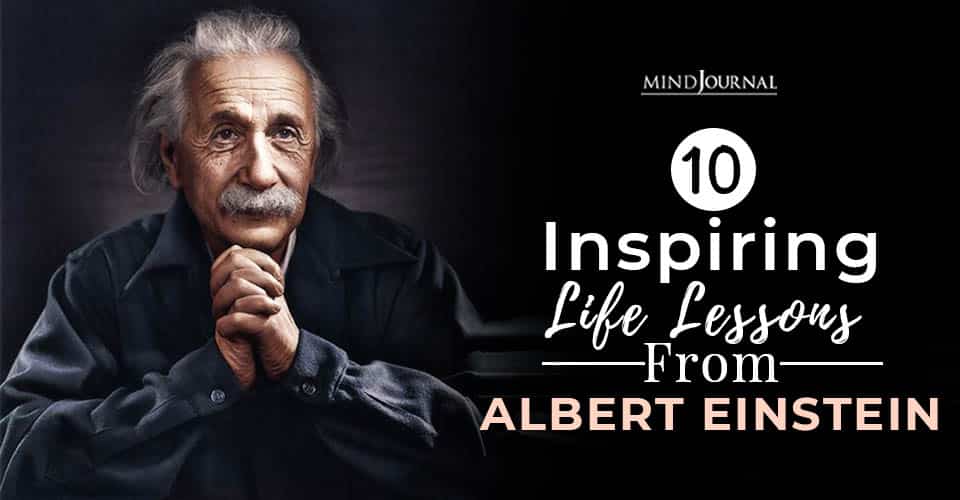 “Education is not the learning of facts, but the training of the mind to think.” -Albert Einstein

A boy who was considered “slow” and “average” in school, who later had to take up a clerk’s job in another country to make ends meet, went on to win the Noble Prize in Physics and contributed to the world of science in such a massive manner that even today scientists rely on his discoveries to make headway in modern research. The person we’re talking about is Albert Einstein- one of the greatest scientists and most influential personalities of all time.

His life, his genius, his work, his words are a source of constant inspiration to the world. In addition to revolutionizing scientific knowledge, Albert Einstein is also honoured for his humanitarian work.

Let’s take a look at this great mind’s philosophy of life.

“A human being is a part of the whole called by us universe, a part limited in time and space. He experiences himself, his thoughts and feelings as something separated from the rest, a kind of optical delusion of his consciousness. This delusion is a kind of prison for us, restricting us to our personal desires and to affection for a few persons nearest to us. Our task must be to free ourselves from this prison by widening our circle of compassion to embrace all living creatures and the whole of nature in its beauty.” -Albert Einstein

1. Be Driven by your curiosity

“I have no special talent. I am only passionately curious.”-Albert Einstein

Einstein always stressed the power of being passionate and curious. These are the two qualities that, according to him, were incredibly important in life, because passion and curiosity allow us to devote ourselves wholly to something, stretching our limits to overcome great challenges. What we are passionate about reflects our natural interest and when we pursue that, we feel an immense sense of joy and fulfillment. Hence, curiosity is just the tool through which our passions manifest themselves, guiding us to our true destination. All we need to do is trust.

Read: EINSTEIN’S RIDDLE – CAN YOU SOLVE IT? – MIND GAME

“It’s not that I’m so smart; it’s just that I stay with problems longer.”

Einstein highlighted the importance of perseverance in our work. He even said that his perceived high intelligence is a direct result of him spending more time with the problems that seem unsolvable. Often, in the face of challenges, we feel that we lack the confidence and resolve needed to overcome them. But continued effort works wonders, helping us break down hefty problems into manageable pieces.

We have to look at problems as opportunities and find ways to solve them. This practice reinstates our self-belief and boosts our confidence.

3. Focus on your present action

“Any man who can drive safely while kissing a pretty girl is simply not giving the kiss the attention it deserves.” –Albert Einstein

The point is to be wholly immersed in whatever you’re doing at the moment. Whatever you’re doing, give it your all, your full effort, time and attention. When you try to focus on multiple things at once, the consequence may be disastrous. The current culture is all about multitasking, but doing more than one thing at the same time, especially if it’s something important, isn’t encouraged as it drastically reduces the quality of work. What you must do instead is manage time better so that you can fit multiple tasks into your schedule.

4. The Imagination is Powerful

“Imagination is everything. It is the preview of life’s coming attractions. Imagination is more important than knowledge.”-Albert Einstein