5 Lies I Believed About Depression

Are you someone who suffers from depression, and have been for a very long time? Like many others, do you also believe many lies about depression?

On a warm spring evening in 2003, I considered ending my life.

I was driving home from a long day at grad school. I had been battling clinical depression on and off for several years and was going through a particularly nasty spell. At 28 years old, I couldn’t think, I couldn’t focus, and felt like my head was in a fog most of the time. I was emotionally numb and sleepwalking through life.

As I headed home, my thoughts turned as black as the night surrounding me. I wondered what it would feel like to swerve into oncoming traffic and put an end to my suffering with a great crash of twisted metal and flames. It would be a quick way to go.

Would I be missed? Would anyone care? Did it matter anyway?

I pressed on the gas and the car approached 80mph. My stomach tensed and I began to shake. I felt like I might vomit.

At the last moment, I came to my senses. What was I thinking?

Clearly, I wasn’t thinking and hadn’t for some time. Depression had its claws around my heart and mind, and I had become a different person. I couldn’t think, I couldn’t feel, and it was a struggle to even get up in the mornings. The anguish in my mind was so intense that the idea of dying sounded better than the mental and emotional anguish I was experiencing.

Depression is bad enough by itself, but in dealing with it my whole adult life I’ve made a number of mistakes that made it much worse. I believed five lies about depression, and in doing so became my own worst enemy.

With over 18 million U.S. adults suffering from depression, there is a pretty good chance that you or someone you know is walking this dark path. I’m sharing my thoughts on this topic to make you aware of these lies that are easy to believe. But more importantly, I hope that everyone who needs help will find the courage to take action and begin the journey out of the darkness.

Here Are 5 Lies I Believed About Depression 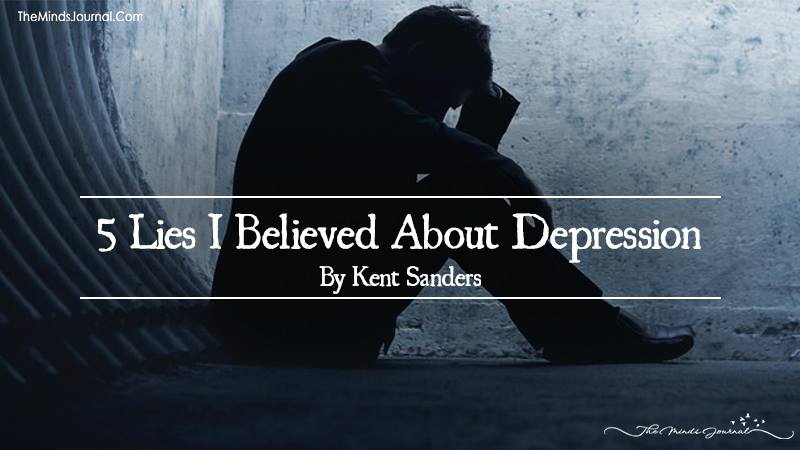 Lie #1: I can manage my depression on my own.

As an adult, it’s natural to think you can handle life on your own. Men are especially prone to this line of thinking. You don’t want to show your weaknesses and feel like you have to maintain a tough image. But on the inside, you may be falling apart.

The problem with a “tough guy” mentality is that it works against you when it comes to dealing with depression. You sink further and further inside yourself and it’s impossible to pull yourself out.

Depression is like quicksand. You can’t get out by yourself. You need help.

I tried to manage things by myself for way too long, and to be honest, I still struggle with that tendency. I’ve always been an independent person, reluctant to ask for help. For a long time, the only person who knew about my depression was my wife Melanie. But as I’ve gotten older and hopefully a little wiser, I have opened up to trusted friends and family members who I knew would be supportive.

Kent Sanders
Kent Sanders is a writer, professor, and creative coach. He is also the author of The Artist’s Suitcase: 26 Essentials for the Creative Journey, and host of the Born to Create Podcast. Kent's mission is to help others unlock their creative potential. You can find lots of resources for creative entrepreneurs at his blog, KentSanders.net, where he writes about creativity, mindset, and productivity.
-Adverts-