How To Reject Someone Nicely: 10 Tactful Ways 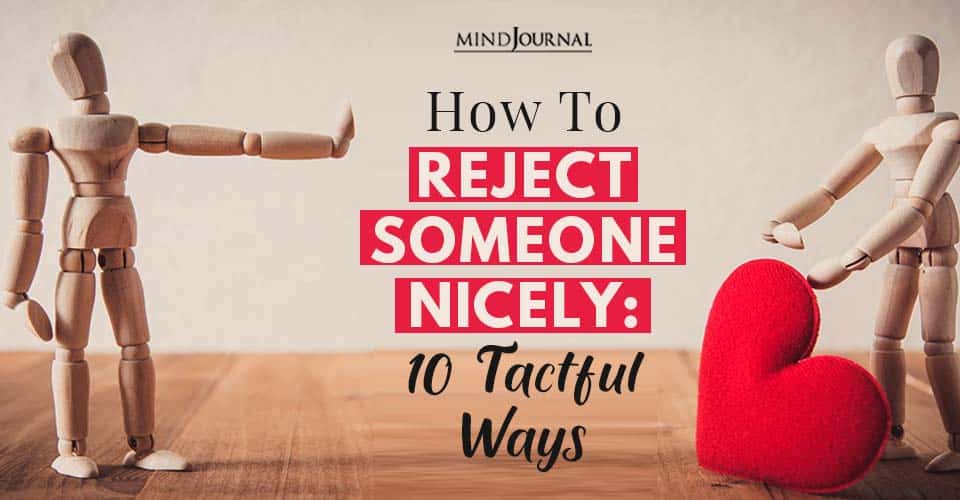 Knowing to reject someone tactfully has its own merit. Especially someone who has confessed that they harbor romantic feelings for you.

“She’s a simple woman, made to look complicated by a man who isn’t man enough to provide the things she deserves…”

In these wise words of R. H. Sin, a curtain is drawn to reveal the simplicity of a woman that is masked behind the complexity of dissatisfaction.

Women are, by far, more emotional and choosy when it comes to being in a relationship. They keep themselves confined within their own selves till they find their perfect match.

And, this is also probably the reason why when they are approached by many men with a proposal of a relationship, they feel bad to turn them down directly.

Even then, the women have developed their own diplomatic way of refusal over the years to politely say “NO” to men who would not be able to match their expectations.

So, in this article, you will get to know the diplomatic lines used by the women and the real inference that must be drawn from them so that you do not make the mistake of understanding them in a complicated matter.

Come join us as we take you through the secret mind of a woman who knows how to refuse a man tactfully.

Here Are 10 Tactful Ways You Can Reject Someone Nicely

1. “I’m just not ready for a relationship right now.”

Sometimes it so happens that you approach a woman without getting to know beforehand if she has a soft corner for you in her heart.

Sometimes it is hard for women to reject someone on their face, and in order to soften the blow they will tell you that they are not ready to be in a relationship at the moment,

2. “I feel like I should find myself right now.”

When a woman feels that she does not have a future with you, and both of you will never be happy together she resorts to this. Relationships are a big deal for women, and that is why they always look for the person with whom they will be compatible and happy.

If she does not feel that with someone, they will not give them a chance. But instead of rejecting them outright, they will fall back on this line, to keep things dignified.

Related: Schadenfreude: The Truth Behind Why Women Say No To Entitled Men

This is perhaps the most common line that women use especially if they have known that man for a long period of time. This implies that the man is merely a friend to her and she would not consider taking the friendship to a more personal level.

Known as “friendzone” in the colloquial language, women feel it is better to say this that be insensitive and end up hurting someone’s feelings very badly.

Women who are straightforward and do not like to beat around the bush will reject someone by directly telling them that they are not interested in them, and there is absolutely no future.

If you are one of them, then keep in mind that you do not need to defend yourself, or give extra explanations when you reject someone. You are not interested. Period. And if the guy in question continues to pester you even after that, simply stay away from him, and do not engage with him in any way.

When you say this to someone if you are not interested in them, you are putting forward the message loud and clear, that there is absolutely no chance of you both having a romantic connection.

Having a spark in a romantic bond is crucial, and if you don’t feel that with that man, then there is no point in taking things further, only for them to fail later.

Related: 5 Unmistakable Signs He’s Not That Into You

This statement is again a very popular one when it comes to rejecting a date. If you don’t have the heart to reject someone on their face, then it is better to tell them that you are busy with something else, and you won’t be able to make it.

Many people feel emotionally shattered when the person they like refuse to go out with them, so in order to lessen the pain of the rejection, this is one of the best ways to say no to their proposal.