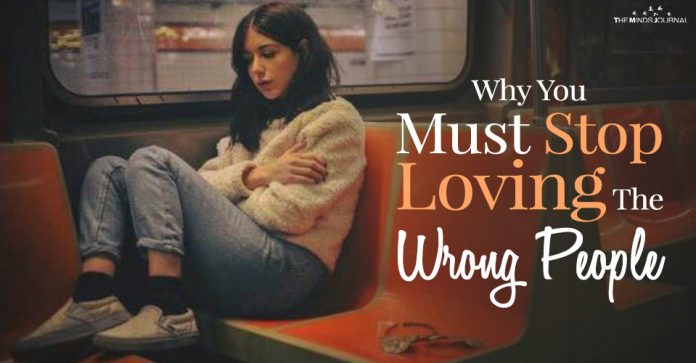 Why You Must Stop Loving The Wrong People

Loving the wrong people: Not everyone deserves your love, respect, and adoration. Stop. Reflect. And realize that you need to protect yourself and your heart from getting hurt.

Listen up, not every person deserves the love you have to give.

Take a moment to reflect on the society that we are living in. A society of participation trophies—awards for just showing up. A society of some high school football teams who have stopped keeping scores at games so nobody’s feelings get hurt.

A society of endless internet memes that proclaim that everyone deserves love and is perfect just the way they are. But whose love is it that they are deserving of? It has to come from somewhere – and that somewhere is you and me.

Do you feel that everyone is deserving of the love you can give?

Now, this may not be the warm and fuzzy feeling of an article you are used to from me, but sometimes warm, fuzzy, unconditional reinforcement isn’t good if you’re reinforcing the wrong thing.

The issue with a society that teaches everyone is perfect the way they are, is that it encourages no improvement or change. No standards. No willingness to move forward because the current scenario is just fine, right?

Some people lie. Some people cheat. Some people abuse. Some people mistreat you or others around you. And if we don’t stand up and tell them what they’re doing is wrong, they will never change. It is like a dog who misbehaves and we continue to reward him/her with treats, expecting that someday they will understand their actions are unacceptable. It doesn’t work that way.

Those are the people who deserve your love.

I know there will inevitably be people who talk about psychological issues and things people can’t control. I know some out there had bad childhoods or traumatic experiences that affected the person they are, and that does not mean they are undeserving of love – but the expectations should be set that in order to actually receive this love they deserve (from you), they need to work to change and improve.

Stop giving your time, your body, and most of all – your heart, to people who haven’t earned it.

Raise the standards you have for yourself and those around you. Raise your standards for what you expect out of people in order to allow them into your life.

Give everyone a chance to earn what you have to give, but don’t give it away freely, or eventually, you will have nothing left.

Why We’re Attracted To People Who Are Wrong For Us