When She’s Got A Good Heart But Loses Faith In You, It’s Over 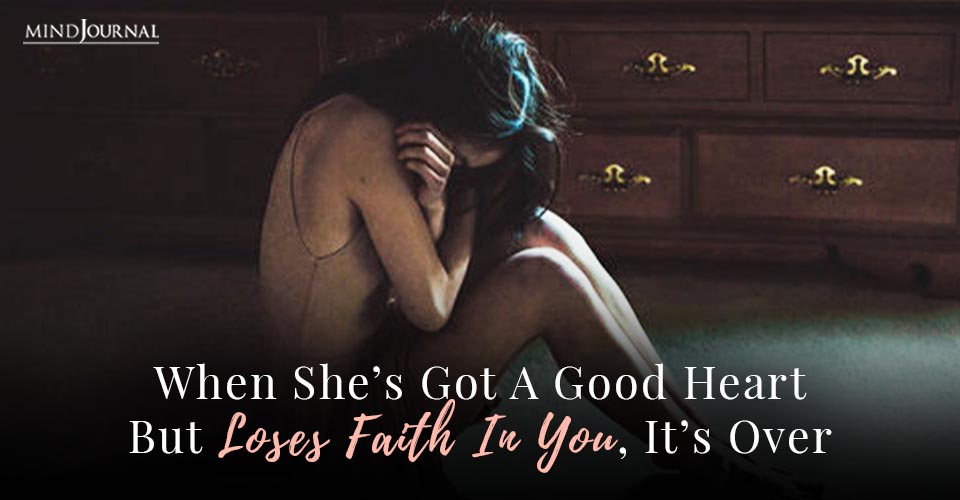 She will love you with her everything, but once she loses faith in you, you will lose her forever, and there’s no coming back from that.

She’s got a good heart but loses faith in you once you become disloyal.

She’ll literally look for any excuse to not give up on you.

The thing about people with good hearts is they believe everything you tell them. Not because they are naive or stupid but they believe in the good in people. They want to believe everyone is as honest and genuine and has the best intentions as they do.

Even though they’ve seen the world that is opposite, they choose to see the best in people no matter how many times you let them down.

She’ll give chances until you prove her right.

They go out of their way for you and do everything they possibly can for you without thinking twice about it.

She isn’t naive as much as she has faith.

Related: How Our Hearts Are Changed By Betrayal

But a good heart didn’t become that way simply because it’s only known good. It’s a deliberate choice every day to go against everything they’ve seen and known.

It’s being the example they might not experience but they believe in doing right and doing everything you can.

But even the best hearts and the best people get tired.

Their faith is tested. Their character is challenged. With everything, they believe in and have followed they begin to wonder why are the way they are when it ends with them getting hurt every time?

But instead of allowing others to change them they simply let go of the person who is making them feel inadequate and not good enough.

And it will kill her to be wrong about you.

The truth is when a person with a good heart gives up on you, it’s actually breaking their heart to walk away. They look over their shoulder in hopes they can turn back around and the next chance they give you will be the right one.

Related: 12 Reasons Why The Kindest People End Up In Toxic Relationships

There is a fine line people with good hearts walk between trying too hard and self-respect.

They respect you which is why they’ve tried so hard but the challenge comes in respecting themselves more to just walk away.