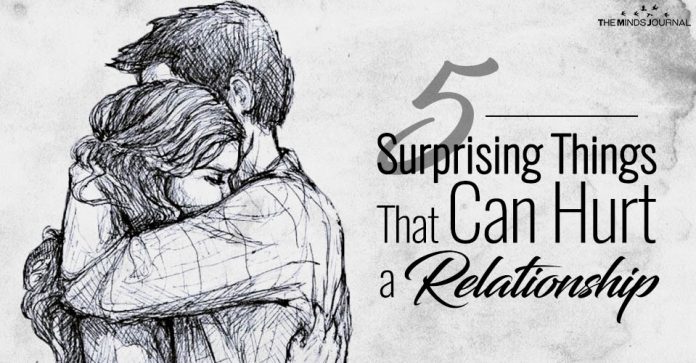 5 Surprising Things That Can Hurt a Healthy Relationship

Unless you have been living in some kind of fairy tale, you know that there are things that can hurt a healthy relationship, things that you want to avoid so you can stay in one.

Many relationships fall apart because of the 1000 little cuts, those everyday instances that cause the other person pain. They seem like small things but, taken together, they can be very damaging.

Many causes of the damage are obvious: treating each other with contempt, leaving your underwear on the bathroom floor, not taking out the garbage when prompted to, abstaining from sex, etc.

But there are other small things that people do often, things that might not be so obvious but are very important.

Lying by omission means lying by omitting something from a conversation. For example, when asked why you are late coming home, you say that you stopped at the bar for a drink but you omit that you were there with a friend she doesn’t like. You know she will be upset and you don’t want to hurt her or cause any drama.

There are two reasons why lying by omission is a thing.

So, be honest. Always.

This one might be a little bit more obvious but it’s one very important things that can hurt a healthy relationship.

Not following through with something, without explanation, is a sign of contempt. That you just don’t do something for whatever personal reason and you don’t talk to your partner about the why and how you will sow the seeds of substantial disrespect.

My man and I used to have this problem all the time and then we finally talked about it. What we learned is that, when we make a plan, I assume that it’s a done deal and he assumes that we are still going to talk about it. That is just how we both have operated before our relationship. We realized that we needed to be clear about our plan – did we decide to do it and then it would be done or is more discussion necessary? Knowing these things has made following up much easier for both of us.

I had a boyfriend once who hated how hard I slammed the door of his truck. I didn’t know that I was slamming it – I just thought I was closing it like I closed any car door. But I guess I was closing it too hard and he didn’t like it.

Of course, I thought that he was ridiculous – this was a big huge truck and, really, how could little old me cause it any damage. We fought about it all the time.

What I have realized, in retrospect, is that me not closing the truck door with such force made him feel ignored and disrespected. He loved that truck and wanted to take care of it and he felt like my slamming the door was going to harm it.

Is there something that your partner does that they love but seems absolutely ridiculous to you? If there is, accepting it instead of pushing back on it could make a huge difference for your relationship.