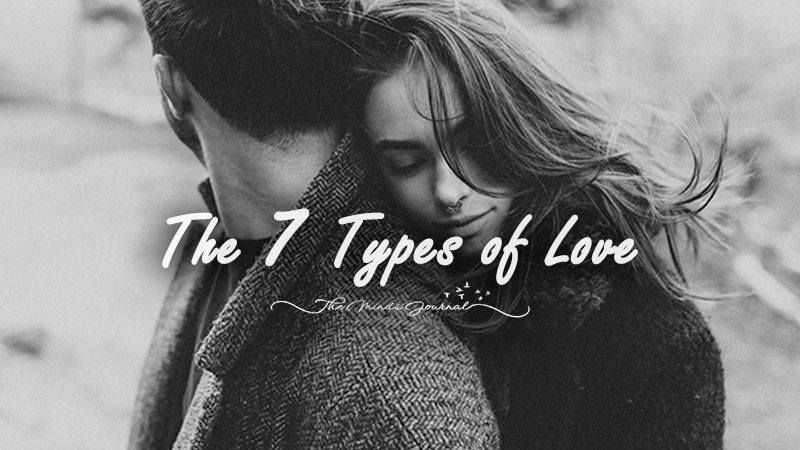 The 7 Types of Love

Everyone seems to be looking for romantic love, but few of us realize that far from being timeless and universal, romantic love is actually a modern construct, one that emerged in tandem with the novel. In Madame Bovary(1856), Gustave Flaubert tells us that Emma Bovary only found out about romantic love through “the refuse of old lending libraries.” These books, he wrote:

“…were all about love and lovers, damsels in distress swooning in lonely lodges, postillions slaughtered all along the road, horses ridden to death on every page, gloomy forests, troubles of the heart, vows, sobs, tears, kisses, rowing-boats in the moonlight, nightingales in the grove, gentlemen brave as lions and gentle as lambs, too virtuous to be true, invariably well-dressed, and weeping like fountains.”

But there are many other ways to love, not all of which are compatible with romantic love. By preoccupying ourselves with romantic love, we risk neglecting other types of love that are more readily accessible and may, especially in the long term, prove more healing and fulfilling.

The seven types of love listed below are loosely based on classical readings, especially of Plato and Aristotle, and on J. A. Lee’s 1973 book Colours of Love. Can you think of any other types?

Eros is sexual or passionate love and is the type most akin to our modern construct of romantic love. In Greek myth, it is a form of madness brought about by one of Cupid’s arrows. The arrow breaches us and we “fall” in love, as did Paris with Helen, leading to the Trojan War and downfall of Troy. In modern times, eros has been amalgamated with the broader life force, something akin to Schopenhauer’s will, a fundamentally blind process of striving for survival and reproduction. Eros has also been contrasted with Logos, or Reason, with Cupid, depicted as a blindfolded child.

The hallmark of philia, or friendship, is shared goodwill. Aristotle believed a person can bear goodwill to another for one of three reasons—that he is useful; that he is pleasant; and, above all, that he is good, that is, rational and virtuous. Friendships founded on goodness are associated not only with mutual benefit but also with companionship, dependability, and trust. For Plato, the best kind of friendship is that which lovers have for each other. It is a philia born out of eros, and that in turn feeds back into eros to strengthen and develop it, transforming it from a lust for possession into a shared desire for a higher level of understanding of the self, the other, and the world. In sum, philia transforms eros from a lust for possession into an impulse for philosophy.

Storge (‘store-gae’), or familial love, is a kind of philia pertaining to the love between parents and their children. It differs from most philia in that it tends, especially with younger children, to be unilateral or asymmetrical. More broadly, storge is the fondness born out of familiarity or dependency and, unlike eros or philia, does not hang on our personal qualities. People in the early stages of a romantic relationship often expect unconditional storge, but find only eros, and, if they are lucky, philia. Over time, eros often mutates into storge and, if we are lucky, there is philia and pragma (see below) as well.

Agape is universal love, such as love for strangers, nature, or God. Unlike storge, it does not depend on filiation or familiarity. Also called charity by Christian thinkers, agape can be said to encompass the modern concept of altruism, defined as an unselfish concern for the welfare of others. Recent studies link altruism with a number of benefits. In the short term, altruism leaves us with a euphoric feeling—the so-called “helper’s high.” In the long term, it is associated with better mental and physical health, as well as longevity. At a social level, altruism serves as a signal of cooperative intentions, and also of resource availability and so of mating or partnering potential. It also opens up a debt account, encouraging beneficiaries to reciprocate with gifts and favors that may be of much greater value to us than those with which we feel able to part. More generally, altruism, or agape, helps to build and maintain the psychological and social fabric that shields, sustains, and enriches us. Given the increasing anger and division in our society, we could all do with quite a bit more agape!

Dr Neel Burtonhttp://www.neelburton.com/
Dr. Neel Burton is a psychiatrist, philosopher, writer, and wine-lover who lives and teaches in Oxford. He is the recipient of the Society of Authors Richard Asher Prize, the British Medical Association Young Authors' Award, and the Medical Journalists' Association Open Book Award.
- Advertisment -