6 Reasons Why Strong Women Get Emotionally Attached So Easily 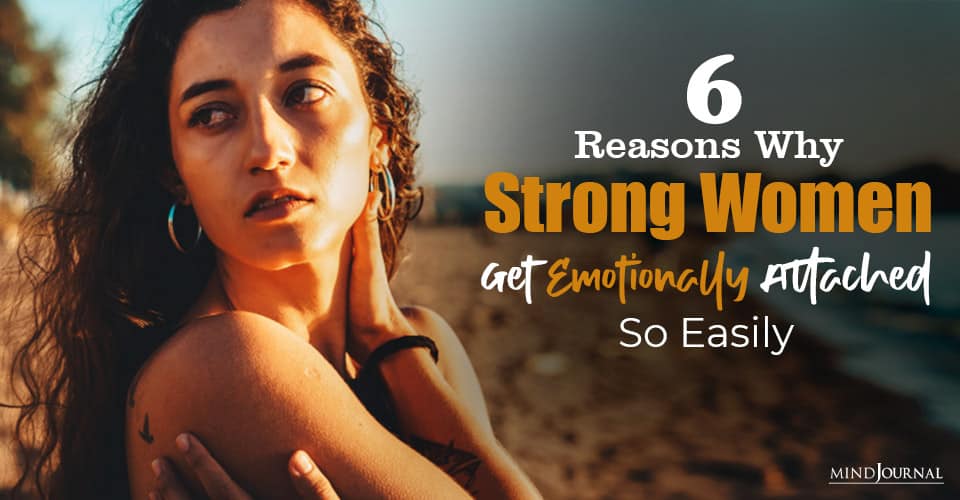 Strong women might come off as emotionally withdrawn but they also tend to get attached quite easily.

Strong women go through their days with passion and persistence. They know exactly what they want, and as a result, they aren’t afraid to pursue and ask for it.

This translates to their relationships, too.

Because these women are looking for someone who understands and appreciates their strength, it makes sense that when they find someone who matches that description, they fall. And fall hard.

1. Because they know what they want.

Strong women get attached easily because they go into everything—including relationships—with their full hearts. They are incredibly passionate and determined, and when they find who they feel is ‘the one,’ they’re ready and willing to make everything work.

2. Because they are fiercely positive.

Strong women see the best in the people they love. They don’t believe in stressing over what they can’t control, so instead, they trust that the men they give their hearts to have their best interests in mind.

Strong women are incredibly positive, too. They don’t think of worst-case scenarios or what could potentially go wrong. Instead, they live with open, determined hearts.

3. Because they aren’t scared of getting hurt.

Strong women are fearless. They know that there’s a potential that they might get hurt by loving the wrong people, but they aren’t scared of that possibility.

To them, the most important thing is giving people chances and following their hearts.

4. Because they’d rather take risks than wonder what could have been.

To strong women, taking risks is of utmost importance, especially if they feel like there’s the potential for a relationship. They’d rather try to build a connection and have it fail than sit back and wonder what could have happened.

5. Because they know that heartbreak is temporary.

They know that if they fall for someone there’s a chance the relationship won’t be perfect, but they’re still willing to try because they know they’ll eventually heal.

Related: Strong Women Never Give Anyone The Power To Destroy Their Happiness

6. Because they believe in love.

Above all, strong women believe in love. That’s why they get attached so easily—because they know that love is real and they can feel it in their bones.

Sure, there are plenty of imperfect people in the world. But on the search to finding the right one, strong women are going to fall, and fall deeply because they believe their forever person is out there.

“Sometimes I wake up and think I look horrible. And sometimes I see a strong woman.” – Irina Shayk