My friend Jonathan Shapiro has a morning routine. Every day on his way to work, he buys a newspaper from the same street vendor, whose newsstand is by a busy subway station in New York. Though both Jonathan and the vendor have every incentive to rush through the exchange of goods for money and get on with their days, they always take a moment to have a brief conversation.

Their little exchange, as humble as it may seem, reveals a great deal about how we can each lead more meaningful lives, as I write in my new book, The Power of Meaning: Crafting a Life that Matters.

Many of us are so caught up in our own lives, so rushed and preoccupied, that we acknowledge the people we are interacting with only instrumentally. We fail to see them as individuals. But Jonathan and the vendor break outside of their cocoons and form a brief bond with one another. Each of them lets the other one know that he is heard, seen, and appreciated—that he matters.

If you ask people what their most significant sources of meaning in life are, they, perhaps unsurprisingly, list their close relationships. But, as I researched my book, I discovered something that did surprise me: our loose ties to others can be potent sources of meaning, too.

That’s because one of the pillars of a meaningful life is a sense of belonging—which you can cultivate with your partner, children, and closest friends, of course—but also with your newspaper vendor, local barista, and even a stranger on the street.

These micro-connections are sources of meaning we can all tap into to lead deeper and richer lives.

When people feel like they belong, according to psychologists Mark Leary and Roy Baumeister, it’s because two conditions have been satisfied. First, they are in relationships with others based on mutual care: each person feels valued by the other. When other people think you matter and treat you like you matter, you believe you matter, too—like Jonathan and the vendor.

Second, they have frequent pleasant interactions with other people. Those moments can be joyful and fun, like when a parent and child play, or more emotionally neutral, like when a content couple holds hands while watching television together. But the key is that they happen on a regular basis and are not negative—again, like Jonathan and the vendor.

Belonging isn’t a fixed trait of relationships; we can each build belonging with another person by doing certain things.

One excellent way is to make sure we’re responding to one another’s bids, as the psychologist John Gottman calls them. In relationships, people are constantly making bids for affection. For example, let’s say a couple is sitting at the breakfast table and the wife comments on an interesting headline in the newspaper. At this moment, she is making a bid for her husband’s attention and hoping that her husband responds by acknowledging her warmly.

Her husband now has a choice. He can either ignore her bid or barely acknowledge it. Or he could affirm her bid by saying something like “how interesting—tell me more”—and this would create a moment of belonging that both of them could share.

But if small moments can kindle belonging, they can also destroy it.

For example, one day, when my friend Jonathan went to buy the paper, he realized he had only big bills. The vendor could not make change for Jonathan, so he smiled widely and said, “Don’t worry, you’ll pay tomorrow.” The vendor was making a bid to take their relationship to a higher level of trust and intimacy. But Jonathan tensed up and shook his head. He insisted on paying for the paper, so he went into a store and bought something he did not need so he could make change. He handed the vendor a dollar and said, “Here you go, to be sure I don’t forget.”

In that instant, the dynamic of their relationship changed. The vendor reluctantly took Jonathan’s money and drew back in sadness. “I did the wrong thing,” Jonathan later said. “I didn’t accept his kindness. He wanted to do something meaningful, but I treated it as a transaction.”

The vendor isn’t the only person, of course, who has felt cut down by rejection. Psychologists have found that social rejection can make both the rejected and the rejecter feel alienated and insignificant. As Jonathan learned on a crowded street corner, the smallest moment of rejection can knock the meaning out of a connection as easily as the smallest moment of belonging can build it up. After Jonathan dismissed the vendor’s bid for mutual trust, both of them left each other that morning feeling diminished.

Fortunately, the two men were able to restore their relationship. The next time Jonathan saw the vendor, he brought him a cup of tea. And the next time the vendor offered Jonathan a newspaper, Jonathan thanked him and humbly accepted his gesture of kindness. They continue to share a quick conversation each day.

We can’t control whether someone will respond to our bids, but we can all choose to reciprocate one. We can decide to respond kindly, rather than antagonistically, to one another.

We can choose to value people rather than devalue them. We can invite people to belong. And when we do, not only will our own lives feel more meaningful—but our relationships will be better, too.

By Emily Esfahani Smith
This article was originally published on The Gottman Relationship Blog.

If you want to build a deeply meaningful relationship full of trust and intimacy then get your free copy of our popular ebook here. 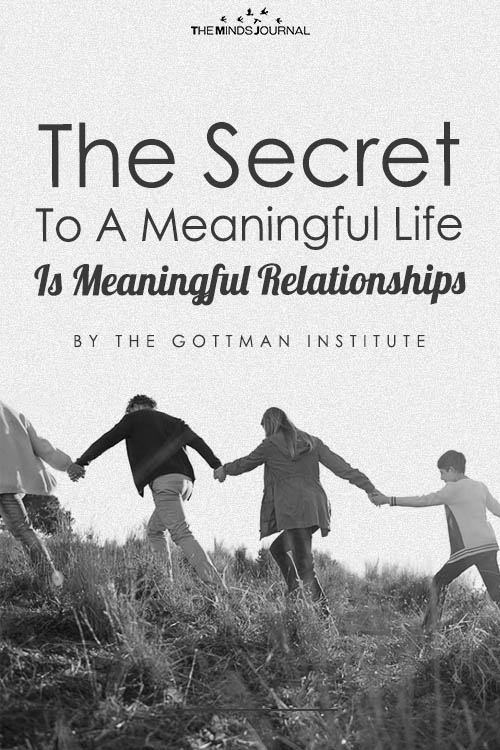 The Gottman Institute
The Gottman Institute uses over 40 years of research on thousands of couples to provide research based tips on how to make love last. Our research has saved troubled relationships and strengthened happy ones. Get your free copy of 7 Signs Your Relationship Will Last by clicking here Workshot for Couples Professional Training Certificate Courses

What Would You Do In This Situation First? Your Answer Reveals Your Personality Traits

What You Need To Change In Your Life, According To Your Zodiac Sign

Type A Personality Quiz: Do You See Tree, Roots Or Lips?
Up Next

When you try to hold on to the one you love, do they slip away like grains of sand? Maybe you need to loosen your grip a little bit more and learn how to not be clingy in a relationship.

We know how much it hurts to be called clingy or needy, just because one cares too deeply about another person and wants to be a part of their lives. With all the atrocious things humans inflict upon each other, does the need for love and care pose that big a problem?

Sadly, according to a study, clinginess and lack of personal space are the top relationship turn-offs. So, when does it go from sweet and nurturing to overbearing and smothering? And how can you manage your need for reassurance so that it doesn’t push your loved one away?

Does love mean letting go of the one you love or holding on to them for dear life? Does love mean the little things you do together or the big dramatic gestures? What love means to you exactly?

As we all are different, so are our convictions, thoughts, and principles. Even when it comes to love, the great equalizer, our perspectives vary. For some, love means holding hands and taking selfies together while making weird faces, and for some, love might mean deep conversations about life and relationships.

However, as long as you and your partner are on the same page regarding what love means to you as a couple, you are golden.

And as the zodiac signs influence our personality and behavioral traits, they are a sure shot-shot way to know what love means to you and someone else. This way, you can understand yo

Intimacy might not look the same for everyone, as intimacy is not really a black and white concept. What defines intimacy for you, might not have the same appeal for someone else. Society is changing as we know it, and it's becoming more and more accepting of every sort of relationship and love today. Amongst all the types of relationships, throuple relationships are one of them.

The spectrum of romantic relationships is gradually widening, and people are slowly beginning to recognize and respect throuple relationships, instead of ridiculing them or dismissing them as immoral and dirty. Even though we have come a long way, we still have a long way to go.

Love. The one thing everyone wants. The one thing everyone seeks. Love is the closest thing to magic in our dull, dreary, gray hued lives. Love lights up the darkness in our hearts and makes us feel warm in the chilly weather of loneliness. No wonder most of us are so desperate to love and be loved. We frantically run around looking for the one, but we need to stop looking for love and let it find us.

Love hurts. No, not like those cheesy Hollywood movies or romance novels. Real love is a lot messier, filthy, and painful. No matter how much you may love someone, you either get hurt or end up hurting someone you love.

As the old saying goes, we hurt the ones we love the most. Yes, it sounds terrible, but there is actually some science to it. When we love someone, whether it’s romantic or platonic, we let our guards down and become honest, open, and vulnerable with each other. While this should make our relationship stronger, in reality, it creates the ground where we hurt the ones we love, whether intentionally or unintentionally.

We fight.
We argue.
We shout.
We ignore them.
We blame them for our mistakes.