How Paranoid People Use Projection As A Defense Mechanism 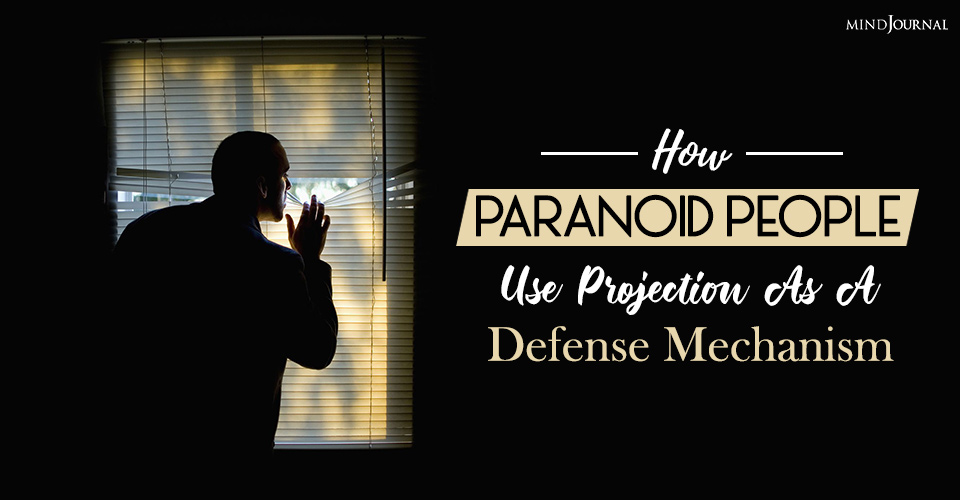 Being paranoid and projecting your feelings onto others sometimes go hand in hand, and if this is not handled in the right way and at the right time, it will just get worse over time.

We cannot know what others feel, so we often assume they are feeling what we would feel under similar circumstances. That is empathy. But when you empathize with someone else, you realize that you are assuming the other person is responding as you would respond. Projection, on the other hand, is a process by which feelings are experienced as external rather than coming from inside.

The person who is projecting thinks the feeling belongs to the other person. When the projection is a dominant defense and the person is incapable of distinguishing between self and other, we say that person is “paranoid.” That is a psychotic state, but many non-psychotic people have paranoid character styles. Projection is their main defense against experiencing unpleasant feelings.

Projections can cause serious misunderstandings and interpersonal problems. Jonathan projects that other people think he is not smart because he did not go to an elite college. When he starts a conversation based on that idea, he feels angry and tries to show he is smarter than the other person. This often leads to unpleasant responses.

Related: The Paranoid Partner: 20 Behavioral Traits of A Paranoid Personality in Relationships

Another patient, Jack, is quite judgmental and projects his critical judgments onto other people and then avoids seeing or talking to them because he does not want to bear their anger or criticism. Projection is malignant for Jack because it keeps him isolated from all the people he imagines are angry at him. Ironically, the defense causes the dreaded response because when he doesn’t respond to emails or phone calls, people do get angry at him.

Another patient, Patricia, projects all her doubts about her girlfriend Janet onto her friends. She imagines they think Janet is dumb or that she is not attractive. Patricia doesn’t want to socialize with her friends because of her distorted expectations of their feelings about Janet. After long periods of avoiding socializing with friends, Patricia feels angry at Janet for keeping her isolated.

In therapy sessions, it is often difficult to convince patients that they are projecting their feelings onto me. For example, my patient Diana says, “You think I’m a terrible person because I am cheating on my husband and lying all the time.” I think she is doing something that makes her feel bad about herself and could potentially break up her family, but she thinks she is a terrible person. She is projecting her judgment of herself onto me.

Similarly, Paula often comes late and blames the traffic or the subway. She usually arrives angry at me because she imagines I think she did it on purpose. When we discuss it, it often emerges that she left her house too late to get to my office on time because she wanted to make a phone call or finish a crossword puzzle. I do think she did it “on purpose.”

But the fact that the projection is sometimes correct, does not take away from the fact that she was projecting. Paula finds it difficult to own her own critical feelings about being late.

In conclusion, while we all project sometimes, people with paranoid character styles use projection as their dominant defense. Projections distort the person on whom the negative feelings are lodged which often leads to problems in marriages, friendships, and work situations.

Related: Projection: The Lethal Weapon Narcissists and Abusers Use To Manipulate Others

Most of the time, the people who are being projected upon don’t even realize it. They only see the consequences—accusations and anger. But when the negative projections are persistent and the person cannot be dissuaded from them, it can destroy relationships. No one wants to be the container of someone else’s unmanageable feelings.

Roberta Satow is a New York-based psychoanalyst, speaker, and author of Doing the Right Thing: Taking Care of Your Elderly Parents Even if They Didn’t Take Care of You, Gender and Social Life, and the novel: Two Sisters of Coyoacán. She is a professor emerita of the department of sociology at Brooklyn College and the City University of New York. Dr. Satow speaks and writes about issues of aging, gender, and mental health. She has been quoted in The New York Times, O, The Oprah Magazine, on ABC News and other national media platforms. She gave the keynote addresses at the EAP Symposium on Diversity and Well-being for the National Defence Department of Canada, Ottawa, and the New York City Dept. of Aging White House Conference on Aging. She has also appeared on The Diane Rehm Show, AARP, Prime Time Radio, and several other NPR programs.View Author posts