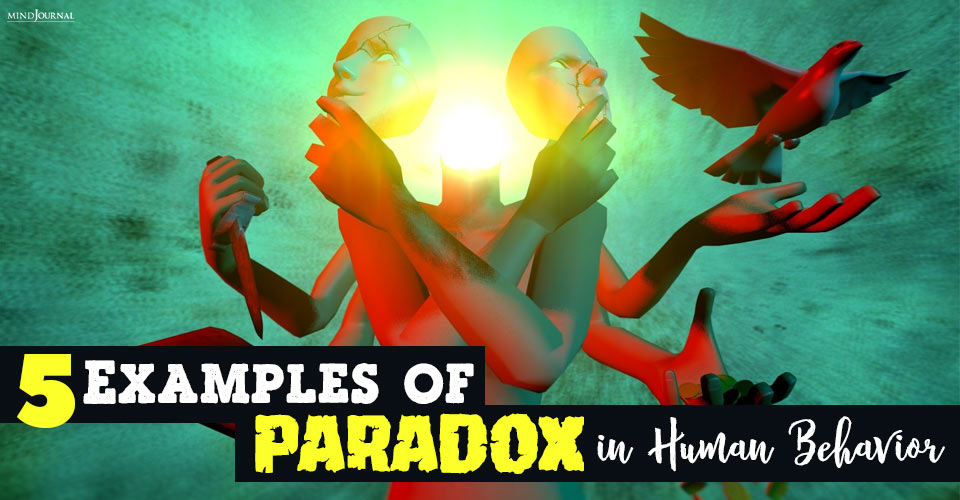 Mankind is an irrational, contradictory and endlessly inconsistent species. So, let’s take a step toward understanding paradoxes and embracing the contradictory ideas. Here are examples of paradox in human behavior.

Because of the complexity and unpredictability of our minds and the fact that most of our behavior is ruled by our subconscious depths, we act in very bizarre ways that often contradict what we feel deep down.

As something of a sociologist (of my own making), I have always been intrigued by not only the absurd behavior of others, but the paradoxical behavior that I also show that extends beyond the barriers of logic.

Perhaps one of the greatest realizations we can have in life is that everything is not as it seems on the surface, particularly people. So to be able to clearly see and appreciate the ambiguity and contradictory nature of everything around us gives us a much deeper understanding and appreciation of others.

Here are 5 interesting examples of paradox I’ve picked up on in human behavior. Remember that not all examples of a paradox here are always true, only sometimes.

1. Aggressive self-confidence is a reflection of inner feelings of weakness and inferiority.

To overcompensate for feelings of powerlessness, people (often men) replace this with self-enforced self-confidence, aggression and dominating displays of behavior.

Ironically, this often fools the person into believing (at least consciously) that they are an “alpha” male or female, despite their paradoxical unconscious fear of being a “weakling” or “small.” So when you meet a person who is constantly trying to “one-up” you, this is almost always a reflection of a deeper inferiority complex.

2. Sexual promiscuity is a reflection of inner feelings of ugliness and worthlessness.

Particularly in women, sleeping around or being “easy” is often portrayed as something befitting femme fatales, nymphomaniacs and “sluts.” However beyond that often lies feelings of immense insecurity, particularly in regards to body-image and self-esteem.

Paradoxically, the more a person sleeps around the more desirable and therefore worthy (and simultaneously unworthy) they feel, escaping and at the same time returning back to those feelings of worthlessness.

3. The sweeter a person is, the more savage they are.

Although this is not always the case, the nicer a person is, the more shadow elements they are often repressing. Unless you are enlightened, it is often not the case that agreeable, easy-to-live-with people are complete saints. In fact, people-pleasers are often the angriest, depressed and anxious people around because they repress their less socially appealing elements into the shadow, and therefore become more internally savage and neurotic.

4. The quieter a person is, the louder they are.

The polarized personality temperaments of introversion and extroversion provide fascinating examples of paradox in human behavior. While extroverts are very vocal and socially gregarious, by themselves they are quiet, despondent and restless.

Because their outer worlds are so flamboyant and busy, their inner worlds are often empty and “quiet.” Similarly, while introverts are very socially reserved and silent, internally their worlds are filled with vibrant thought, imagination and liveliness.

5. The funniest people are often the saddest people.

We think of funny people, particularly social clowns and professional comedians, as being innately happy and good-humored people. But strangely enough the funniest people are often the saddest people because humor is often used as a defense mechanism against darker emotions.

Just look at Robin Williams, Jim Carrey, Spike Milligan, Stephen Fry, Bill Hicks, Peter Sellers and many other comedians who have either killed themselves, suffered from depression, or other major mental illnesses.

Aside from humor being used to mask deeper issues, comedians are usually immensely intelligent people who can easily see through the lies and illusions of society, using incisive wit to captivate their audiences revealing the nature of humanity’s true insanity.

These are only 5 examples of paradox that can be seen in mankind, but there are many others out there that I haven’t included in this article. It is humbling to realize that you can’t really take anything or anyone at face-value, because often there are many deeper forces at work.

What other famous examples of paradox in human behavior have you observed?