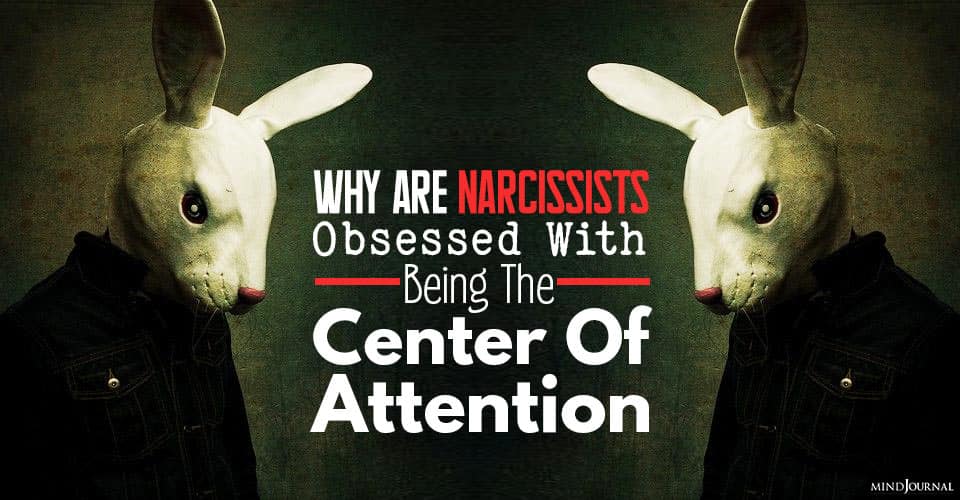 People high in narcissism tend to have a distinct preoccupation with being the center of attention. They are highly skilled at making themselves the star of the show, whether by writing the script themselves or hijacking another person’s scene.

To be clinically diagnosed with narcissistic personality disorder (NPD), one has to meet five of these nine attributes, according to the DSM-5:

Narcissism (not NPD), however, is a trait that appears on a continuum across the population, and so it is entirely possible for someone to have narcissistic traits but not be a diagnosable “narcissist.”

Every individual, at any moment in time, though, has a choice in their actions. Those choices, and the corresponding actions, separate the narcissists from the non-narcissists. Those who act and react primarily with empathy—those who can put another person first, not automatically assume blame or praise for themselves, or not exploit or intentionally hurt someone—are not narcissists.

Related: 5 Things Narcissists Do To Be The Center Of Attention

The Star of the Show: Themselves

The most important person in the life of a narcissist is the narcissist. They can temporarily put others ahead of themselves, but only when they somehow benefit from it. Children, partners, friends, and even coworkers are often allowed in the narcissist’s orbit only for their own personal gain.

Narcissists often feel as if they must remain the center of attention in anyone’s life. Relationships often serve the purpose of boosting the narcissist’s status. For example, they may not necessarily want to become a parent, but may change their mind when they realize that with it comes a rise in status and recognition—and the new title of “mom” or “dad.”

Their relationships tend to be defined by status, photos, trophies, milestones, and perfect social media appearances (Sauls et al., 2019). Behind the scenes, though, a romantic partner may be constantly degraded and devalued.

If a narcissist breaks up with a partner, that partner may even find that they’re not left alone to move on healthily. Unless that person goes full no-contact or obtains a restraining order, there is a chance that the narcissist may stalk them, and any new dates, on social media, and continue to dangle the promises of changing for the better in a desperate bid to get their attention back.

Even if a narcissist doesn’t want you, they may still believe you could not want anyone other than them. Narcissists tend to be naturally jealous, and perceived rivalry can attack their fragile sense of self-worth (Geukes et al., 2017). When an ex begins dating again, the jealousy can inflame to dangerous proportions.

It may seem that someone who is especially high in narcissism cannot love anyone except themselves, which is a tedious and unpredictable relationship. They may have high yet fragile self-esteem. They may dislike themselves and privately pick apart their flaws, but still not take the blame or responsibility for anything negative because they are sure they are unique and special.