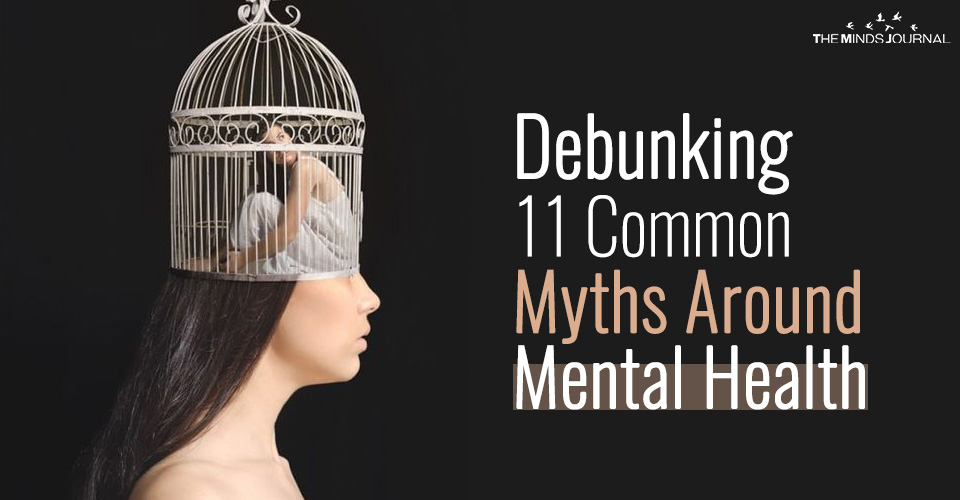 Despite how common mental health problems are, many of us still believe things about them that just aren’t true.

Knowledge surrounding mental illness and mind health is gaining momentum on one hand and on the other, several people across the globe are still muddled in it’s myths which is preventing them from coming forward with mental health issues which can be easily treated.

How many of us have our anxiety issues disabling us on a functional level or repetitive unwanted thoughts interfering with our productivity?

Do we stop to think if we have a way out of this?

If you count yourself among one of them who has in some way or the other been affected by mental issues, you know mental problems are real and equally incapacitating as physical illness. And you are not alone.

Every one in four people is affected by mental illness. A recent index of 301 diseases found mental health problems to be one of the main causes of the overall disease burden, placing mental disorders among the leading causes of ill-health and disability worldwide.(1)

So, it is easily understandable where we currently stand with this global health concern.

Why is debunking myths around mental illness a necessity?

Many mental health professionals, mental health institutes and organisations across the globe is holding mental health awareness programmes to promote the significance of treatment for mental disorders, resulting in a successful rise in understanding around mental illnesses.

Why is mental health issues still a disabling factor worldwide, even after such active measures being taken to demystify it?

There are many who mentally suffer, daily, dragging themselves through life, believing that there is no way out of these ‘problems’.

This neglect related to mental illness also comes from the very fact that we generally have a lackadaisical attitude towards our mental health altogether. This attitude can be attributed to the fact that mental illness is still not completely understood, are ignored and considered a taboo.

According to the statistical analysis of World Health Organization (WHO), nearly two-thirds of people with a known mental disorder never seek help from a health professional because they get victimized for their illness and become the targets of unfair discrimination and stigma.

Not only the mentally ill but their family members, relatives as well as professionals providing specialized care, are still the object of marked stigmatization around parts of the world. This kind of debilitating ignorance around mental illnesses prevent care and treatment from reaching people with mental disorders. It is found that current treatment coverage ranges from 15 to 45%, therefore leading to a gross under utilization of services.(2,3)

Did you ever wonder what our mortality rate would be if this kind of ignorance shrouded physical illnesses?

These kinds of attitude towards mental illnesses are deeply rooted in society and not only limit our knowledge but also makes it difficult to promote general health.

This article will throw light on 11 most common myths around mental health people still stick to believing and try bursting them.

1. Myth: Mental illness can only affect ‘other people’.

Mental illnesses never discriminate on the basis of caste, creed, age, gender or race; it can be you, me, your close ones and even mental health care professionals – anyone can have mental health related problems.

As already discussed earlier, mental illnesses are more common than we think it to be. One in every four American adults suffer from a diagnosable mental disorder in any given year. (4)

According to WHO, 10-20% of children and adolescents worldwide is a victim of mental disorders. Half of all mental illnesses begin by the age of 14 years and three-quarters by mid-20s. (5)

The most commonly diagnosed mental disorders in children are Attention Deficit Hyperactivity Disorder(ADHD), behavior and conduct problems, anxiety and depression.

3.Myth:  Once you are diagnosed with a mental illness you are ill for lifetime.

With a combination of pharmacological and psychosocial treatments and supports, between 70 and 90 percent of individuals have a significant reduction in symptoms and improved quality of life.(6) Therefore, complete recovery from mental illness is absolutely possible.

4. Myth: As a layman, I cannot do anything for people with mental health care needs.

Here are a few things you can do:

5. Myth: Mental illness is the same as mental retardation.

No. They are not. These are two completely distinct conditions.

A diagnosis of mental retardation is characterized by limitations in intellectual functioning and difficulties with certain daily living skills.

In contrast, people with mental illness have varied intellectual functioning, just like the general population but have mild to severe disturbances in thought, mood  and behavior, resulting in an inability to cope with daily life’s demands and routines.