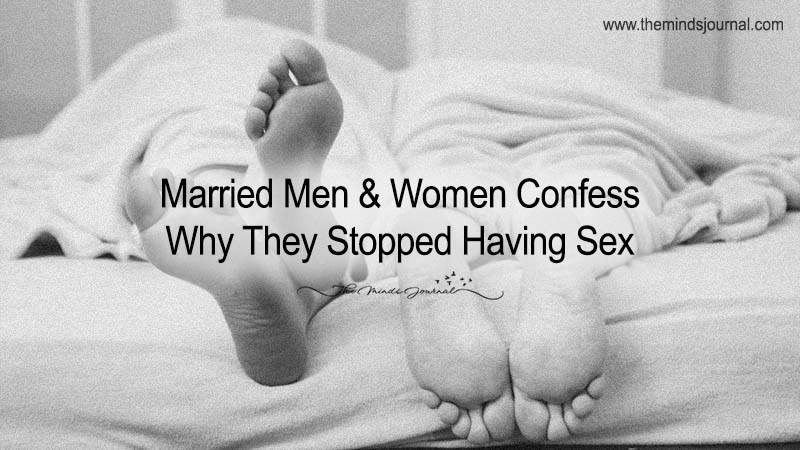 $ex is an integral part of any romantic relationship. Most couples crave love and intimacy while they are at a marriage or a live-in relationship.

But things can get untoward in a cozy relationship with a partner unwilling to have sex or with other problems cropping up. The romance and passion may lose its sheen and the lust for more seems a thing from the past.

Here are 15 excerpts why people in relationships have fallen apart due to lack of Sex:

“We’ve been together since the mid 80s, so there’s that. I still find her very attractive, but she has 0 interests.

Until last fall we were still doing it, but over the past four or five years it had gotten to the point where I could tell she was only doing it for me, and I began to feel as though I was essentially raping her.

I never forced myself on her, but her lack of enthusiasm (to the point of curling up when facing me so I could not see or touch her breasts or vagina) made me feel like a total creep. I was frank with her.

She claims she wants to continue, but I just don’t believe it.

If I made her dinner every night and she hardly touched it, over time I would get the impression she didn’t like my cooking.

Why make the effort if it’s not wanted?

My wife has been like this since I’ve known her, it being much worse as time passes. We’ve been together 16 years so not as long as yourselves, but there have always been issues there, so I guess I’ve been wrestling with the feelings that you are getting from here for at least a decade or so.

That feeling of ‘raping her’ I’ve had that happen several times, where they are verbally encouraging you but their body is straining to eject you from its premise.

Even when things are working there is always a forearm or leg or something providing constant back pressure against me to clear her space. That feeling that you are never quite invited in.

She is completely unaware she is doing it unless I point it out, and even then she struggles to stop pushing away, it is basically a reflex. Anyway, for a long while I felt like shit about myself.

Like I remember my ex’s when I was younger how they were basically an instrument I could play skillfully to make them play all sorts of notes, my wife is basically like some puzzle box filled with traps that will snap shut if you make one millimeter of movement in the wrong direction.

I don’t know if you guys have talked about it at all or tried to get to the bottom of it. After many years of being good talkers I think I at least get to the mental process going on there.

For her it stems from a horrible body image. In high school before I knew her she had an eating disorder, and since I’ve known her she has never had any eating issues (thank god for me) the mental process of someone with an eating disorder is firmly installed.

She is disgusted by her body. So the thought of having her clothes off already is a big issue.

In her day to day she will use a towel while changing after a shower so she doesn’t have to see herself.Just a glimpse will put her in a bad mood, so having to do that to be intimate is already the first nail in the coffin.

Now when you are pleasing your partner and kissing them anywhere?

Well, it draws attention their attention to their body. If you hate everywhere on your body, you aren’t making them feel good, but instead making them aware of everything they hate about themselves. Foreplay is torture, not fun.

On top of this your wife loves you. She hates what she is doing to you, because she can see and feel your frustration. She wants to be the woman you want her to be, to just do this thing that should be easy, but she can’t.

This is what my wife is going through in her head. Everybody is now conditioned for disaster in the bedroom.

Turning up emotions you bury during the date, confronting your hurt body image, disappointing your husband, the feeling of not being able to be ‘normal’ for him, that one hour TV program certainly sounds like a nicer way to de-stress than dealing with all that.