432 Hz vs 440 Hz Frequency Response: Why You Should Change The Frequency Of Your Music 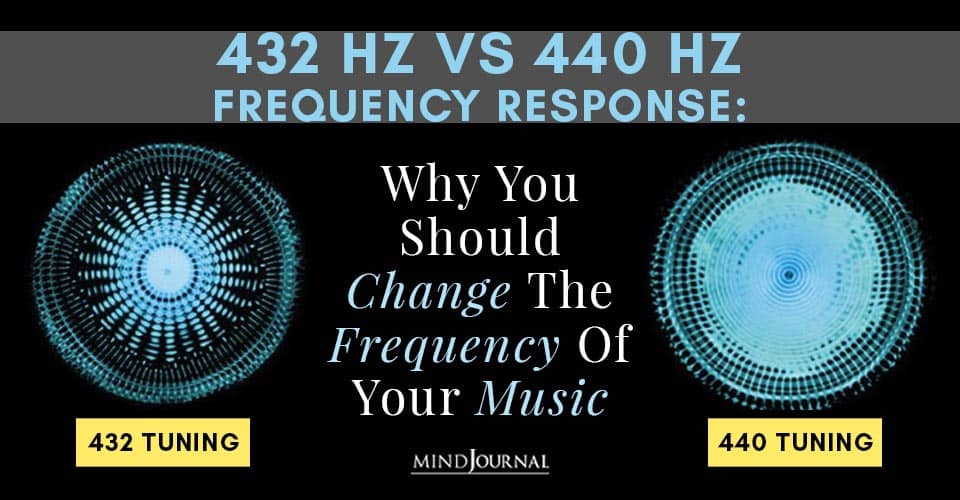 It’s scientific fact that everything, including the human body, is made up of energy that vibrates at different frequencies. As such it just makes sense to question how sound frequencies can affect us.

The evidence suggests that sound frequencies can indeed affect us, as frequencies affect other frequencies. Think of it as being how ingredients affect the flavor of a meal. To illustrate this, there have been a number of experiments, such as cymatics and water memory, that show us the effect of frequencies on the physical world.

Related: Choose One Hologram And Find Out What Your Vibrational Frequency Is Trying To Tell You

Cymatics shows us that when you play sound frequencies through certain mediums, such as air, water, and sand, they can directly affect the flow of matter. You can see the results of the effect for yourself.

Water memory has a similar principle. It shows how not just sound, but also intent, can affect the vibration of matter. This effect was proven by Dr. Masaru Emoto who performed numerous studies showing this effect. Everyone has their own vibrational frequency and the human body is estimated to be around 70% water.

Given the experiments outlined above, it only makes sense that musical frequencies could affect the vibrational state of humans. Everything expressed through sound, emotion, or thought has a frequency of its own that affects the world around it. Just how one drop of water can create a large ripple and affect a huge body of water.

The Frequency of Music

Let’s take this concept and look at music frequency. Most music produced in the world is set at the frequency of A=440hz after the International Standards Organization (ISO) promoted the idea in 1953.

However, it’s possible that when you look at the overall vibratory nature of the universe that this pitch is actually disharmonious with the natural resonance of nature. As such it could actually lead to negative effects on human behavior and consciousness.

There are theories that the Nazi regime planned on using this pitch after scientific research showed them which frequencies were best for inducing feat and aggression. It may be an unproven conspiracy theory but it is true that some studies have shown that music should be turned to A=432Hz instead.

Golden Mean and the Universe

It’s believed that the 432Hz frequency response is mathematically consistent with the patterns of the universe. 432Hz is said to vibrate with the golden mean PHI of the universe and unify light, time, space, matter, gravity, and magnetism with biology, the DNA code, and consciousness.

Resonating our atoms and DNA with nature leaves us with an even deeper connection to nature and the world around us. The number 432 is also significant as it is reflected in the ration of the sun, Earth and moon as well as the precession of the equinoxes, the Egyptian Great Pyramid Stonehenge, Sri Yanta and other sacred sites.

Something else to consider is that A=432Hz correlates with the colour spectrum; something that isn’t true of A=440Hz.

It’s said that every frequency in the spectrum is related in octaves from gamma rays to subharmonics. The colors and notes are also connected to the chakras in the body and other important energy centers.

If people are to understand chakras are connected to the Seven Rays of the Solar Spectrum then we understand the importance of using the right notes and frequencies. The Cosmic Keyboard or Cosmic Pitchfork is tuned at A=432Hz, not the standard A=440Hz. On the Cosmic Keyboard C# is set at 136.10Hz “Om”. This is the main note of the classical Indian Sitar and the pitch of the chants the Tibetan Monks sing. The Monks say that the note “comes from nature”.

Related: 432 Hz – The Hidden Power Of Universal Frequency And Vibration

It’s about time we explored the differences between A=440Hz and A=432Hz frequency response. Music lovers and musicians have all noticed that when music is tuned in A=432Hz it sounds more beautiful and is more harmonious and produces an inward experience that we feel in the heart and spine. When music is tuned at A=440Hz feels more outwards and more mental experience. You feel it in your head and it projects outwards. Audiophiles have also noted that A=432Hz music can fill up an entire room while music in A=440Hz is far more local and linear.

So change the frequency of your music the next time you listen to it and hear the difference for yourself!