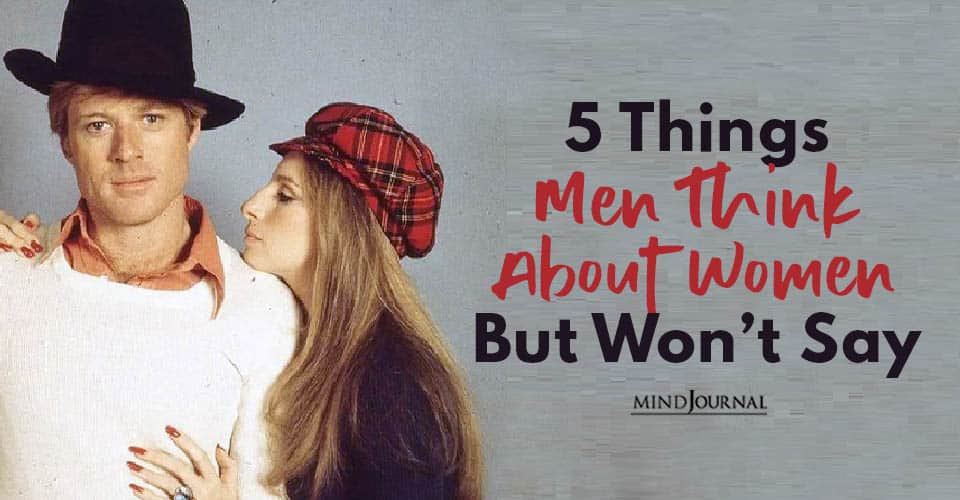 In a desperate effort to understand what men think about women, you might fantasize about swinging a hammer at a man’s head, cracking it open, and watching in awe as his innermost thoughts spill onto the floor.

[Please don’t do this. There are better ways.]

It can be extremely frustrating not knowing what men think about women… or what they think about you in particular.

You: Hey baby…whatcha thinking about?

You: [later] What does that MEAN, “nothing??!” No one thinks about nothing!!

If the male mind is as puzzling to you as a Rubik’s Cube, you’re going to love this video and article.

In today’s video, I’m going to give you what men think about women in five easy bite-sized nuggets. Now, I’m betraying my people a bit, because these are things that men are thinking, but in no way want you ladies to know they’re thinking them.

These are the things that will get us kicked, punched, and generally put on your shit list.

Once you know the deeper psychological reasons behind why men think the way we do…and what men think about women… it’s like discovering a secret door into your guy’s brain.

There’s plenty of benefit for you once you know these five secrets men think about.

Knowing what men think about women can save you the agony of getting sucked into a toxic relationship because you’ll be on top of what’s going on in his crazy twisted head and can get out before you get hurt.

It can allow you to relax and leave space for men to truly be themselves. Once you can let go of trying to be a mindreader and figure out what’s going on in that 8-pound hunk of thinking muscle, you change as a romantic partner. You’re cooler and less stressed.

That will make any man uncontrollably addicted to you.

Who doesn’t want that, right?

Here’s the Catch 22. Women struggle to understand what men think about women…and sometimes waste a lot of energy trying to guess or make their dudes tell them.

What are you really thinking? Not “nothing.” Tell me. TELL MEEEEEE!

Guys hate this. They cannot stand a woman poking at them to “talk about their feelings.” And yet, many of us suck at doing so. We know you’d leave us alone if we were better communicators, and yet we don’t know how to be.

And here’s a secret: a lot of the time we really are thinking nothing. I mean, not 100% black hole or anything, but do you really want us to say well, I was thinking that I needed to go home and do laundry or I was regretting eating that bean burrito last night.

Sometimes we’re embarrassed that we aren’t thinking something profound that we could proudly share with you, so we say nothing.

Hey, it’s better than lying and saying, oh baby, I was thinking about how much I utterly adore you.

C’mon. You don’t want us telling you what you think you want to hear, do you? Wouldn’t you rather we be honest, even if we have nothing of consequence on the brain?

And sometimes we’re thinking something that is going to piss you off. Truly.

The whole does my butt look fat thing? There’s no winning that one. So if we know what’s good for us, we’ll keep our big traps shut.

Still, you asked, so I’m going to tell you what men think about women…even if it pisses you off.

So now let’s look at what men think about women, but won’t say out loud.