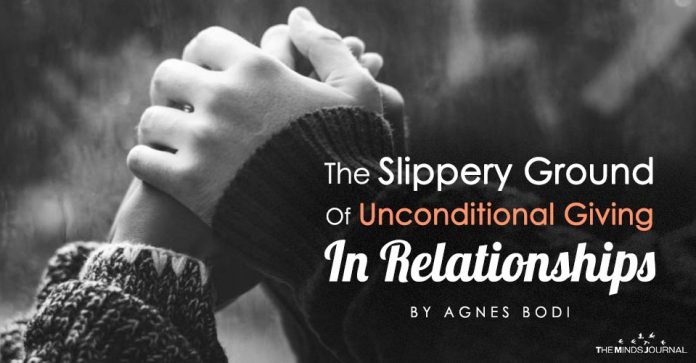 The Slippery Ground Of Unconditional Giving In Relationships

A recent experience in love led to nowhere but the destruction of my healthy self-image, and it taught me a lesson that can be resourceful to many.

So now I will share with you the treasures I found in a box full of weapons licensed to kill.

One and a half years ago I met one of my brothers in spirit. Seeing each other on a daily basis in an active and fun work environment, I had a chance to experience myself in ways not known to me before.

Functioning on higher frequencies, I became the fuller and a complete version of myself. My heart emanated unconditional love; acceptance and understanding were a natural state of my spirit and mind united into one force. Both were springing within me effortlessly whenever the circumstances asked for them.

I loved myself; I loved him; I was joyful every hour of the day. Clouds happened but I did not feel their shadows. I lived in an unbreakable unity.

Yet we never became a couple those three months spent side by side. We manifested love but not as lovers. Shortly after, these circumstances came to an end. I was preparing to move to London while he left for Spain. Only once he was gone did he call and confess his love. Before this point, he ran from it. He told me he wanted “to go alone”. Trying to let go proved useless during our months apart. Our feelings were strong, deep; we experienced each other’s beings deeply, regardless of the boundaries of space. What we had was incomparable and unbeatable. I knew its worth. We held onto the light of love and union and both benefited from its gifts.

Later time proved that what he omitted to say, and I omitted to recognize, was that he was unready, incapable of giving in a concrete relationship, of cultivating and taking the responsibility for one. He did not give us the chance for a manifestation of our beings in one, actively, day by day.

Plus the fact that he still wanted to “go alone”.

All this time I never stopped giving, and was very good at it, hoping, building, nurturing, finding and cultivating ways for us. He eagerly accepted the daily dose of love that I kept submitting to him in very creative ways.

But eventually, my inner strength dropped. I lost my appetite for life. It is very dangerous for a woman to maintain a long distance love relationship because structures of her soul are constantly projected on the loved one, causing her to lose the benefits of her own soul energies being with her, nurturing her own life, and opening her own doors toward meaningful experiences. Men tend to practice this kind of soul connection to a lesser degree and intensity compared to women.

We finally managed to share some time together, but we only had ten days to figure things out and experience each other. Strong feelings of familiarity, glimpses of unity, “knowing”, tenderness of heart, and love, but also pain, separation, confusion, pushing away, and running were all part of those ten days.

At the end of it, I was again told he wanted “to go alone”, that it was not the right time.

Although painful, my story led me to a very big screen full of lessons of self-mastery.

Before I start the projection of that screen onto paper, I would like to mention, that when I began this article, on the 28th of September 2015, we were living in the eclipse to which the Twin gateway is linked—a project of the Universe that is meant to work on reuniting those of spiritual brotherhood on the physical plane as well. My attention had been drowning to the topic the past few days, and then while confessing my feelings to one of my friends, the sky showcased the most beautiful rainbow in a full arch on the “screen” in front of my house in Corfu…and a few minutes apart a second one right above it! It’s twin!

There are some couples out there whose relationship doesn’t have any romance in it at all or the romance has decayed over time. Are you one of them?
Read more
wpDiscuz
4
0
Would love your thoughts, please comment.x
()
x
| Reply