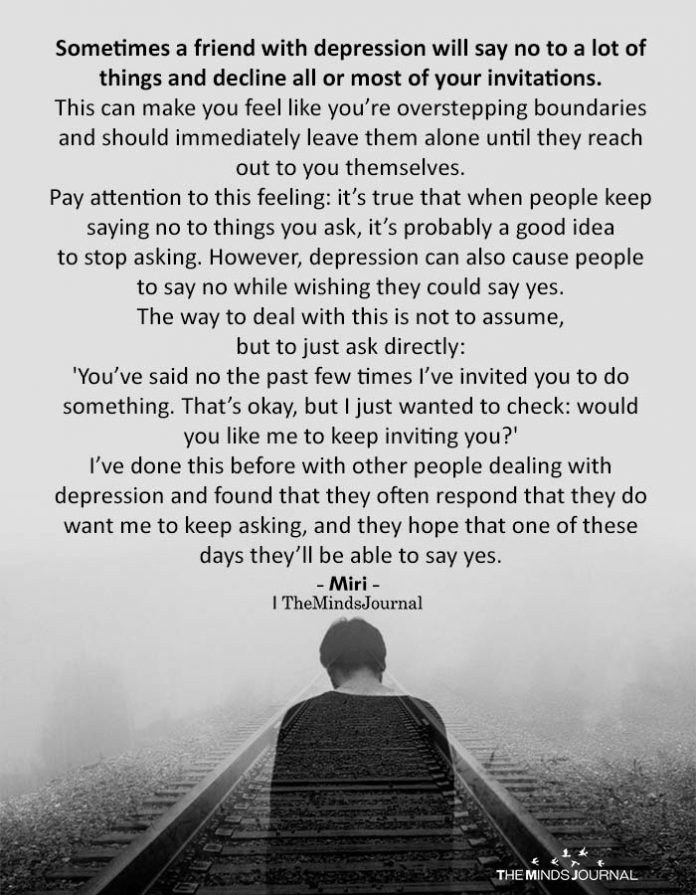 Sometimes a friend with depression will say no to a lot of things and decline all or most of your invitations. This can make you feel like you’re overstepping boundaries and should immediately leave them alone until they reach out to you themselves. Pay attention to this feeling: it’s true that when people keep saying no to things you ask, it’s probably a good idea to stop asking. However, depression can also cause people to say no while wishing they could say yes.

The way to deal with this is not to assume, but to just ask directly: ‘You’ve said no the past few times I’ve invited you to do something. That’s okay, but I just wanted to check: would you like me to keep inviting you?’ I’ve done this before with other people dealing with depression and found that they often respond that they do want me to keep asking, and they hope that one of these days they’ll be able to say yes.”

Those who escape hell however never talk

Everything's not what it seems to be or doesn't seem to be.
Read more
Thought Cloud

There Comes A Time When Silence Is Betrayal

Just because it doesn't happen to you doesn't mean it isn't .. We cannot choose to stay silent! #blacklivesmatter #georgefloyd
Read more
wpDiscuz
0
0
Would love your thoughts, please comment.x
()
x
| Reply