Why Sometimes Saying “No” To Your Kids Is So Important 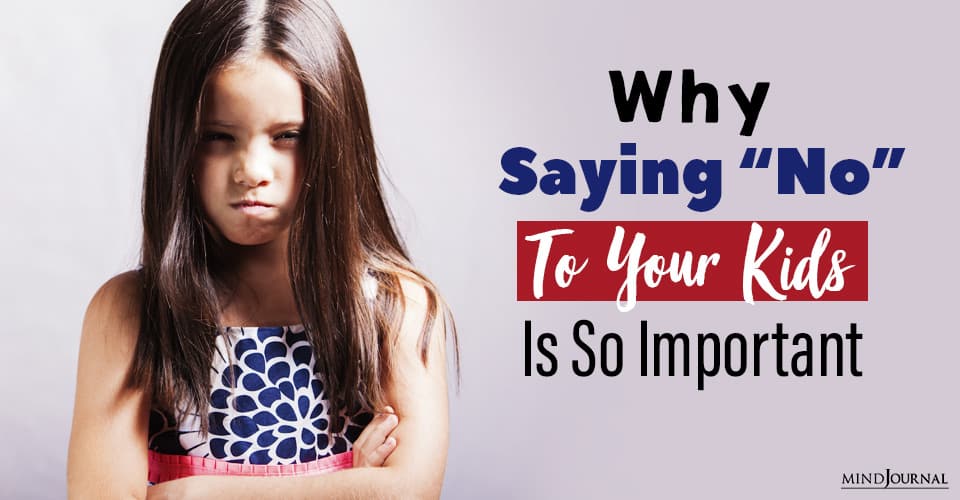 Are you struggling to say “no” to your kids?
Learning to deal with not getting whatever they want is an essential life skill.

Parents who are afraid to put their foot down usually have children who step on their toes. —Chinese proverb

Believe it or not, parents do their children a tremendous disservice when they don’t give them the experience of being told “no.” For many parents, it’s consistently enticing to say yes to their children’s wishes—particularly if they can afford to gratify those wishes, but often even if they really can’t. Parents naturally want their kids to be happy.

However, the happiness provided by material things is fleeting at best, and research shows there’s a deviation-amplifying side to needing to have the next new “thing,” be it the must-have toy of the moment or the latest smartphone model. It fosters a sense of deficiency that can only be sated temporarily.[1]

Your kids may be extremely grateful when they first receive the new “hot” item, but all too frequently that fades to black as soon as the next new hotness hits the market. At that point, in the minds of such kids, what they have is quickly rendered obsolete and deeply unsatisfying. And, if you give in and get your kids that newest hotness, when the next iteration becomes available, the dynamic is repeated. This becomes an ongoing vicious circle that creates unhappiness and dissatisfaction.

Among the most valuable lessons you can teach your kids is that genuine happiness isn’t found in getting what you want; it’s embedded in appreciating and making the most of what you have.

Learning how to deal with not getting what you want and when you want it is an essential skill that everyone needs to develop.

There Are A Range Of Reasons Many Parents Are Loath To Set And Enforce Limits With Their Kids:

Do any of these resonate with you?

Even for parents who, for whatever reason(s), do everything they can to avoid saying no to their kids, there will inevitably come a point when they want to and must impose limits. This will be a new form of hell for all involved. When your children are accustomed to being overindulged, not getting whatever they want inevitably feels to them like deprivation.

Saying No Is A Form Of Setting Limits.

Naturally, your kids will test the limits you set and test you to confirm whether or not those limit are for real. They may beg, plead, whine, cry, tantrum up a storm, get extremely angry, or all of the above. Partly this reflects their distress at not getting what they want, but they also want to see if they can get you to give in.

If you give in, you send the message to your kids that “no” doesn’t necessarily mean no, and that if they beg, plead, whine, or cry, they’ll get what they want. Giving in reinforces your kids’ cringe-inducing behavior, making it more likely to recur and more difficult to extinguish.

The slipperiness of this slope can’t be overstated. If you are firm and hold to the limits you set consistently, your kids will progressively learn to accept those limits much more easily and quickly.

It’s helpful to know that when you say no, there needn’t be a lot of drama. Being straightforward and steadfast while injecting a touch of lighthearted humor can make this process relatively painless.

My daughters’ mother and I routinely used phrases like “Get real, Neil,” “No way, Jose,” “No chance, Lance,” and “Nope, not happening.” We repeated these responses matter-of-factly as necessary—like a mantra or a song stuck on repeat—and it proved extremely successful in helping our daughters learn to accept that, in those cases, they weren’t going to get whatever is was they wanted.

If there are two (or more) parents involved, obviously it’s critical for them to be in agreement when it comes to setting and enforcing limits. Conflict between parents usually causes them to undermine each other and sends mixed and confusing messages to their kids.

Moreover, kids who are adept at learning how to play one parent against the other figure out which parent to go to in order to maximize the chances of getting what they want. This area becomes more complex when the parents aren’t together, but it’s in the best interests of their kids for parents to strive to sing from the same sheet of music to the maximum extent they can.

Related: How To Stop Being Manipulated by Your Adult Child: Manipulative Child Behavior

Children need structure and limits, and parents need to have the courage and strength to risk and withstand the emotional onslaught of their children’s frustration, sadness, anger, and other forms of upset. This is a form of distress tolerance and can be incredibly difficult for many parents.

I don’t know any parent who enjoys it when their kids are angry at them, but if you continually give in to your children’s wishes and desires, doing whatever they want and getting them whatever they want, it creates an unrealistic expectation of how the world works. They learn to see the world as existing to serve their perceived needs, making it harder for them to be successful in the future, under circumstances indifferent to those needs.

Children need to have the experience of learning how to delay gratification and cope with the limits placed upon them. The resilience your children develop from such experiences lasts a lifetime, whereas the anger and upset they direct at you is only temporary.