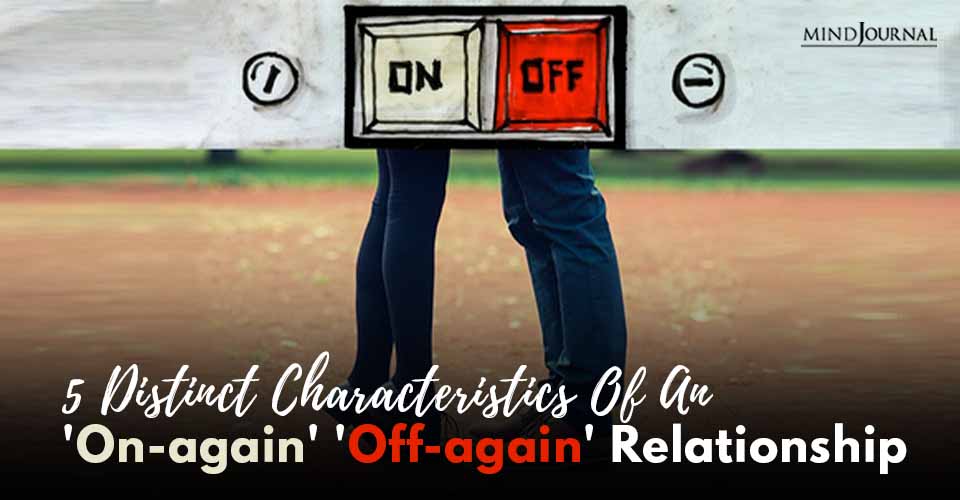 Romantic relationship, according to experts, goes through different trajectories of transitions. One of these is on-again-off-again relationships. You might have come across at least one person who you have seen running into their ex’s arms like nothing happened two months back. For some, the break-up is not a transition at all, it is, in fact, a part of their relational pattern.

Once they believe nothing is really working out, they break up in the hope of finding peace, only to readily find themselves drawn to their exes once again. So they patch things up, with the optimistic view that things will soon brighten up.

No doubt, this time too, the chemistry does not get any better and things go off again. If this scenario seems evocatively familiar to you, then you must have come across an instance of an ‘on-off relationship’, which is sometimes addressed as ’cyclical relationship’ or ‘relationship churning’.

Most of us are of the belief that a relationship can only be either on-going or terminated. No grey areas in between. Couples, however, may go through the repeated process of relational development and dissolution with the same partner.

A survey of 279 same-sex and 266 different-sex couples revealed that about one-third of lesbian, gay, and heterosexual relationships have at some point broken-up and renewed their relationship. (Monk, Ogolsky, & Oswald, 2018).

This type of on-off relationship is typically a pattern of intimate relationships in emerging adulthood.

It is during emerging adulthood that intimate relationships come to be one of the primary bases for emotional attachments in people’s lives, joining or even supplanting relationships with parents and friends. (1)

Now, the question is, why couples whose relationship is marked by negativity would be drawn to it once again? Why did they break up in the first place?

Some relationships come to an end, but later lead to reconciliation but those cannot be categorized in on-off relationships. In a reconciled relationship, partners have previous knowledge of each other’s pattern of interaction, these are not characterized by negativity like repeated conflicts, dissatisfaction, lack of commitment, disconnect, etc, which are some salient features of a cyclical relationship.

So, what exactly entails an on-again off-again relationship?

Related: 10 Ways To Know You’re Officially Over Your Ex

2. Uncertainty about the relational status.

The partners in such a relationship are also not always certain about when exactly their relationship ended, pertaining to their repeated break-ups.

People who had previously experienced an on-again/off-again relationship confessed:

“A big major stressor was the uncertainty. I wasn’t even sure myself if we were really broken up or not.”

“Not knowing whether we were completely not dating if it was okay to date someone else at that time.”

“The not being in control, the unknown of what was going to happen.”

Hence, it is understandable that the higher the indecisiveness regarding the termination of the relationship, the greater are the chances of reuniting once again.

Related: How to Get Your Boyfriend to Chase You Again