How Does It Feel Like To Die? – For the Curious 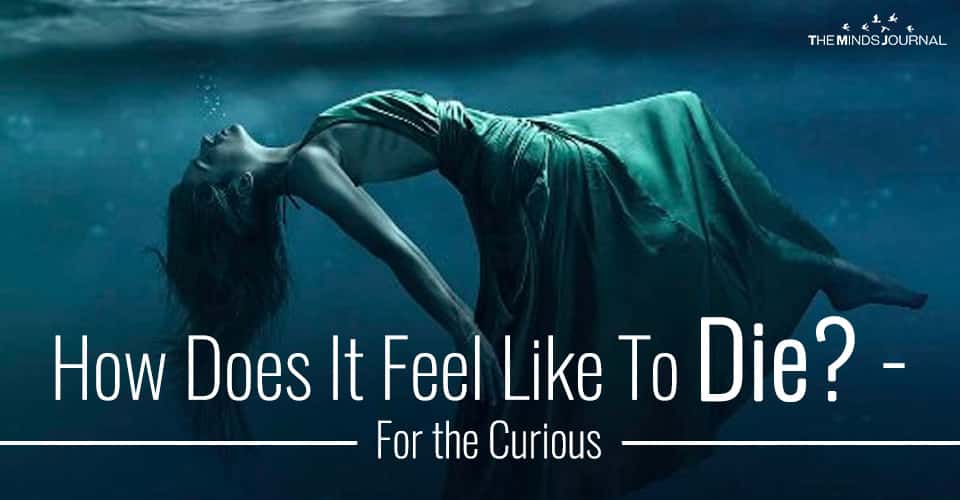 Is it distressing to experience consciousness slipping away or something people can accept with equanimity? Are there any surprises in store as our existence draws to a close? These are questions that have plagued philosophers and scientists for centuries, and chances are you’ve pondered them too occasionally.

None of us can know the answers for sure until our own time comes, but the few individuals who have their brush with death interrupted by a last-minute reprieve can offer some intriguing insights on how does it feel like to die. Advances in medical science, too, have led to a better understanding of what goes on as the body gives up the ghost.

Want to know about near-death experience and how does it feel like to die? Watch out this comprehensive conversation.

Death comes in many guises, but one way or another it is usually a lack of oxygen to the brain that delivers the coup de grâce. Whether as a result of a heart attack, drowning or suffocation, for example, people ultimately die because their neurons are deprived of oxygen, leading to the cessation of electrical activity in the brain – the modern definition of biological death.

Do you know anything about spiritual death? Read  12 Signs You’re Experiencing Spiritual Death (and rebirth)

If the flow of freshly oxygenated blood to the brain is stopped, through whatever mechanism, people tend to have about 10 seconds before losing consciousness. They may take many more minutes to die, though, with the exact mode of death affecting the subtleties of the final experience. Read on to know how does it feel like to die.

Typically, when a victim realizes that they cannot keep their head above water they tend to panic, leading to the classic “surface struggle”. They gasp for air at the surface and hold their breath as they bob beneath. Struggling to breathe, they can’t call for help. Their bodies are upright, arms weakly grasping, as if trying to climb a non-existent ladder from the sea. Studies with New York lifeguards in the 1950s and 1960s found that this stage lasts just 20 to 60 seconds. When victims eventually submerge, they hold their breath for as long as possible, typically 30 to 90 seconds. After that, they inhale some water, splutter, cough and inhale more. Water in the lungs blocks gas exchange in delicate tissues, while inhaling water also triggers the airway to seal shut – a reflex called a laryngospasm. “There is a feeling of tearing and a burning sensation in the chest as water goes down into the airway. Then that sort of slips into a feeling of calmness and tranquility,” describing reports from survivors. That calmness represents the beginnings of the loss of consciousness from oxygen deprivation, which eventually results in the heart-stopping and brain death.

The most common symptom is, of course, chest pain: a tightness, pressure or squeezing, often described as an “elephant on my chest”, which may be lasting or come and go. This is the heart muscle struggling and dying from oxygen deprivation. Pain can radiate to the jaw, throat, back, belly and arms. Other signs and symptoms include shortness of breath, nausea and cold sweats.

Most victims delay before seeking assistance, waiting an average of 2 to 6 hours. Women are the worst, probably because they are more likely to experience less well-known symptoms, such as breathlessness, back or jaw pain, or nausea, says JoAnn Manson, an epidemiologist at Harvard Medical School

Even small heart attacks can play havoc with the electrical impulses that control heart muscle contraction, effectively stopping it. In about 10 seconds the person loses consciousness, and minutes later they are dead.

Long the fate of witches and heretics, burning to death is torture. Hot smoke and flames singe eyebrows and hair and burn the throat and airways, making it hard to breathe. Burns inflict immediate and intense pain through stimulation of the nociceptors – the pain nerves in the skin. To make matters worse, burns also trigger a rapid inflammatory response, which boosts sensitivity to pain in the injured tissues and surrounding areas.

How does it feel like to die when burned to death?

Most people who die in fires do not, in fact, die from burns. The most common cause of death is inhaling toxic gases – carbon monoxide, carbon dioxide, and even hydrogen cyanide – together with the suffocating lack of oxygen. One study of fire deaths in Norway from 1996 found that almost 75 percent of the 286 people autopsied had died from carbon monoxide poisoning. Depending on the size of the fire and how close you are to it, concentrations of carbon monoxide could start to cause headaches and drowsiness in minutes, eventually leading to unconsciousness. According to the US National Fire Protection Association, 40 percent of the victims of fatal home fires are knocked out by fumes before they can even wake up.

Beheading, if somewhat gruesome, can be one of the quickest and least painful ways to die – so long as the executioner is skilled, his blade sharp, and the condemned sits still. Quick it may be, but consciousness is nevertheless believed to continue after the spinal cord is severed.

A study in rats in 1991 found that it takes 2.7 seconds for the brain to consume the oxygen from the blood in the head; the equivalent figure for humans has been calculated at 7 seconds. It took the axeman three attempts to sever the head of Mary Queen of Scots in 1587. He had to finish the job with a knife. Decades earlier in 1541, Margaret Pole, the Countess of Salisbury, was executed at the Tower of London. She was dragged to the block but refused to lay her head down. The inexperienced axe man made a gash in her shoulder rather than her neck. According to some reports, she leaped from the block and was chased by the executioner, who struck 11 times before she died.

People can bleed to death in seconds if the aorta, the major blood vessel leading from the heart, is completely severed, for example, after a severe fall or car accident. Death could creep up much more slowly if a smaller vein or artery is nicked – even taking hours. Such victims would experience several stages of hemorrhagic shock. The average adult has 5 liters of blood. Losses of around 750 milliliters generally cause few symptoms. Anyone losing 1.5 liters – either through an external wound or internal bleeding – feels weak, thirsty and anxious, and would be breathing fast. By 2 liters, people experience dizziness, confusion and then eventual unconsciousness.

A high fall is certainly among the speediest ways to die: terminal velocity (no pun intended) is about 200 kilometers per hour, achieved from a height of about 145 meters or more. A study of deadly falls in Hamburg, Germany, found that 75 percent of victims died in the first few seconds or minutes after landing.

The exact cause of death varies, depending on the landing surface and the person’s posture. People are especially unlikely to arrive at the hospital alive if they land on their head – more common for shorter (under 10 meters) and higher (over 25 meters) falls. A 1981 analysis of 100 suicidal jumps from the Golden Gate Bridge in San Francisco – height: 75 meters, velocity on impact with the water: 120 kilometers per hour – found numerous causes of instantaneous death including massive lung bruising, collapsed lungs, exploded hearts or damage to major blood vessels and lungs through broken ribs.

Survivors of great falls often report the sensation of time slowing down. The natural reaction is to struggle to maintain a feet-first landing, resulting in fractures to the leg bones, lower spinal column, and life-threatening broken pelvises. The impact traveling up through the body can also burst the aorta and heart chambers. Yet this is probably still the safest way to land, despite the force being concentrated in a small area: the feet and legs form a “crumple zone” which provides some protection to the major internal organs. Some experienced climbers or skydivers who have survived a fall report feeling focused, alert and driven to ensure they landed in the best way possible: relaxed, legs bent and, where possible, ready to roll.

In accidental electrocutions, usually involving low, household current, the most common cause of death is an arrhythmia, stopping the heart dead. Unconsciousness ensues after the standard 10 seconds, says Richard Trohman, a cardiologist at Rush University in Chicago. One study of electrocution deaths in Montreal, Canada found that 92 percent had probably died from arrhythmia. Higher currents can produce nearly immediate unconsciousness.

Suicides and old-fashioned “short drop” executions cause death by strangulation; the rope puts pressure on the windpipe and the arteries to the brain. This can cause unconsciousness in 10 seconds, but it takes longer if the noose is incorrectly sited. Witnesses of public hangings often reported victims “dancing” in pain at the end of the rope, struggling violently as they asphyxiated.

Death only ensues after many minutes, as shown by the numerous people being resuscitated after being cut down – even after 15 minutes. When public executions were outlawed in Britain in 1868, hangmen looked for a less performance-oriented approach. They eventually adopted the “long-drop” method, using a lengthier rope so the victim reached a speed that broke their necks. It had to be tailored to the victim’s weight, however, as too great a force could rip the head clean off, a professionally embarrassing outcome for the hangman.